Donor Spotlight: How the Haefeli’s Hope to Inspire the Next Generation of Giving 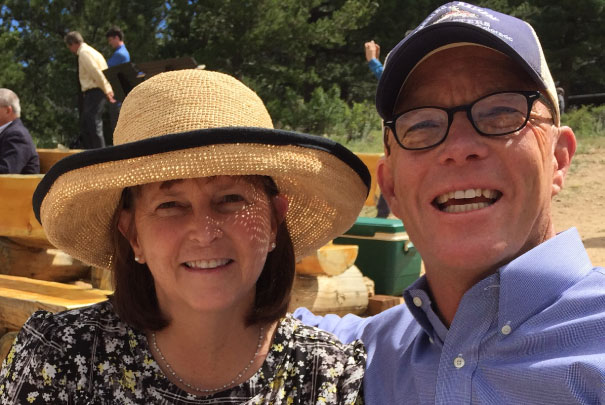 “We’re very, very blessed and everyday we’re very thankful for what’s going on in our lives,” John W. Haefeli ‘86 says. “I look around today, and I feel thankful that I can give.”

Active supporters of not only UNC, but Greeley-Evans District 6 and number of other community organizations, John and his wife Delia ’90 believe strongly in the importance of paying it forward.

“It is important. Our community is better because people give and want to make it a place for people to come and learn,” Delia says. “John’s mom was very influential and did lots of philanthropic things in Greeley. I was on the receiving end of that growing up and knew that I was going to get on my feet eventually as an adult and give back.”

That’s exactly why they’ve established the Haefeli Family Scholarship Endowment. Both educators themselves, the Haefelis are pleased to lend a helping hand to students in the School of Teacher Education.

“We believe in education. It’s really important to us to pass on the ability for people to go to school, and to impact their future students in our society,” John says. “We don’t have any biological children and I think that if you can assist somebody else and leave a legacy for your family, that’s really a positive thing.”

Among the people who have inspired Delia and John are Greeley philanthropists Harold and Florence Winograd, Helen and Mike Geile, Bob and Betty Tointon, Holly and Scott Ehrlich and Julianne and Joseph Haefeli.

Delia and John hope their example may one day inspire others too, that’s why one of the key requirements for the Haefeli Family Scholarship is a strong record of community service.

“We’re in a position time wise and financially that we can give, and I think that’s something that’s important for all of society. When you have people who give expertise, time and monetary resources, I think in many cases you hopefully become role models who others want to emulate,” John says. “With some of these scholarships the recipients don’t have to give back, but I think it’s important to develop that habit and taste because too often in our society, people don’t want to. I think if you create that habit at a young age, it’s a good thing.”

“It doesn’t have to just be monetary,” Delia says. “If you’ve got time and talent, you still have the capacity to give. It doesn’t just have to be money. There’s a wide variety of places that anyone can show their support, it’s not just the school district or UNC. There are lots of needs out there so if you can find one that fits your interest, that’s great.”