Slightly sour with a tart taste, kefir isn't exactly the number one go-to food for a snack; however, this fermented milk beverage may help reduce inflammation and improve the gut and digestive system of cancer patients who have a chemotherapy history.

Earlier this year, uBiome awarded a $7,000 grant to researchers at the University of Northern Colorado's Cancer Rehabilitation Institute (CRI) to understand how kefir impacts the microbiome of cancer survivors who underwent chemotherapy and/or radiation treatment.

Kefir is a fermented milk beverage with low levels of lactose and high levels of probiotics that stay in your intestines and gut longer, so it's like a "super-powered yogurt that sticks," according to Laura Stewart, Ph.D., a professor of Sport and Exercise Science. 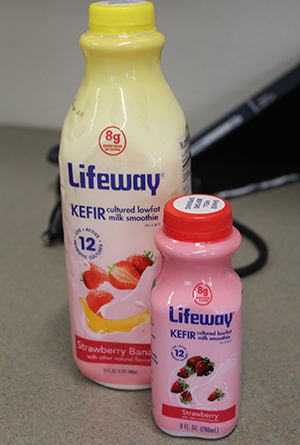 Above: Bottles of flavored kefir given to cancer patients at UNCCRI.

Photo at top: UNC doctoral student Peter Smoak holds a bottle of kefir outside the UNC Cancer Rehabilitation Institute (UNCCRI). Smoak is leading the study on the potential impacts kefir has on the microbiomes of cancer patients who have a history of chemotherapy. 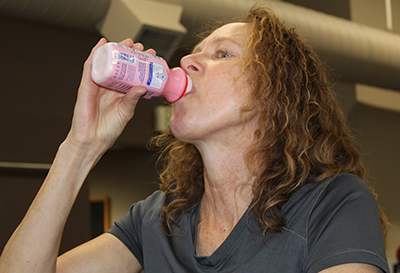 It's not uncommon for cancer survivors to have an altered, intestinal microbiome because of the chemotherapies and other treatments they undergo. These treatments can cause inflammation and alter immune functionality and gut dysbiosis in cancer survivors; thus, affecting their recovery. Kefir may be the solution to these issues due to promoting healthier microbiomes. (Photo at left: Patient drinking strawberry-flavored kefir at the UNCCRI) 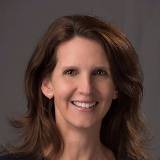 "I think there have been a lot of probiotic-type studies in cancer-survivor populations, but this is probably one of the first ones that’s done with kefir used as a recovery beverage in a physically active cancer survivor," said Stewart (photo at right). "I know it is a small population [being tested], but we can glean a lot from how these individuals respond [to the kefir]."

Founded in 2012, uBiome’s mission is to transform the science of the microbiome into useful products and services that improve people’s lives. This research is also supported by The School of Sport and Exercise Science and UNC’s Research, Dissemination & Faculty Development Program.

Listen to Stewart discuss the grant and research in more depth in the following podcast:

Listen to Smoak's Bear-in-Mind Podcast episode for further insights of his research on the possible benefits of kefir for patients with chemotherapy history.

Follow along with Stewart's podcast with the below transcript:

Hi, I’m Katie Corder, the creative content producer at the University of Northern Colorado. I sat down with Professor Laura Stewart to discuss a recent grant awarded to the UNC Cancer Rehabilitation Institute for research on the potential benefits of kefir for cancer patients who undergo chemotherapy or radiation treatment.

Kefir, a fermented milk drink, may help reduce inflammation and improve functionality of the gut and digestive system, so this study is trying to understand if consuming the beverage decreases inflammations and other side effects that come from cancer treatments.

In this podcast, Dr. Stewart goes into more detail about the grant, the research being led by UNC doctoral student, Peter Smoak, and the possible benefits of drinking kefir from a cancer patient’s point-of-view.

Can you describe the grant that the UNC Cancer Rehabilitation Institute received including how much, when and for what?

We received a grant for a little over $7,000 dollars to explore the microbiome of cancer survivors at UNCCRI. Kind of the inception of this project started with a doctoral student named Peter Smoak in my lab. He has been fascinated with how a cancer survivor’s microbiome responds to exercise. My interest has been, and background has been in exploring probiotic substances, so my background is in nutrition. Kefir has kind of emerged as one of those amazing probiotic potential products that might confer a lot of benefits. The nice thing about kefir is that it has a lot of the lactose in milk digested down, or almost away, so that it makes these dairy-based beverages a little bit more tolerant to someone who might be sensitive to lactose and maybe avoid dairy.

Kefir’s got a lot of probiotic activity in it as well as kefiran. The kefiran that is a part of this product actually helps these microbes stick in the gut. So instead of just eating your daily yogurt and your intestine and your GI tract kind of losing that benefit, preliminarily studies suggest that kefiran will help those microbes stick in the gut and stay in the gut. So, once we found out that the cancer survivors at UNCCRI were open to drinking it, our next phase was to look at using it in an intervention, and so we put together a little project where we would give kefir to the cancer survivors as they were going through their exercise training program at UNCCRI. And, it is awesome that UNCCRI wanted to work with us because they have got a great program that is based in the community and has people come from all over to come and exercise train with students and the professionals at UNCCRI. So, they get their exercise training done there and while they’re there, a number of them have elected to participate in our study, and they are actually drinking kefir after their workouts. And so, initially we take a lot of measurements on how fit and how healthy they are, and then after 12 weeks we bring them back in and we do a reassessment and during that 12-week period they’re actually drinking the kefir. So, we have people who are drinking the kefir and we have people who are not, and we are going to compare those two groups at the end of the study. uBiome has a grant program, a small grant program, where they will allow us to have their kits, and those kits are designed to test the microbiome in people. And so, we have been so excited to partner with them because they will allow us to evaluate the microbiome of the intestine in these individuals who are going through both this exercise training program as well as the kefir intervention, so it will be exciting.

Can you describe kefir?

So, kefir is a fermented milk beverage, and many of us would be like, ‘Ugh!’ when you think of that, but it has actually been around for thousands of years. It has a lot of potential for health promotion in terms of it’s got a lot of microbes that are health promoting as well as that kefiran substance that I was talking about earlier. I like to think of it a super-powered yogurt that sticks. And I like it, or like the idea of using it, because it doesn’t have all of that lactose and we know that milk is a good recovery beverage from exercise, and if cancer survivors were afforded the potential to use milk or a dairy-based beverage if that’s what they prefer with these additional health promoting benefits it might be good for them.

Additionally, a lot of cancer survivors have an altered intestinal microbiome because of the chemotherapies that they are on and treatments that they undergo will alter the balance of those microbes in the intestine, and so, when that balance gets thrown off it can immediately affect your immune system and your overall health. And, so by introducing kefir into the system that idea is to repopulate that gut with more healthy bacteria, health-promoting bacteria, so that they have got a healthier gut, which will then confer a more healthy outcome hopefully in terms of their overall quality of life and their ability to adhere to their exercise-training programs at UNCCRI.

Do you know if this is the first of its kind using kefir on cancer survivors?

I think it’s one of the studies that’s out front with using kefir in a cancer-survivor population. I think there’s definitely been a lot of probiotic-type studies in cancer-survivor populations. This is probably one of the first ones that’s done with kefir used as a recovery beverage in a physically active cancer survivor. So, I know it’s a small population, but I still think we can glean a lot from how these individuals respond and hopefully we will be helping them.

So, you have a control group, and you have a kefir-positive group. Can you describe the number of people in each group, and how long you’re going to be studying them?

Yes, it is 12 weeks in duration. We have 12 people that we are recruiting into the kefir group, and 12 people that we are recruiting into the control group. Those individuals will undergo pre-intervention and post-intervention assessments that are linked to just their overall health and fitness as well as their microbiomes. Because we partnered uBiome, we will be able to collect a fecal sample, before and after the intervention, and they send them away to uBiome, and uBiome will do the analysis for us and give us that information, and then we will work together to see how this intervention affects.

Do you have any addition information, comments or anything I forgot to ask that you want to let everyone know?

I think it is really important to highlight the research team that we have going on here. Obviously, this is Peter’s kind of spearheading this project, but we work a lot with nutrition, we work with all of the staff at UNCCRI. Dr. Hayward who kind of oversees that program, as far as the multidisciplinary nature of some of this work we could not have proceeded without that. In addition, we are actually working with Dr. Nicholas Pullen over in biology, and he is helping us with a lot of our unit measures and kind of at least wading through a lot of those questions that are immune- and inflammatory linked. This is definitely not just us or me, it’s a group effort, and it has been so fun!