For the Love of Video Games: UNC’s eSports Club Growing on Campus

Founded three years ago by UNC senior and Physics major Zach Peters, as competitive gaming was gaining steam nationally, the eSports Club has grown to about 50 students on campus. Another 250 members affiliated with UNC joined on the club’s Discord app, which is used by gamers to chat and text while playing games. 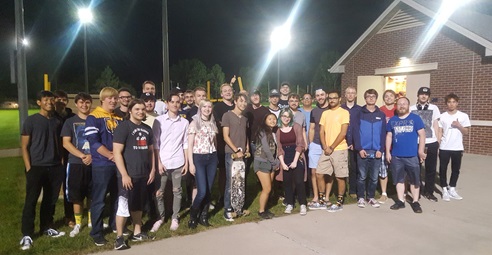 Members of the eSports club at UNC.

The club started as a casual way to bring together gamers on campus to play video games, said current president Alexander Puckett, a senior Computer Information Services major. Now, the club competes at a collegiate level against schools from around the country.

“I love the level of competition that comes with competing in a collegiate league because typically the people that are playing aren’t expecting this to turn into some sort of career,” Puckett said. “They’re doing it competitively, but at the same time, it’s for fun. At the end of the day, we all just like playing video games."

eSports as an Ever-Growing Industry

The eSports industry is growing quickly with an increase in both market revenue and the number of events, players and viewers. According to the 2019 Global eSports Market Report, the eSports global revenue was $655 million in 2017 and increased to almost $865 million last year.

This revenue comes from sponsorships, advertising, betting, prize tools, tournaments, ticket sales and merchandise. According to another set of data in 2017, one of the top leading games with the highest number of players was League of Legends, with a total of about 100 million players.

While the majority of the games are accessible online, the team occasionally travels to a gaming center that has PCs set up to play weekly matches or participate in tournaments. Bella Yang, a sophomore Art History major who manages the club’s social media, and Puckett said they are working to get a dedicated gaming space on campus with computers for the club.

“I’m very optimistic,” Puckett said. “I just hope it happens while I’m still here because eSports is an ever-growing industry, and everyone plays video games now it seems.”

Yang, who has been in the club for two years, said the club gives her a sense of belonging.

“I tried going to a lot of fairs and looked at sororities and other clubs, and none of them really resonated with me like this club did, so for me, it’s a place that I can call home,” she said.

The eSports Club will participate in the first eSports league hosted by the Big Sky Conference, in conjunction with Riot Games and presented by Idaho Central Credit Union, beginning on Saturday, Feb. 1.

The league will focus on one game for the first season: League of Legends, a competitive online game pitting two teams across different battlefields and game modes. The first few weeks of games will be held online typically at 1 p.m. on Saturdays, which will lead up to the quarterfinals beginning on Sunday, March 15.

UNC Assistant Professor Matthew Farber, an expert on game-based learning, added: “There are tons of benefits from eSports, like being part of a team, just like traditional sports. There are also skills around gaming tournaments such as shoutcasting, or broadcasting, on Twitch and YouTube, and other technology around the games themselves. Other positive aspects are mentorships with youth.”

“We have a wonderful program here,” Farber said. “I see a lot of recruitment potential as well, as schools now have scholarships."

The eSports Club meets from 6-10 p.m. every other Friday in the University Center’s Spruce Columbine Suites. The meetings consist of meet-and-greets, “Bring Your Own PC” and out-of-school events, such as bowling. Members compete online weekly, and the club has a team for each of the six games it competes in: League of Legends, Counter-Strike, Rainbow Six Siege, Rocket League, Dota 2 and Apex Legends. Students can try out for multiple games in order to join a competitive team and can be on only one team at a time. Time commitments for eSports teams vary based on regular practices, scrimmages or weekend matches.

Students interested in joining the eSports Club can attend the bimonthly meetings or join on Discord at discord.gg/ bearden.