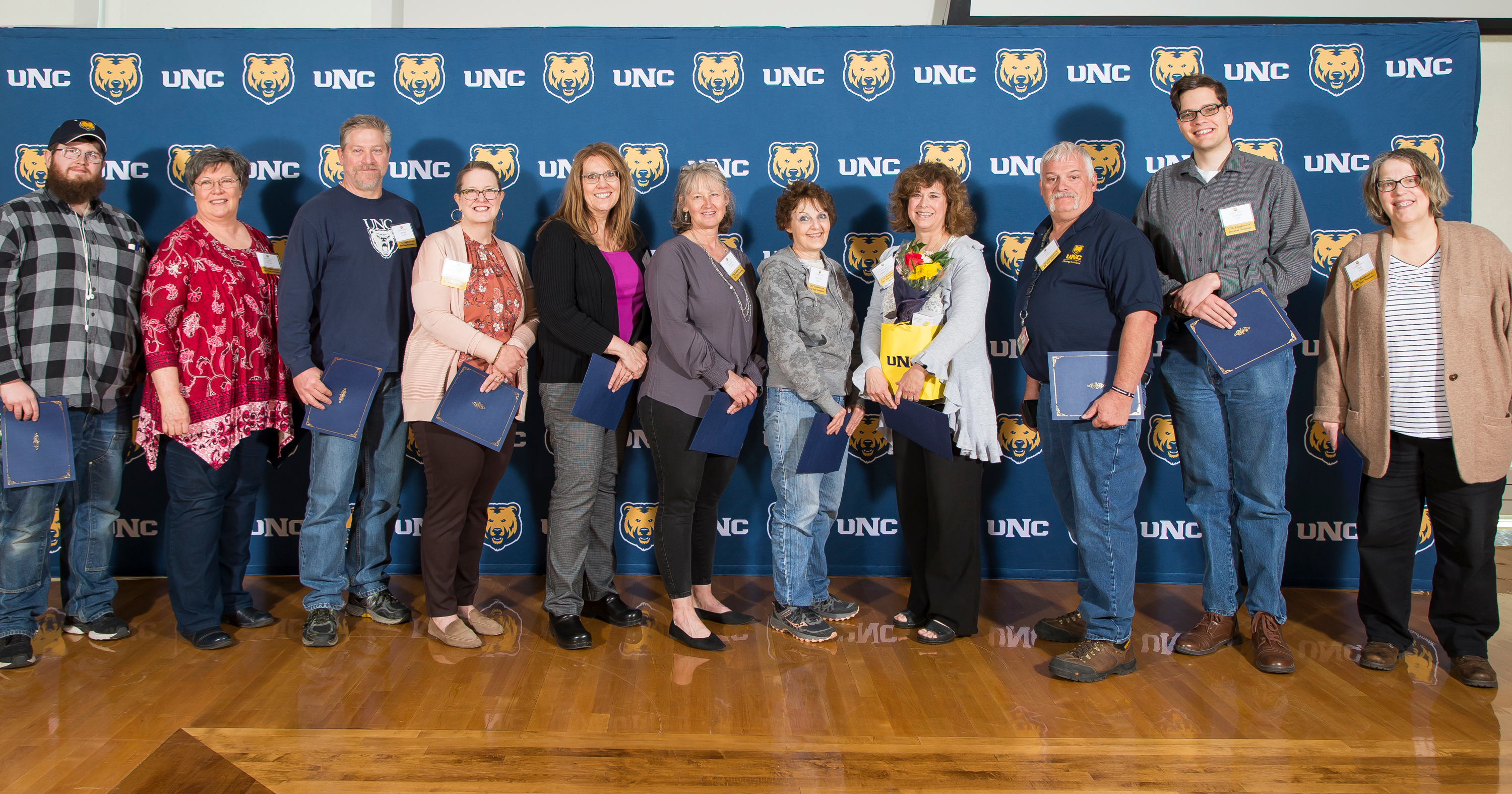 University of Northern Colorado staff were honored during the 50th annual Staff Recognition Luncheon and Awards Ceremony on Wednesday, March 23.

"I am very appreciative of your commitment to UNC and the passion you have shown towards prioritizing student success," Feinstein said. "I know many have shouldered an extra workload at times over the last two years and have had to adapt continuously through the pandemic. I want to thank you from the bottom of my heart for all of the hard work you display on a daily basis."

Secord added, "When we reflect on everything that has taken place these last few years, I confidently believe we work alongside the best colleagues."

A Career 45 Chapters in the Making

When Craig McWhirter attended the University of Northern Colorado in the ‘70s, he was studying industrial arts education gearing up to be a shop teacher. He poured himself into woodworking, metalworking, printing and graphic arts, skills he didn’t necessarily end up using professionally. McWhirter’s career path took a different direction than he planned, then again most don’t plan to take on a job their junior year of college and keep it for the next 45 years. 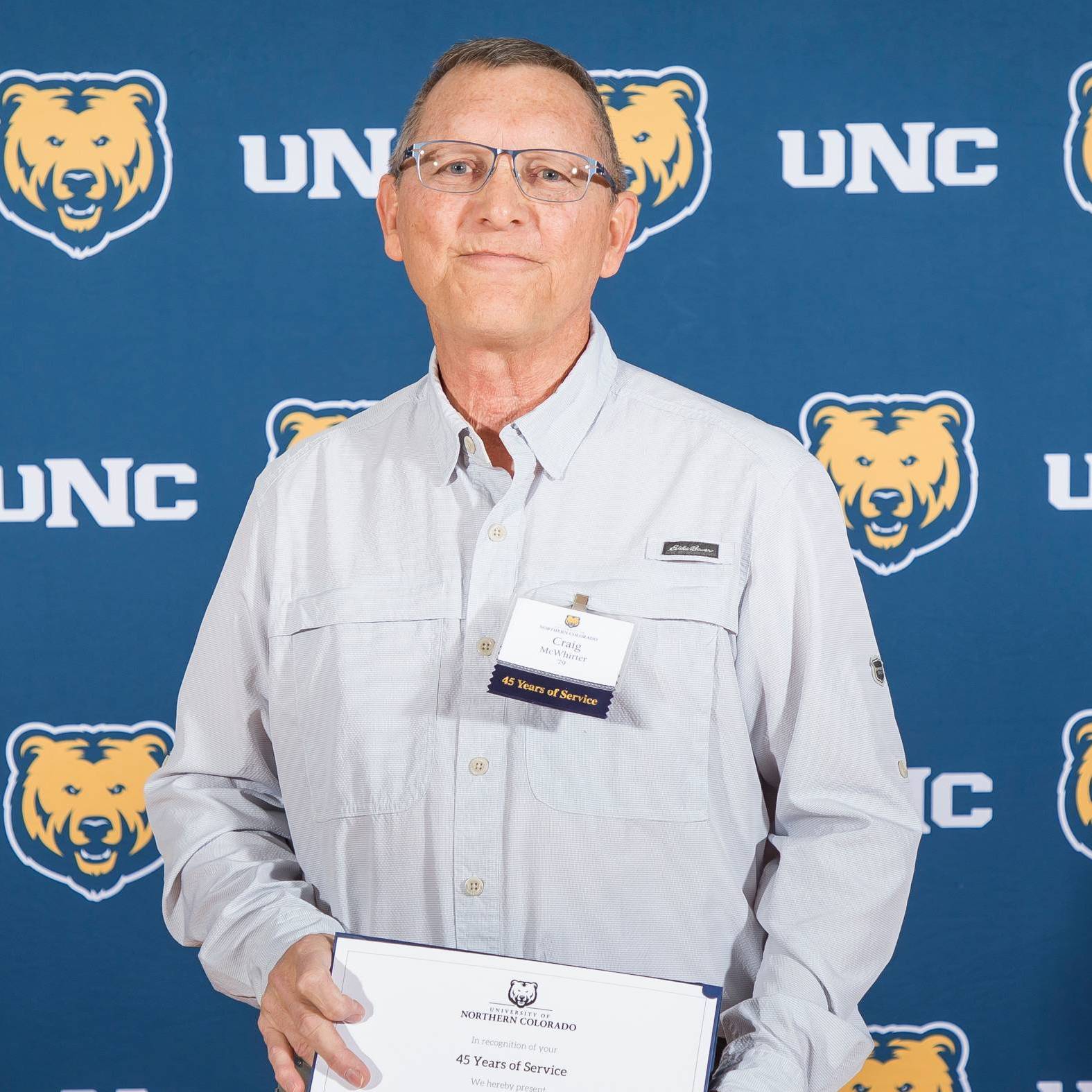 McWhirter began his career in the Reserves Department in 1976 as a part-time student-worker. A year later, he accepted a full-time library assistant position and from then on, he continued to move up the ladder or start a new chapter in various departments until he became an information technology professional. McWhirter even continued working at Michener Library while he was receiving a master’s degree in Computer Information Systems from Denver University.

“The library was always a wonderful place and environment where everyone was valued, everyone worked well together and bonded,” McWhirter said.

McWhirter was subject to a lot of change over the years at UNC. For one, the president of the university when McWhirter started his career was Richard R. Bond. There have been nine presidents hired since.

“I saw several presidents and library deans, but it didn’t matter, the environment was still the same and everyone’s contribution was valued,” McWhirter said.

Some of the biggest changes McWhirter witnessed, though, dealt with technology and the birth of the internet. Back in the ‘70s, a trip to Michener Library consisted of more than just logging on to a computer and researching articles online. Students instead walked up to rows and rows of card catalog cabinets and print indexes, an information desk and a circulation desk. They would use card catalogs and print indexes to locate needed research inside books, microforms and periodicals. It could take students 45 minutes to finally be armed with a load of information they need for an assignment.

McWhirter was there for it all assisting students through this exhaustive process, which is something he loved to do.

“You see students graduate that you helped, and you feel like you made a little bit of a contribution to that. It was always satisfying to help people keep going because my goal was to help them be self-efficient” McWhirter said.

Through the years, McWhirter was instrumental in expanding, deploying and maintaining the ever-changing technology that became vital for accessing library resources. He also devoted nearly five decades to assisting students, supervising student workers and managing the library’s Information Technology Department.

“A library was not a place I planned to stay for a career, but it was a good place to continue my career,” McWhirter said. “That’s where I wanted to be.”

McWhirter officially retired from his UNC libraries career in January 2022, for the second time. He came back to work after he first retired in 2009 as a part-time library technician.

Craig McWhirter (in orange) celebrating his first retirement in 2009

Craig McWhirter (in orange) celebrating his first retirement in 2009

“It was like a family, and it was a hard place to leave because people do not experience that in every work environment,” McWhirter said.

A tough decision for McWhirter and an even tougher one for the libraries staff to see the book on his impactful career turn its final page.

McWhirter was one of the employees recognized during the Staff Recognition Luncheon and Awards Ceremony. He was the only one recognized in the 45 Years of Service category, the longest tenure category. McWhirter’s son, Matthew McWhirter, was also recognized for working at UNC for 10 years. He is currently an academic report writer for the office of Business Intelligence and Data Engineering. And McWhirter’s wife Denice is currently working part-time at UNC. In total, the McWhirter family has worked almost 85 years at UNC.

The event celebrated the milestone Years of Service for staff awardees.

Both classified and professional staff were honored for their contributions to students and the university.