Music to His Ears: Professor Offers Individual Lessons in Park 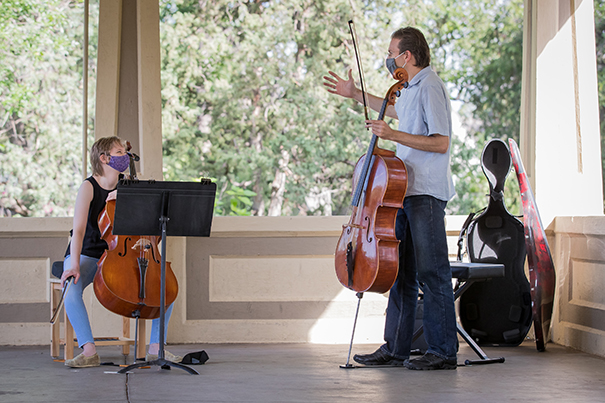 The idea came to Professor Gal Faganel as he attended a family function at Glenmere Park, a few blocks north of UNC’s west campus.

He hadn’t seen his cello students in person since the university moved classes online five months ago. Faganel adapted, and even found advantages in the virtual space (more on that in a moment), but still longed for side-by-side instruction.

In light of the continuing pandemic, it occurred to him that the great outdoors could enable him to offer bonus lessons over the summer for his incoming and continuing students.

So last week, that’s exactly what he did. He arranged for individual hourlong lessons at the pavilion in the park. Students were asked to wear masks, and Faganel provided music stands and chairs kept at a distance as an additional precaution. “There was awareness on both sides. … it was less risky than going to the grocery store,” he said.

Aside from the occasional disruption of a lawn mower, which “is hard to make chamber music with,” the sessions worked as Faganel envisioned.

“The cello lesson at the park was the first time I had performed outdoors for a lesson, and I thought it was a great experience,” said incoming student Jaidan Ursich. “The venue had a different sound than a room would, obviously, as it had mostly open walls and was made of concrete, creating a more unique and open tone from the cello. I would take a lesson in the park again.” 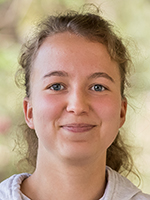 Added doctoral student Kelsey Smith: "For me, the best part of the experience was just getting to play for physical people again! I have performed outside fairly often in the past for events like weddings and parties, but have never had a lesson outdoors. I’d certainly be open to outdoor lessons as long as the weather stays nice."

Faganel is preparing to return to remote lessons in the fall when practicing outdoors is less reliable. He learned to optimize those sessions, in part by upgrading some equipment and fine-tuning the software settings that allow for original sound to transmit through speakers or headphones unfiltered. While finishing last semester online, in order to reliably hear more nuance in their performance, he found benefits in requiring students to send him a recording of their playing in advance of the weekly synchronous remote lesson. This in turn raised students’ awareness of their performance.

While playing, there’s limited perception of what they’re doing because they’re in the middle of doing it,” he said. “It’s hard to put yourself in an observer’s role as you’re playing. They learned a lot watching their own recordings before they sent them to me. It was another layer of improvement.”

Smith, the doctoral student, agreed: "Even though it's not ideal, I feel like I have learned a lot both as a student and as a teacher from this whole experience of virtual lessons. I have recorded myself a lot more than I had in the past, which helps me to teach myself in a way. I have also had to think much more creatively about how I teach my own students in a virtual setting."

It’s been so successful, that Faganel is toying with idea of incorporating some of the newfound hybrid teaching strategies into his regular curriculum once the pandemic ends. Regardless of the modality, Faganel strives for high-quality personalized instruction and creating a sense of family among his students.

“There’s this can-do attitude about this that we’re here for students and have a deep responsibility for that,” he said. “That’s what my mentors did for me.”

Faganel is no stranger to performing outdoors. He’s hauled his cello to the summits of Colorado 14ers, including Longs Peak in 2013, where he and a friend recorded this video of the climb and the performance on the peak included in his recap of the trip.