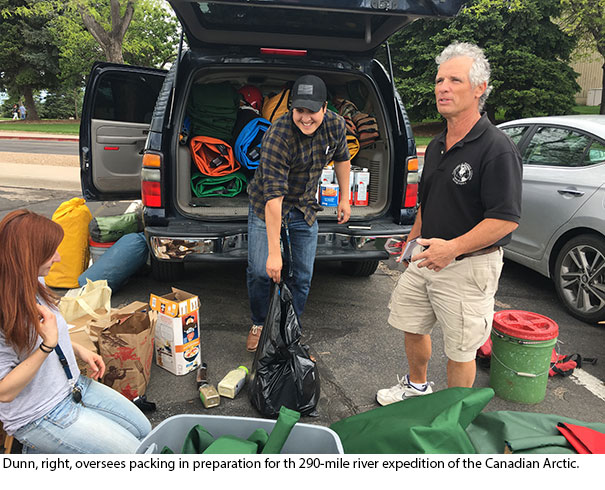 May 23, 2017 — University of Northern Colorado Professor Jimmy Dunn is leading a group that includes students on a 290-mile river expedition of the Canadian Arctic.

They will conduct research to gauge how far north spruce trees are growing since Dunn's first visit to the area 40 years ago. When finished, Dunn says the project will become part of the literature that assesses whether temperatures in the north are increasing.

The eight-member team will spend 21 days collecting seeds and marking the locations where they collect them. Upon their return, they'll analyze the collected seeds in the lab and run tests to determine if they're capable of sprouting.

The group will paddle in inflatable canoes every day, camp each night in remote wilderness, and cook their own food, which they will have to ration throughout the trip.

On Thursday, Dunn and the team packed their vehicle, a GMC Yukon, with equipment, including eight, 40-pound, heavy-duty kayaks, and supplies, many of which they made, to ensure that they will fit. They have to pay attention to weight, too, because they have to get to their starting point on the Coppermine River by departing June 12 on a floatplane from Yellowknife in Canada's Northwest Territories. The aircraft has a limit of 2,100 pounds.

The expedition, which took two years to plan, will begin at the Coppermine River from Rocknest Lake and end at the mouth of the river at Coronation Gulf in the Canadian Northwest Territories and Nunavut Territory.

Support from UNC's Hewit Institute and a $5,500 anonymous gift made through the UNC Foundation helped fund the expedition in its entirety. Students will share their experiences during presentations at Colorado high schools this fall.