Setting the Stage for Student Success 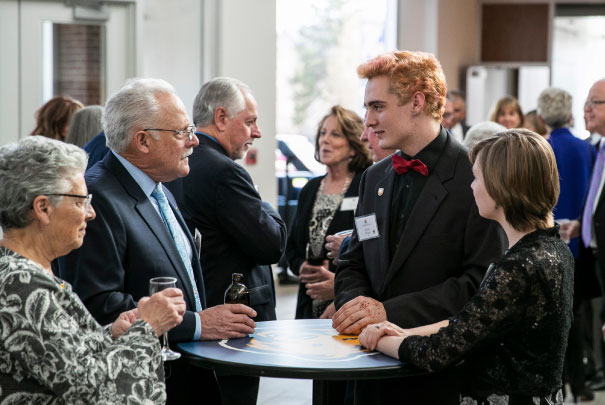 Ever since Louis Morales first set foot in 7th grade orchestra, he’s been smitten with music.

“I never had any experience with music before that; I’ve been in orchestra ever since then. My love for music has only grown since that day,” Louis says.

Like many students, Louis came to UNC for the elite music program, and it hasn’t disappointed. With a little help and guidance from what he calls his “Frasier Family,” one day he hopes to play upright bass with a professional symphony or philharmonic.

“Being able to perform, being able to write about music, so musicology, I would love to do all that together,” Louis says.

But as a sophomore, that’s still a few years away. For now, he’s enjoying the brand-new addition to campus that’s elevating everyone’s work – the Campus Commons Performance Hall.

Louis got his first taste of the space during the Campaign for UNC Celebration last spring.

“It was amazing sitting and listening to a variety of performances in there,” Louis recalls. “Just the projection, it sounded like the performers were right there in front of you. It was very exciting to know that I would also be performing here in this hall; that I’m going to be able to project like that. Just thinking about the possibilities - I was like a kid in a candy store.”

And just a few short months later, it was finally his turn to take the stage.

“My first performance in the space was called, Hear the Hall. It was our first curricular performance to be held in the performance hall,” Louis says. “We performed a number of pieces to demonstrate the capabilities of the Performance Hall, from very quiet pieces to really abrupt and loud, just everywhere across that spectrum of music. Acoustically, it sounds incredible.”

Louis also says the space is the perfect size for student performances and in the ideal location.

It’s a special space where Louis can hone his craft. A space where he feels at home. A space that envelopes him in sound and allows him to take his work to another level.

“It really does make the biggest impact. It means the world to us. It surprises me all the time, in a good way, the generosity that other people have. When they come together it can create things like this.”