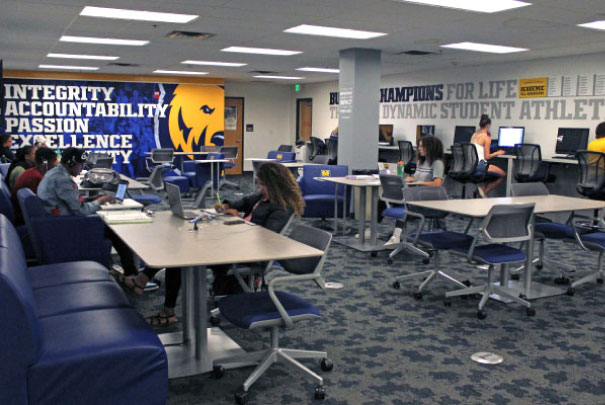 This Academic Excellence week, UNC student-athletes are grateful for a special space on campus where they can connect, study and receive customized support services: The Bob Heiny Student-Athlete Academic Success Center.

“I get at least eight hours’ worth of study hall a week and it’s made a huge difference. It’s quiet here most of the time and you can actually get stuff done. You don’t have the distraction,” says First-Year Track athlete Emily Wilson.

"You know before, I feel like it was a lot more closed off in sections. There were round tables where students would just interact exclusively with their own teams. I feel like it’s much more open now and there’s a lot more interaction with other people. I think even when you’re studying it’s good to interact with other teams, because I see my teammates probably 40 hours a week," says football player Justice Littrell.

Bob Heiny excelled as a University of Northern Colorado faculty member and administrator for 48 years. A generous donor and avid fan of the Bears, Heiny served with UNC Athletics and the NCAA for 28 years in a number of capacities, including Faculty Athletic Representative and Interim Athletic Director.

The impact of Heiny’s unwavering passion for academic excellence can still be felt across campus and now will never be forgotten, thanks to the Bob and Bonnie Phelps Family CAP Trust.

New computers, furnishings and visual enhancements were made to the space along with a renewed commitment to providing financial education and academic support to student-athletes.

"I have questions about grad school and what I need to do, so I've been using it a lot more. I go up there to ask advisors Jimmy Henderson and James Zapp questions all the time. I probably go in there at least once a week. I think it’s given me an extra bonus," Littrell says. "You know, most students have to make an appointment with their academic advisors, whereas I can just go up to the Academic Success Center and see if Jimmy or James are in the office, pop in and ask them a question. I definitely feel like it’s given me an advantage."

Since the academic success center was refreshed, more than 50 student-athletes have earned academic recognition from the Big Sky Conference, 38 of whom had a GPA of 3.5 or better.

The Campaign for UNC

Donor support through the Campaign for UNC has made countless opportunities and spaces like the Bob Heiny Student Academic Success Center possible for current and future students.

To learn more about the wide spread impact of philanthropy through the University's first ever comprehensive campaign, visit www.unco.edu/give.