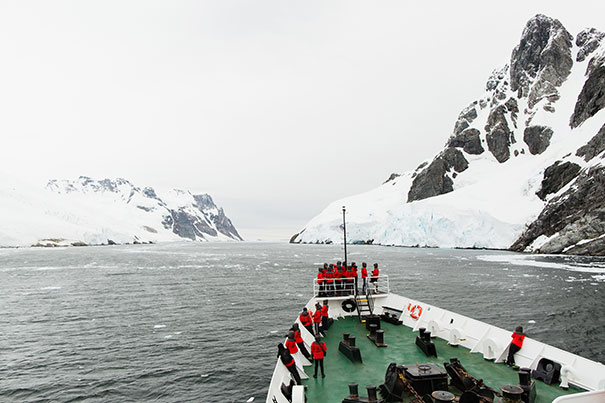 Meteorology Professor Cindy Shellito, Ph.D., has been selected to join an international group of 80 female scientists on a three-week expedition to the Antarctic Peninsula.

The expedition, departing from Ushuaia, Argentina, Dec. 31, is part of a global initiative called Homeward Bound. The project aims to elevate the status of women in science and empower them to take a leadership role in issues related to climate change and sustainability. To support the cost of the trip, Shellito has been awarded a grant through UNC’s Research, Dissemination & Faculty Development Program.

Above: The Homeward Bound 2018 voyage last February. Shellito is among the third group to take the Antarctic Peninsula expedition.
Photo by Oli Sansom

Shellito said she applied for the initiative because she is drawn to interdisciplinary collaborations and is committed to finding new, more effective ways of teaching and sharing science, especially the science of climate change. She is working with others in the group representing 18 countries to develop new research ideas and curriculum projects related to climate change. 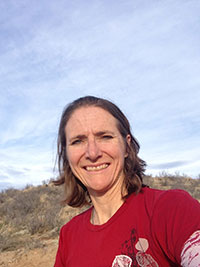 “I want to better prepare students at UNC for life in the 21st century, which will involve making some tough decisions about how to respond to climate change,” she said, adding that UNC is poised to be a leader in environmental education. She hopes to use her professional development in this program, particularly that related to improving visibility and outreach, to better promote the types of programs and opportunities at UNC.

Antarctica, itself, was also a draw to the program.

“I was also attracted to the opportunity to visit a place where so few people visit and stretch myself to find ways to share that journey with others,” she said. She is collaborating with other women on the project to develop a virtual Antarctic fieldtrip for UNC students. Curricular materials will be publicly disseminated once they have been tested in the classroom. She’ll be sharing her experiences in the Homeward Bound professional development program and on the Antarctic expedition on the Earth and Atmospheric Sciences Department blog and other social media.

Shellito has studied climate change for nearly 25 years. Much of her work has focused on using computer models of climate to try to reconstruct what the climate of Earth was like 50 million years ago, when Earth was much warmer than it is today. During that time, the Earth was so warm, in fact, that Antarctica was covered by large swaths of forest. She also studies weather and climate change in the Andes of southern Ecuador, where she spent her sabbatical in 2015 after receiving a Fulbright award.

“Warming is not a new thing for the earth,” she said, “But it is new for us. We evolved, and our civilizations evolved, in some of the coolest climates of the past 65 million years. And now, our activities are warming the Earth at a rate that is much faster than anything we’ve seen in the geologic record.”

More About the Expedition
This will be the third expedition of this type that aims to develop a global network of women to collaborate on research and action on climate and environmental change. The expedition is a culmination of a year-long professional development program with strategic aims that center on bringing more women in STEMM (Science, Technology, Engineering, Math and Medicine) to the leadership table in the mitigation and adaptation to environmental change. The first expedition sailed in December 2016 and the second in February 2018. Over 10 years, Homeward Bound aims to include 1,000 women in the program. Antarctica serves as the natural backdrop for collaborative work on climate change because it represents the relative fragility of the natural world and is highly sensitive to changes in global temperature.