Adding Color to the Greeley Stampede

The Greeley Stampede, which started in 1922, has always brought color and energy to the local community, so it’s fitting that as it celebrates 100 years, it does so with even more color greeting spectators. The annual event – which runs from June 23 to July 4 this year – includes rodeos, concerts, a demolition derby, carnival and an art show. Stampede General Manager and UNC alumnus Justin Watada ’02 says the Stampede staff started talking about anniversary plans before the pandemic, then put those discussions on pause.

As they neared 2022 and the pandemic receded, Stampede management began to make plans again.

“Our marketing coordinator, Kevin McFarling, was thinking of ideas to add color and make entering the arena more visually appealing. The idea came up to add artwork, so we reached out the City of Greeley about partnering on the project.”

They wanted to work with local artists for the project, and chose UNC alumni Armando Silva ’10 and Cody Kuehl ’05 – both highly successful artists with distinct styles.

“We’ve worked with both of them in the past. They both created live art at the Big Buckle Ball event to raise money for our Foundation,” Watada says, adding that they didn’t impose a lot of criteria for the murals. “We wanted a western flair, but we really gave them freedom to be creative. They both provided a sample of their idea and the group (including the Greeley Arts Commission) quickly approved.”

Watada says that art is a natural fit with the Stampede.

“This is the 22nd year of our western art show, and art has always been a part of Stampede. It’s a fundraiser for our foundation and proceeds go to support scholarships in Weld County. And a lot of people only get to see western art in person once a year, so it’s always been important for us to showcase that artwork.”

He says that the murals will continue giving people access to art beyond the Stampede, with all the events – from the county fair to motocross – that take place in the arena. 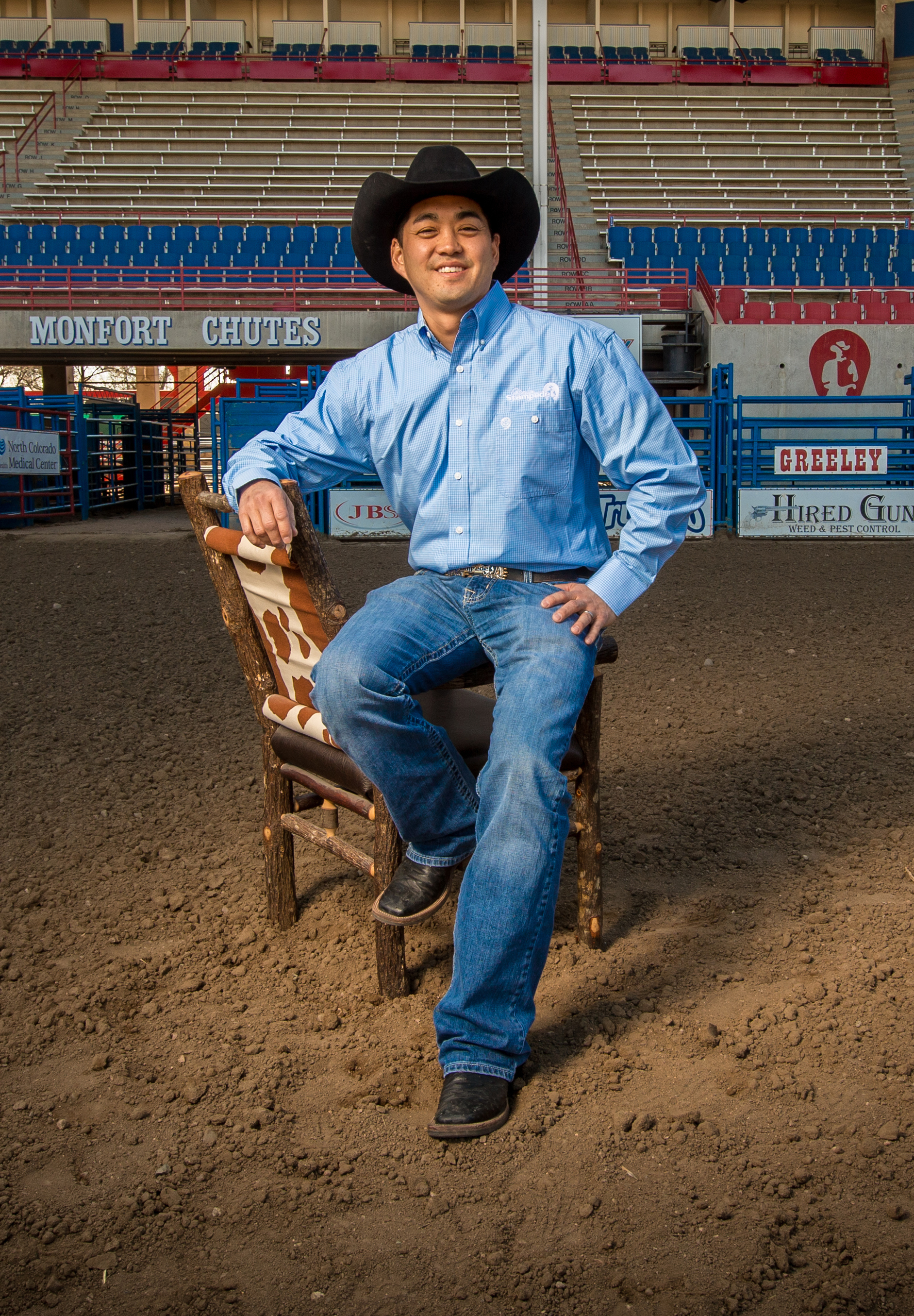 Not long after earning his bachelor’s in Business Administration from UNC, Watada started work at the Stampede as Director of Sales in 2002.

“At that time, I had just graduated from UNC and was working at Old Chicago (who was a major Stampede event sponsor). I had just finished a shift at Old Chicago and ran into the then Stampede CEO Lynn Settje, who encouraged me to interview for the job opening at the Stampede,” Watada said.

It wasn’t something he had imagined while he was at UNC.

“I had no (rodeo) experience besides working at the food booths that Old Chicago operated during the Stampede. At that time, I didn’t listen to country music or go to any rodeos. I never thought this Japanese kid would ever be running one of the biggest rodeos in the country for sure,” he said.

Watada, who grew up in Fort Lupton, says he initially chose UNC because he had family already attending. And, coming from a small school with only 114 students, moving to Greeley was a move to a bigger area.

“I’ve now lived in Greeley for 25 years and still run into people that I had classes with at UNC,” he says. “That’s still one of the best aspects of Greeley – it still has that small town feel even though it's now over 110,000 people.”

And while he may not have envisioned 20 years with the Stampede, his degree has proven a perfect fit with his career. “When I first came to UNC, I started as a Psychology major and then moved around and finally got over to the Business School. All in all, business management actually ended up being perfect for what I'm doing now.”

He’s gained an understanding for rodeo and an appreciation for the volunteers and contractors who keep the event running smoothly, and says he enjoys helping those who attend have a great experience at a legendary event.

“We want to provide entertainment that will create fun memories for our community every summer,” he said.

One of those long-running fun memories for the community is the Stampede’s Independence Day Parade, hosted this year by UNC. The parade travels through campus along 10th Street. This year’s parade boasts more than 100 entries, led by the always popular longhorn cattle.

“It’s a big community tradition where people come and stake out their spot to view the parade, so we’re anticipating large numbers,” he said. Watada also said that the Stampede partners with UNC athletics, with coaches and athletes volunteering and participating.

“(The 100th Anniversary) is more than a celebration just for than the Greeley Stampede, it's for the city of Greeley, for Weld County and the state.  We just want to make sure that everyone's able to enjoy the big milestone.”

For more information or for tickets, visit the Greeley Stampede website. The Independence Day Parade starts at 9 a.m. on July 4.