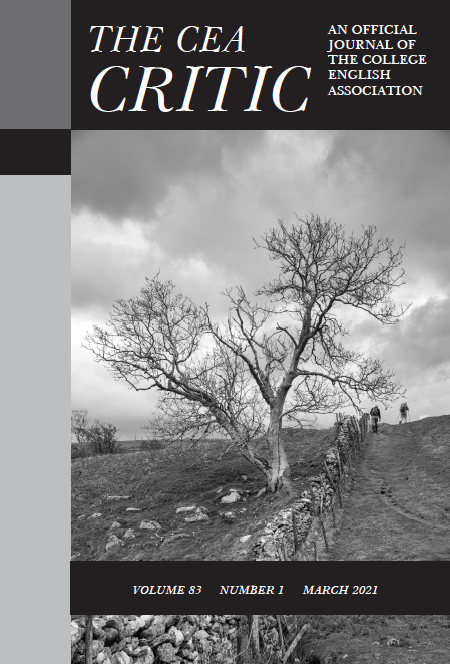 About The CEA Critic

The CEA Critic is the is the flagship journal of the College English Association (CEA). It is one of the United States’ oldest continuously published journals in the fields of literary studies and rhetoric/composition. In 2018, it celebrated 80 years in print.

In 1972, former CEA President Earle Labor described how the organization was founded in 1938 "by a group of young radicals in the Modern Language Association who felt that the research-oriented MLA was slighting the concerns of teaching." More than eight decades later, the CEA continues to embrace the teacher-scholar model. So does The CEA Critic.

The CEA Critic began as "the Newsletter of the College English Association." In 1948, with Volume 10, the newsletter was replaced by a full-fledged scholarly journal, The CEA Critic. The journal continues the goal of its founders, bridging traditional academic scholarship with practical pedagogy. The CEA Critic publishes scholarly articles that center on close readings of texts—fiction, poetry, drama, nonfiction, and film—that English professors study and teach. In this way, we celebrate the importance of literary criticism from a variety of approaches and value the reading and teaching familiar and unfamiliar literary works. We also publish articles that consider pedagogy from a theoretical perspective or engage issues pertinent to all aspects of rhetoric and composition. As such, The CEA Critic embraces welcomes teachers, students, and scholars with a broad range of interests gathered traditionally under English studies and provides a refreshingly sharp academic and practical perspective for teachers and scholars alike.

Since 2012 the journal has been housed at the University of Northern Colorado and published by the prestigious Johns Hopkins University Press.

To learn more about the College English Association, the organization’s annual conference, and to become a member, please visit the CEA website.