Congratulations UNC graduates! All the achievements and important decisions you have made over the past few years have led to this day. A college degree is a special thing, so let’s make this day one to remember!

Each college will hosted a virtual ceremony for undergraduate and graduate students on Saturday, December 12.

Need accommodations? If there may be barriers to accessing any virtual commencement events and need request disability accommodations contact the Disability Resource Center with any questions you may have by phone 970-351-2289 or email at DRC@unco.edu.

Schedule a virtual meeting for 10-15 minutes before your ceremony live stream begins. Send out the meeting link to the friends and family you’d like to watch with. You can use:

In your browser, open your Virtual Commencement Ceremony live stream found here. Share your screen with your guests so that they can see the ceremony too. Enjoy your ceremony in the company of loved ones!

After the ceremony, attend your college’s virtual reception. Friends and family of all Bears are welcome! Remind your guests to check their email for an invitation containing the reception link. When you RSVP, be sure to list the names and email addresses of your guests. A link to the virtual reception will be sent to each of them.

End your watch party call after thee ceremony and join your virtual reception to introduce your loved ones to your faculty members. 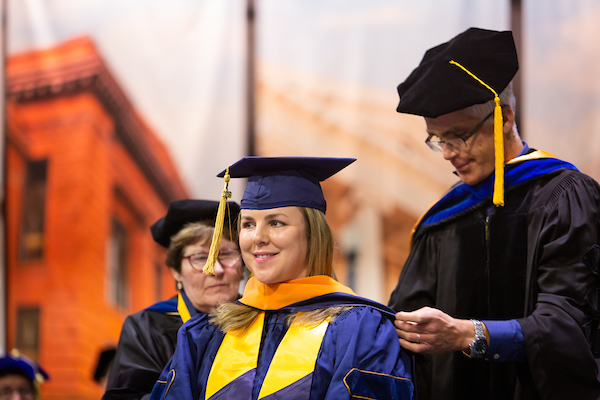 The Graduate School hosted hooding ceremonies for doctoral candidates and invited faculty advisors and committee members to attend. Family and friends were also invited to join.

Katherine Archuleta began her career as a schoolteacher in Denver Public Schools and worked in local government for Denver Mayors Federico Peña and John Hickenlooper. She worked for the Departments of Transportation and Energy in the Clinton administration and was Chief of Staff to Labor Secretary Hilda Solis during the first two years of the Obama Administration. Katherine joined the Obama 2012 campaign as its National Political Director. Archuleta was appointed by President Barack Obama to be the first Latina to lead the US Office of Personnel Management. Overseeing the Human Resources management of the entire federal government, Ms. Archuleta was responsible for the recruitment, hiring, development and support of federal workers throughout the country. She designed and developed the Federal government’s Diversity and Inclusion Strategic Plan in collaboration with the White House and all Departments – working closely with her own staff and government leaders to design steps to increase the recruitment and hiring of women, racial and ethnic minorities and millennials for federal service. She is a founding mother of Mi Casa Resource Center, The Latina Initiative and The Women’s Foundation of Colorado and I’m Latina and I Vote/Latina Initiative 2020. As a non-profit founder, she is very familiar with the importance of providing voice at every level of an organization, doing so with both an eye on the mission and a respect for every participant, so that outcomes reflect consensus for paths forward.

Katherine currently sits on the boards of the University of Denver Board of Trustees, the Denver Urban Renewal Authority, Conservation Colorado, and the Latino Leadership Institute. She was recently selected as a 2020 inductee into the Colorado Women’s Hall of Fame.

Doctor of Audiology
Degree in Audiology

Laura Schauer lived in Colorado for over twenty years and grew up in Golden, CO. She attended her undergraduate at Colorado State University studying Human Development and Family Studies. After working with at risk youth in Greeley post-undergrad, she then changed her career path to audiology. She was fortunate to be accepted at her first choice in school for her doctorate degree, the University of Northern Colorado. Laura has a passion for improving the quality of life of those with hearing loss and for spreading awareness about audiology. Her passion stems from her personal experiences as an individual with hearing loss. She moved to California in June 2020, accepting an audiologist position near Los Angeles.

Yessica Elena Rodriguez will be graduating with a bachelor’s degree in Biological Sciences with a Pre-Health emphasis and minors in both Sociology and Chemistry. Her hometown drew her to attend the University of Northern Colorado and she has appreciated that direction for the past four and a half years. She has been involved with numerous academic, cultural and social organizations on campus and has expanded within her leadership roles to create a home at UNC. As a proud daughter of immigrants, Yessica has learned what it is like to create a new home and cherishes how UNC has set a foundation for her to create new homes as she pursues her higher education. She plans to apply to medical school and become a pediatric pulmonologist, creating a home in healthcare where she can help and contribute to others finding their own homes. 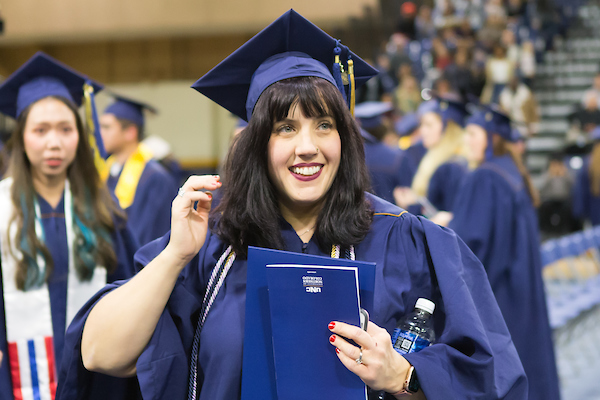 Walk in a Future Ceremony

We know how special it is to cross the commencement stage. We invite you to come back to campus to walk in a future ceremony when it is safe to gather in person. Let the Alumni Association know you’d like walk by filling out this interest form, and they’ll coordinate the details with the Commencement planning committee.