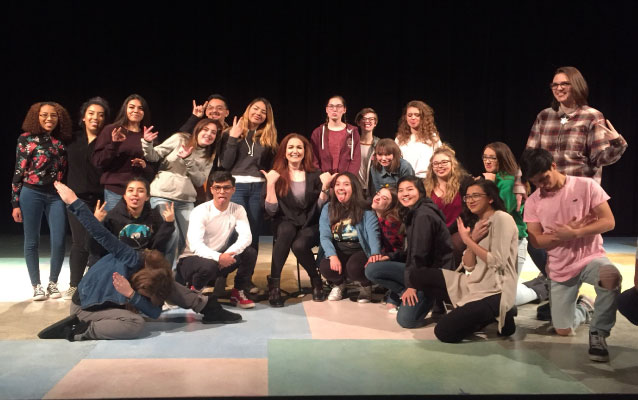 Alumna Cashelle Butler '14 with the Denver Center for the Performing Arts Teen Company.

Saturdays in the Robert and Judi Newman Education Building in Denver, you’ll find a group of Colorado high school students exploring the craft of acting under the direction of UNC alumnus Andre Rodriguez ’09, ’13.

“Our tag line is ‘Using theatre as a vital force in the lives of students,’” says Rodriguez.

Rodriguez is a teaching artist and Shakespeare Coordinator for the Denver Center for the Performing Arts, a role that includes directing DCPA’s Teen Company. He spends his Saturdays with teens from several Denver Metro-area high schools as they explore and build their skills through musical theatre.

Rodriguez credits his own skills development to the start he gained as a student in UNC’s College of Performing and Visual Arts.

“I chose UNC for the quality of its theatre education program,” shares Rodriguez. It’s a quality that helped launch this two-time UNC alumnus and Bobby G Award winner into a career sharing a love of theatre with Colorado’s high school students.

“Whether you want to be a professional actor or not, there are transferrable skills like public speaking and composure under pressure.”

Taking questions from students, Butler walked through her career and college selection story, touching on her choice to attend UNC, performing in the national tour of MAMMA MIA!, and recently earning her equity card in DCPA production First Date.

“Half of this business is networking and marketing yourself,” said Butler. “So it’s important that you go to a well-rounded program, the more well-rounded the better. I got into UNC and it was the best!”

As a UNC student, Butler performed in on campus and Little Theatre of the Rockies productions and participated in the annual New York Showcase. While she met with agents, she chose to manage her own career after graduation; moving to New York and putting in the hard work of casting calls and self-promotion.

Butler earned her big break when she joined the national tour of MAMMA MIA!.

“I started as an understudy for all three moms,” speaking of MAMMA MIA!, “But along the way some people quit and it was my moment.”

She assumed the role of Tanya and toured around the country with the MAMMA MIA! Farewell Tour from 2016 to 2017.

After sharing insight on travel, self-care and self-confidence, Butler closed the conversation responding to Rodriguez’s request for a final bit of advice.

“Make sure that you’re nice. The industry is so small, so represent yourself kindly and well.”

Butler brought her advice and experience full circle by sharing tips to aid the Teen Company students in their group rendition of a song from Hamilton. 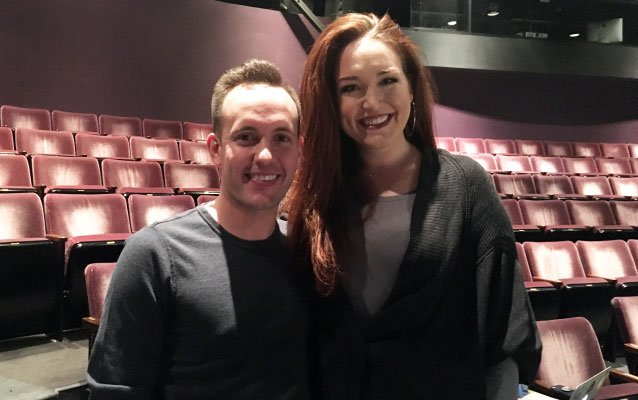 Thank you to the Denver Center for the Performing Arts education and communications staff, and UNC alumni Andre Rodriguez '09, '13 (above left) and Cashelle Butler '14 (above right) for opening their class and experience to the UNC Alumni Association. We appreciate the shared commitment to excellence in education and the arts.