Topping Off a Year of Growth and Change

Topping Off a Year of Growth and Change 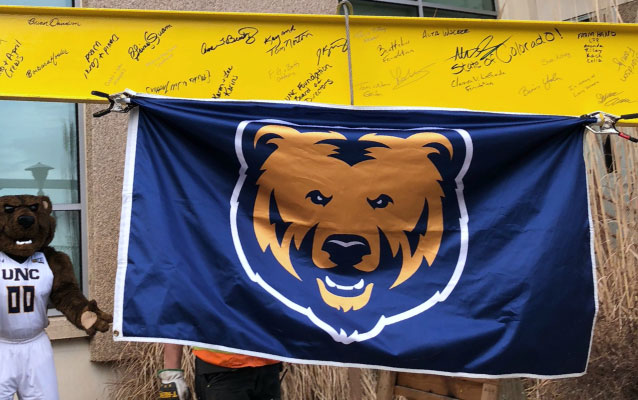 The University of Northern Colorado topped off a monumental year of building and growth during last month’s Campus Commons beam raising.

“2017 began with an active Campus Commons construction site and we haven’t looked back since,” says Allie Steg Haskett ’03, Vice President for Development and Alumni Relations. “Raising a steel beam with members of our university community was symbolic of how far we came during the past twelve months.”

“We set ambitious goals for our university and the campaign encourages our donor and alumni community to be integral team members in achieving these goals. I’m pleased to share that our community is rising to the occasion and choosing to invest in building a stronger UNC.”

According to Steg Haskett, 2017 year closed with nearly $42 million recorded or committed in support of the campaign.  Additionally, the university engaged 7,880 alumni as donors and volunteers since the campaign began; 3,210 of whom attended an event last year.

External momentum and engagement is important for UNC as it recruits a new leader to follow president Kay Norton who will retire at the end of the school year.  Norton announced her intentions to retire during the September State of the University address, concluding a tenure of 16 years as president.

Shortly after Norton’s announcement, alumni and donors offered their input into the search for UNC’s next leader during the Presidential Search Telephone Town Hall, small focus groups, and a university-wide survey. The university retained executive search firm Storbeck/Pimentel & Associates to aid in the recruitment and selection of the next president, a process that is currently underway.

“Looking forward to 2018, I am confident that UNC will have another strong year,” says Steg Haskett. “I know that we will attract an outstanding leader to follow President Norton, in large part because our alumni and donors ensure that UNC remains a top choice institution – whether we are recruiting a prospective student or a president.”

Find out how you can support the university when you get involved in the Campaign for UNC.