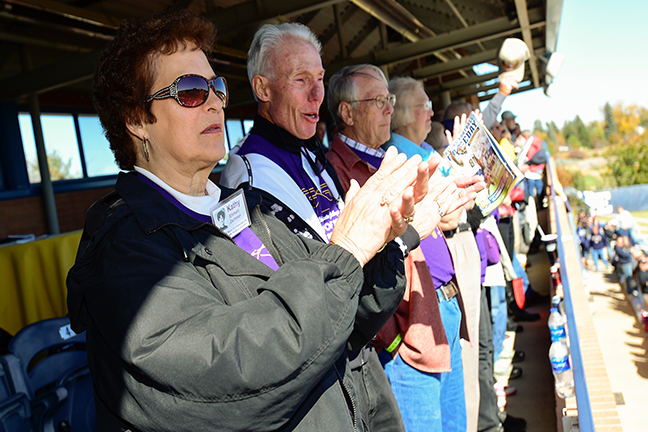 “Gunter is still there. The Garden Theatre and Frasier Hall—and the trees.” But other than that? “It was very different. There are new dorms, and the faculty apartments aren’t faculty apartments anymore,” Kathy (Ehrhart) Zachman ’67, ’69 reflects on seeing campus 50 years after graduating from Colorado State College.

Like many Bear couples, Kathy and her husband Bob Zachman ’67, ’68 met as students. When they received the invitation to the 1967 reunion, neither knew the other alumni who would be attending. They didn’t let that stop them.

“We thought ‘we need to do this. You only celebrate your 50th anniversary once,’” Bob says.

Other Bears returning to campus after 50 years had similar motivations for coming back, including Sue (Pelton) Heuer ’67 and Jennifer (Anderson) Johnson ’67.

“Jen and I had a great experience going to school. That’s where we met, and we thought it would be a great opportunity to get together and do something special.”

Heuer and Johnson met when they were roommates at CSC, and since graduation they have gotten together every year. One year lunch in an airport was their only meeting, and another year they drove an RV up the Atlantic coast together. Their 50-year reunion provided the perfect opportunity for 2017.

“We were roommates in college, then we were roommates our first year of teaching in Baltimore County, Maryland. We became good friends and it was important to us to come back,” Heuer says.

After learning more about how the University of Northern Colorado has evolved from Colorado State College, the general consensus is that UNC has remained true to its roots.

“The academic emphasis is still true, although there are so many more majors now,” Heuer says.

The highlights of the reunion varied for each alum. Bob Zachman thought the campus tour was informative, Kathy Zachman thought the dinner and pinning ceremony was especially nice, and Heuer appreciated the time to visit with other alumni and current students.

Through every comment runs one common theme. Reunion attendees frequently point out how special they feel returning to campus after 50 years.

The Zachman’s advice for future reunion classes? “Go!” says Bob. Kathy adds “Even if you don’t know anybody, you’ll meet lots of interesting people. It was a neat experience. We really enjoyed it.”

Update since publishing: Heuer and Johnson are at it again! These Bears just happened to be together in Connecticut when this story came out.

Homecoming isn't just for Bears who graduated 50 years ago. Return to campus October 5-6 to see for yourself what has changed.