Associate Professor Britney Kyle and her students find clues to the past in skeletal remains. 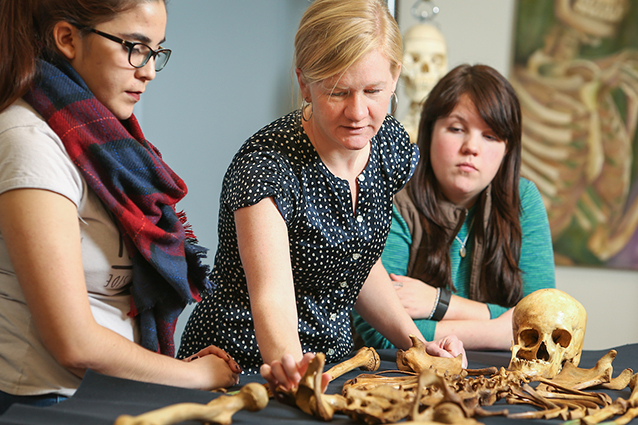 A biological anthropologist and associate professor of Anthropology at UNC, Britney Kyle, Ph.D., works with her students to discover how humans evolved, lived, suffered or succeeded nearly 3,000 years ago.

"We study human skeletons from an archaeological context and look at the impacts of colonization in the Mediterranean," Kyle explains.

She co-directs the Bioarchaeology of Mediterranean Colonies Project with Laura Reitsema, Ph.D., an assistant professor at the University of Georgia. Their project includes research at seven colonies and two mother-cities on the Mediterranean and Black Seas. It is currently a National Science Foundation (NSF) funded Research Experience for Undergraduates (REU) site.

With NSF Funding, Kyle spends eight weeks each summer with about eight undergraduates from across the country. In Italy, students examine bones from 12,000 skeletons that are thousands of years old, learn research skills and begin to build the foundation for their own research projects.

Researchers use isotope analysis, a chemical process that looks at elements in excavated bones, and DNA testing to determine an individual's nutrition (malnutrition), health (disease), and geography (migration patterns).

Kyle and her students can correlate what they've learned with historical documents and social histories and can determine migration patterns using isotope analysis to determine where someone grew up, versus where  they died. They've begun using DNA tests as well.

The populations Kyle has studied lived nearly 3,000 years ago, including colonies in Sicily, Greece and an area called Apollonia in Albania. "In Albania, I found that at the colony (which was made up of local Illyrians, with a small amount of Greeks), the local population's health definitely declined during colonization."

That information helps Kyle explore the regional origins of ethnic inequality, evolution, human adaptation and the impact of social, cultural and environmental disruption on populations.