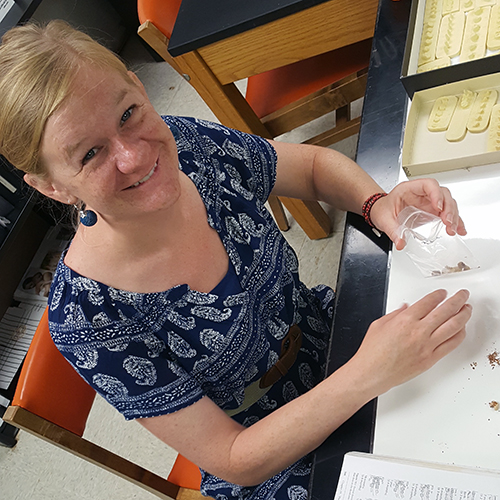 My classroom is an interactive environment, and I use a variety of teaching methods in order to accommodate diverse learning styles. I have two main learning goals: (1) students will be able to articulate the importance of anthropology as a discipline. Specifically, I want them to come away with an understanding of evolutionary theory and an appreciation of how human flexibility allows us to interact in a variety of environments; and (2) students will understand the ways anthropologists collect data and critically evaluate evidence to test hypotheses. In order to convey these overarching concepts, I must be flexible in order to adapt to various classroom environments. To accommodate student diversity within my classroom, including non-majors, international and minority students, I use a variety of class activities to produce a rich and varied learning environment.

I also bring my own research experience into my classroom in order to give students an understanding of how scientists conduct research. For example, when covering paleopathology I summarize my own research on human health and explain how I use bioarchaeology to answer questions about the lives of ancient peoples. I then give students a specific transition in history that has been investigated using bioarchaeology, e.g. humans develop agriculture. I ask them to hypothesize what they would expect to see in terms of changing health following this transition. They also must write out the types of paleopathological evidence they would need in order to support or refute their hypothesis. I then tell them what real bioarchaeologists have found. They use this real bioarchaeological evidence to either support or refute their hypothesis. Students tell me that this exercise helps them understand how scientists use hypothesis testing to investigate questions about the past. By integrating my own research into the classroom, my students appreciate the real-world applications of the materials I teach.

Additionally, I encourage students to learn by doing their own research. Many of my students have become anthropology majors and some engage in undergraduate research under my mentorship. Students interested in working with me on their own research projects should come see me during my office hours.

I am a biological anthropologist who seeks to understand human variation and evolution based on the study of populations from the last 10,000 years. In particular, I am interested in human adaptation in settings undergoing rapid change, often under social, cultural, and environmental disruption. My recent research has focused on the eastern Mediterranean basin, investigating the impact of Greek colonization of the Balkans from the 8th-6th centuries BC, by study of archaeological human remains from a series of sites in Albania, Italy, and Greece.

I currently co-direct the Bioarchaeology of Mediterranean Colonies Project (BMCP), which examines culture contact and human adaptation resulting from Greek colonization throughout the Mediterranean during a dynamic period in human history characterized by population interaction and the regional origins of ethnic inequality. The BMCP examines community health and trajectories of social change in the Mediterranean, and addresses the relationship between historical accounts of early colonial interaction and archaeological and bioarchaeological evidence. Team members include international researchers specializing in archaeology, classics, genetics, and bioarchaeology.

The BMCP is also committed to involving undergraduate students in independent research projects that contribute to our overarching research questions. I have taken students to Albania, Greece, and Italy to collect data and investigate questions for independent research projects. Some of this undergraduate research has been funded by a National Science Foundation (NSF) funded Research Experience for Undergraduates (REU) grant. If you are an undergraduate student interested in contributing to the Bioarchaeology of Mediterranean Colonies project, come see me during my office hours.

Saltini Semerari G, Kyle B, Reitsema L. Under review. Perils, Potential and Perspectives of Bioarchaeological Analysis in the study of Mediterranean Mobility. Journal of Mediterranean Archaeology.

Sulosky Weaver CL, Kyle B. Under review. At the Intersection of Biology and Identity: Nonmetric Traits as Indicators of Ethnicity in Greek Colonial Contexts. In: Bioarchaeological perspectives on inequality and social differentiation from the ancient Greek world. A. Lagia, S. Voutsaki, etGainsville, FL: University Press of Florida.

Kyle B, Reitsema LJ. 2021. Social variation in an urban environment and its impacts on stress: Preliminary results from ancient Greek Himera (Sicily). In: The Routledge Handbook of the Bioarchaeology of Climate and Environmental Change. G. Robbins Schug, editor. New York: Routledge. p. 205-220.

Kyle B, Schepartz LA, and Larsen CS.2016.Mother City and Colony: Bioarchaeological Evidence of Stress and Impacts of Corinthian Colonization at Apollonia, Albania. International Journal of Osteoarchaeology 26:1067-1077.