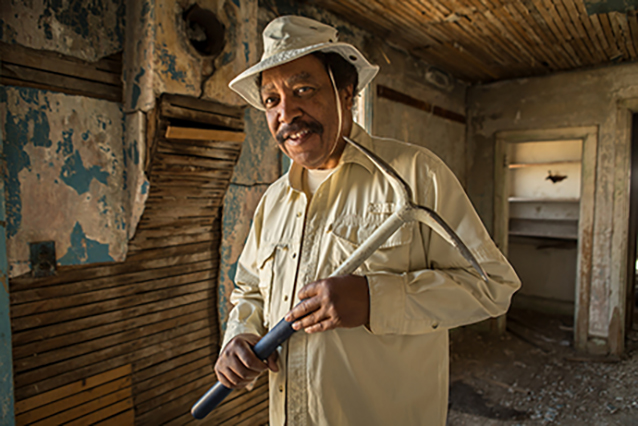 About 25 miles east of Greeley on U.S. Highway 34 along the South Platte River, the geography is wide and open. Here, at a settlement named Dearfield, some seven families began to build lives, frame homes and plant crops in hopes of establishing an African-American community in 1910. Over the next 20 years, the small settlement grew to a population of about 200 to 300, with two churches, a school, restaurant, dance hall, market and gas station.

Listen to the Bear in Mind Podcast, Episode 24 where Dr. George June discusses the role of African American in Colorado's rich history.

"The people of Dearfield wanted to have their own homes, their own land. They wanted to make it out here," UNC Professor of Africana Studies George Junne, Ph.D., says. "There's so much history out here on the Plains."

Junne's research on the community is one of a number of projects he's completed that spans from the Civil War era through the Civil Rights Movement in Colorado.

Last year Junne was interviewed and filmed for an award-winning PBS documentary called Clara: Angel of the Rockies. One of the first African-American women to live in Denver, Clara Brown was emancipated from slavery in Kentucky in 1858 and traveled west hoping to find her four children, who had been sold years before. She went first to Missouri, then walked most of the 700-mile distance from there to Colorado. In Central City, she established a laundry business and invested in mining claims. WIth a deep sense of community and a strong Christian faith, Brown sheltered those who were ill or homeless, gave money and time to community churches and became known as "Aunt Clara."

After searching most of her life for her surviving daughter, Eliza Jane, Brown reunited with her daughter at the age of 82. She died in 1885, and an estimated 400 community members and civic leaders (including Denver's mayor and Colorado's governor) attended her funeral.

"Clara Brown is a good example of the strength of black women. This woman, who did not have an education, helped shape the Black American West," Junne says. "You have a woman who comes from being personal property to being a successful businessperson.

"Black history is American history as well," he says. And it's history he shares with not only his UNC students, but with young scholars as well.

Back in Dearfield, Junne smiles as he talks about a group of elementary students who travel here from Denver every year. They walk the dusty road with papers and pencils in-hand, taking notes as Junne tells them about the people who lived here and worked hard to make it their own. In that moment, a century after the first families arrived in Dearfield, it is a place that still belongs to them.