College of Natural and Health Sciences 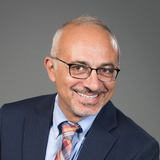 College of Natural and Health Sciences

Dr. Haddad previously served as vice provost for planning and academic resources and then as interim provost at California State University, San Marcos (CSUSM). During his tenure, CSUSM saw its freshman and transfer graduation rates reach record highs. Prior to joining CSUSM, Haddad served as the associate dean of the School of Natural Sciences, Mathematics, and Engineering at Cal State Bakersfield. Haddad is a senior Fulbright scholar and professor of mathematics.

Haddad was raised in Beirut, Lebanon, where he attended a French K-12 school. He immigrated to the United States at the height of the Lebanese civil war to pursue higher education, earning a bachelor’s degree in applied mathematics from the Georgia Institute of Technology and a PhD in mathematics in the area of topological and symbolic dynamics from the University of Maryland.

Kamel is an avid bridge player, a member of the Screen Actors Guild, an average (but committed) racquetball player, and a huge fan of his wife and two children.