The Bears are Back

The Bears are Back

The Bears are back on the gridiron this fall with Coach Ed McCaffrey at the helm.

For the first time in quite some time, there is a buzz in the air about Bears football.

The buzz comes not just with the long-awaited return of UNC playing football again this fall, but with their new leader at the helm as well.

The anticipation for UNC football began on Dec. 12, 2019 and hasn’t let up since. On that date, former Denver Broncos star and three-time Super Bowl champion Ed McCaffrey was introduced as the university’s next head football coach. The announcement brought a jolt of excitement within the UNC community, while also grabbing front page headlines locally and drawing regional and national attention.

“It truly is a new era at UNC,” President Feinstein said confidently at the introductory press conference.

Athletic Director Darren Dunn followed up by saying, “I think if we can work together, we can win football championships at UNC. We have done it before and we will do it again.”

After a 13-year playing career in the NFL (1991-2003), including his final nine with the Broncos, Ed McCaffrey couldn’t stay away from the place he loves — Colorado — and the game he loves — football.

Living just south of Denver, Ed coached his four sons (Christian, Max, Dylan, and Luke) in youth football. He called games for the Denver Broncos radio network as a color analyst. He started running his own youth football camps, too. But after his sons got older and his youngest, Luke, was about to be the last to leave the house, he realized it was time to try coaching at a higher level.

“Coaching gives me a sense of fulfilment, meaning and purpose,” McCaffrey says. “I feel like I have a chance to be successful and to do a good job of teaching kids the game and putting them in the position to succeed. I want to make a positive impact on as many kids’ lives as I can.”

With that in mind, McCaffrey took his first full-time coaching job in February of 2018, becoming the head football coach at Valor Christian High School in Highlands Ranch, Colorado. In two seasons at Valor Christian, he led the Eagles to a 24-2 record. Valor Christian won the 5A state championship in 2018 with Luke as the starting quarterback in his senior season. 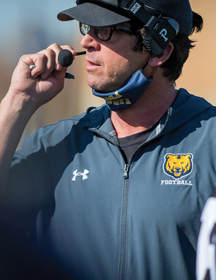 Head Coach Ed McCaffrey on the sidelines during a spring scrimmage against Chadron State.

In November of 2019, UNC announced it would be parting ways with Earnest Collins, Jr. ’96, who served as head football coach for nine seasons. Collins, Jr. led UNC to its first winning season as a Division 1 program in 2015. Under his leadership, the team’s Academic Progress Rate (APR) improved significantly, as did the graduation rate (66 percent to 82 percent), but the Bears were looking to notch as many wins on the football field as they did in the classroom.

When the UNC job came open, McCaffrey became interested. After conducting a national search, it didn’t take long for Dunn to realize McCaffrey was the right person for the job.

This is something I feel called to do,” McCaffrey said at his opening press conference. “This feels like home.”

In fact, Greeley was home for McCaffrey for nine summers as a Denver Bronco. Greeley is where Ed got his first introduction to Colorado, as Broncos training camps were held in Greeley at UNC facilities from 1982-2002.

“I have a lot of wonderful memories in Greeley,” McCaffrey says. “I spent nine years here as a Denver Bronco, training, living in the dorms, eating in the cafeteria, practicing on these practice fields. There’s history here, it’s personal for me. I have great affection for this area, our fans, and the people in this community.”

As the threat of the Coronavirus increased, UNC announced significant operational changes to keep the community safe. All classes were moved online following spring break, international travel was suspended,  and all upcoming university events were canceled.

The following day, the Big Sky Conference announced that all spring competition and practices would be canceled.

For the football team in particular, the announcement was devastating. Nearly three months into Coach McCaffrey’s tenure, there was a great deal of excitement within the program to see how things would come together during spring ball. The team was only a few practices in and was gearing up for their first full-padded practice before everything shut down and the majority  of players returned home.

“It was tough for us,” redshirt sophomore wide receiver Jaren Mitchell says. “We ended up having a lot of time to train at home, to get our bodies and minds ready, and then when we found out we weren’t going to have a season in the fall, that was really hard.” 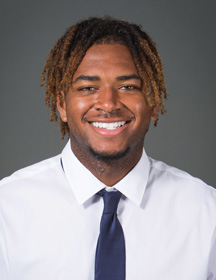 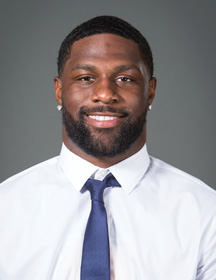 While most Division 1 Football Bowl Subdivision (FBS) teams had a shortened season last fall, the Division 1 Football Championship Subdivision (FCS) teams did not compete. The FCS season was moved to the spring and schedules were condensed, but some institutions, including UNC, elected not to compete due to the ongoing risk of the virus (UNC was one of five Big Sky programs to either opt-out of or pursue a modified spring schedule).

Instead of competing in the FCS spring championship season, the Bears were able to have a normal slate of spring practices and compete in two closed scrimmages against CSU Pueblo and Chadron State.

“Think about how hard it is to do nothing but train for a year and a half and not be able to play a game,” McCaffrey says. “It takes a lot of discipline, will power, hard work, and love of the game, which our guys have.

“When we were able to finally scrimmage against someone else, I’ve never seen that much enthusiasm from a team I’ve coached in my life. Guys were doing cartwheels, belly bumping, high fiving, it felt like the Super Bowl. It meant so much to me. I almost broke down in tears to see how excited and happy those guys were to be playing football again.”

When UNC kicked off the fall 2021 season at Colorado on Sept. 3, the Bears were 21 months removed from their last true regular season game. A nationally televised game kicked off the Ed McCaffrey era, and, as this magazine went to press, the anticipation loomed larger by the day. Despite the significant layoff between real games for  the Bears, the team looked at the extended  pause optimistically.

“We look at the disruption due to COVID as a positive,” says RJ Potts, a junior linebacker who transferred from Cincinnati. “With a new coaching staff and a lot of new players, we looked at getting more time to work together, learn the playbook, and build team chemistry as a plus for us.”

“The players have been so resilient throughout the coaching changes and the pandemic,” McCaffrey adds. “It’s been so challenging but the kids on this team are resilient, tough, physical, and they all want to make our fans proud.”

Pictured L to R: Dylan, Ed and Max McCaffrey. Dylan enters the season as the starting QB for the Bears while Ed and Max will split play-calling duties.

When you think of football families, the McCaffrey family is one of the first that comes to mind.

Ed was an All-American wide receiver at Stanford, a 13-year NFL veteran, and a three-time Super Bowl champ. In his career, he had 7,422 receiving yards and 55 touchdowns. In Colorado, the name Ed McCaffrey is almost as well-known as John Elway.

His second oldest son is the most well-known McCaffrey nationally right now. Christian, a star running back for the Carolina Panthers, was drafted 8th overall in the 2017 NFL Draft after setting multiple records at Stanford and finishing runner-up in the 2015 Heisman Trophy voting.

McCaffrey’s fourth season in the NFL in 2020 was cut short due to a shoulder injury, but he has still racked up over 5,800 rushing and receiving yards and 45 touchdowns in just 51 games. If you’re a fantasy football player, Christian is likely going in the top five in most of your drafts.

Ed’s youngest son, Luke, played two seasons at Nebraska and has since transferred to Rice, where he will play quarterback this fall.

But it’s Ed’s other two sons, Max and Dylan, that are making his collegiate coaching debut a mini family reunion.

Max, who played wide receiver at Duke in college and for five different NFL teams in four seasons, is the Bears’ offensive coordinator. Max was playing in the XFL when Ed was named the Head Coach at UNC and thought this would be a great time to break into coaching.

“I’ve always felt like my career would segue into coaching,” Max says. “I knew that my dad runs the offense I want to coach and thought this would be a great opportunity to be able to coach alongside him.”

Ed will also be coaching his second youngest son for the next two seasons. Dylan comes to UNC as a graduate transfer from Michigan, where he spent four seasons as a reserve quarterback. Dylan appeared in 13 games for Michigan, throwing for 242 yards and rushing for 166 yards. When he decided to transfer, he considered a number of schools, but ultimately said UNC was where his heart was.

“My dad and brother are two role models of mine,” Dylan says. “Now to actually work with them is a great honor. We grew up speaking the same football language. I think we have an amazing thing going with this team and we’re ready to get after it and turn things around.”

Dylan, who was a four-star recruit out of high school and rated one of the best dual threat quarterbacks in the country, has two years of eligibility remaining. He is likely the most heralded recruit UNC has ever had in football.

“When I was hired I never foresaw that Max would be coaching with me or Dylan would be playing for me,” Ed says. “It’s a real blessing to have them here and see them every day. It takes a special relationship when you’re a coach and a dad and you have a son on your team.

“Luckily I’ve coached my sons at different points and I’ve learned how to take my coach’s cap off and be a dad. It’s tough on me because his mom (Lisa) has big expectations and now I really can’t screw it up,” Ed says.

While Dylan will draw a lot of attention as the quarterback who just came from competing in the Big Ten, there are a number of Division 1 FBS transfers, including those from Power 5 (Big Ten, Big 12, SEC, ACC, Pac 12) schools, who have come to UNC and only heighten the excitement around the direction the program is heading. In addition to Michigan and Cincinnati, UNC has transfers from TCU, West Virginia, Cal, Washington State, Colorado, and Akron.

“We’re expecting to win,” says Scott Darnell, UNC’s Defensive Coordinator. “There’s no doubt about it. The goal will always be to win a championship.”

The players echo that sentiment.

“We want to be Big Sky champs and nothing less,” Potts says. “As long as we’re improving every day, I don’t see why we can’t. I don’t think there are any limits to what we can do.”  UNC

Editor’s Note: As this issue of UNC Magazine went to press, UNC was just beginning the football season. For the latest news and coverage of Bear athletics, go to UNCBears.com.