From the Vault - Vincent Jackson

From the Vault - Vincent Jackson

This May, ESPN announced that Vincent Jackson officially retired from the NFL. Truth be told, Jackson had decided to quit football five months earlier.

One of the best college and NFL wide receivers of his time, he had already plunged into life after football, fully ensconced as the full-time CEO of a real estate development and finance company he co-founded in 2008. He had stakes in seven restaurants nationwide. He’d started a nonprofit that honored his parents’ former occupations, the Jackson in Action 83 Foundation, which provides support to military families.

That was, honestly, the life he always thought he’d have, as a businessman and husband and father. Football was a last-second decision, albeit a good one.

At 35, Jackson is thankful for a 12-year career in the NFL, and even more thankful that his body doesn’t show it after playing football since he was 14. He avoided major surgeries and concussions.

“I was fortunate, trust me,” Jackson says. “I never took many major hits.”

Satisfied with his NFL career, Jackson reflected on his journey. By the time scouts came to watch him his senior year, to see if there really was a small-college wide receiver who was as tall as a small forward, weighed about as much as a tight end and could run like a track star, Jackson knew he had a tough decision.

Nearing the end of his record-setting UNC career, he had to decide on earning a degree or taking a chance to play in the NFL. Some projected him being drafted in the second round, which held the prospect of a lucrative contract.

“No, I chewed over it with my parents for a long time,” Jackson says. 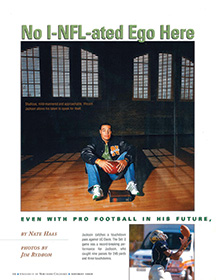 In 2005, the UNC alumni magazine featured Jackson in the article, “No I-NFL-ated Ego Here.”

In 2005, the magazine featured Jackson and these former UNC players, who’ve also since moved on from successful NFL careers:

Jackson had 15 credit hours left to earn a degree, and he worried that he wasn’t representing what it meant to be a student-athlete. UNC meant a lot to him, as it was the only university to offer him an athletic scholarship, even if he had to play basketball as well to get a full ride. He loved being a part of a program that grew into a Division I school. It was organic, he says, and made him feel like a grassroots athlete, not the pampered players he met from large Division I schools at the Senior Bowl.

“Those players talked about not going to class very much,” Jackson says. “But at UNC, it wasn’t like I couldn’t just show up to class. My professors had the same expectations of me that they did any other student.”

Yet, Jackson loved football. It WAS fun. It was so fun, Jackson swears he didn’t think about the money or the fame. He just wanted to play at the highest level and maybe prove that a small-school athlete could make it just as someone from, say, Alabama. So he told his parents that he was going to give the NFL a try.

Drafted in the second round by San Diego, Jackson would go on to Tampa Bay and finish with 540 catches and 9,080 yards with 57 touchdowns. He was one of the best receivers of the 2000s and made many fantasy football owners happy for his knack for big plays. He also, yes, made enough to set up his family for generations and became perhaps UNC’s most famous football player.

Jackson later finished his degree at the University of South Florida. He always wished he could finish it at UNC, but the demands of football wouldn’t allow him to travel to Greeley.

As he now mentors current and former players, one of the messages he emphasizes is preparing for life’s next chapter while they’re in the spotlight.

“You can network with any industry you want to be in,” Jackson says. “People will want to talk to you. There’s other options than coaching and broadcasting. Those are good options, but you can do anything you want, really.”

Jackson was prepared, he says, because of his hard-working parents, who insisted he take a job while growing up if he wanted a new pair of basketball shoes. Jackson worked many jobs, including at Coyote’s restaurant in Greeley (which inspired him to invest in restaurants), or busing at his parents’ military base and housekeeping at a Super 8.

“I don’t consider myself an expert,” Jackson says, “but even as a player, I was evaluating projects and trying to understand the business. You need to start preparing for your life now because in the NFL, you never know when that’s coming.”