There were times during Rob Kuseski’s standout career at UNC that tennis felt like a grind. He enjoyed it, but his body ached from the physical toll.

That was in 2001, when he made the conference All-Academic team, was voted Colorado Collegiate Player of the Year, won the Rolex regional tournament, and finished sixth at nationals.

Now 38, he’s a tennis pro for the Highland Meadows Tennis Center in Windsor. He spends close to 40 hours a week on the court teaching players of all ages and abilities while still competing himself. In 2016, he was the nation’s top-ranked doubles player for the 35-and-over division in the United States Tennis Association. In singles, he spent 2016 ranked close to the top 10 in 35 and over. He’s playing more tennis, not less, than he did in college, and he manages the physical demands more carefully.

“Tennis isn’t a collision sport, but it’s still physical,” Kuseski says. “When you’re younger, you just sort of push yourself until you break. I’ve gotten a lot smarter.”

Since graduating in 2002, Kuseski acknowledges there are other differences as well. He’s now married and has a 2-year-old daughter. He lives in Loveland, where he went to high school, and has a strict workout routine, with lots of physical therapy and extra work on a nerve issue in his shoulder. And he has to eat a good diet and keep his weight down. 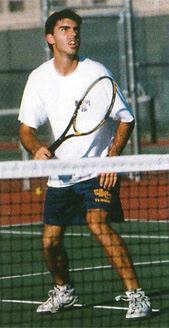 The UNC alumni magazine featured Kuseski in the May 2001 issue. The article, “The Quiet American.”

But the physical nature of the sport has one constant: Ice. Lots of ice. “Every day, I’m icing something,” he says and laughs. “But I can’t complain.” He enjoys his job, one of only a handful of tennis pro jobs in northern Colorado, and he’s busier than ever as a coach. He likes teaching beginners, young or old. He tries to instill in them a desire to win, but win fairly, a trait that earned him the James O’Hara Sargent Sportsmanship national award when he was at UNC. He prefers to act like a gentleman on the court, and he expects his players to do the same.

He also runs a junior program with 150 players and relishes a chance to coach some of the region’s best players. One of his players, Ky Ecton, won the No. 1 singles state title last year as a junior for Poudre High School in Fort Collins.

As for his own game, Kuseski credits his high ranking in doubles to playing and practicing with a small group of older, experienced specialists who push him to be great. This year, he looks forward to aging up and competing in the 40-year-old division.

“I’ve always said to people that I still love playing it as much as anything I do in life.”