By recording birdsong in the field, Lauryn Benedict and her team bring the music of the canyon and rock wrens into the lab for exploration. 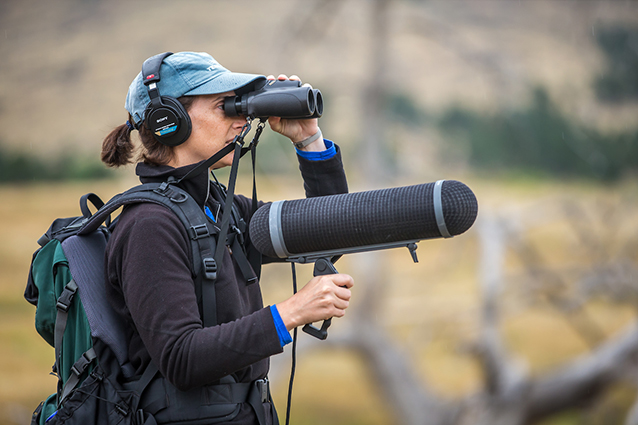 It's a gray fall morning at Bobcat Ridge Natural Area just west of Loveland. UNC biology professor Lauryn Benedict, Ph.D., doctoral student Nadje Najar and master's student TJ Hathcock walk along a high path, then stop as Hathcock lifts his binoculars and looks toward a rocky outcropping.  Hathcock has picked out the sound of a rock wren, and Benedict and Najar hear it too, lifting their own binoculars.

Benedict, Najar and Hathcock have focused their research on rock wrens and canyon wrens, whose iconic songs are part of the acoustic fabric of rocky western habitats. The team studies social behavior and communication, as well as habitat use, in these cliff-associated wren species.

The songs of canyon and rock wrens haven't been studied much, so the team's work at UNC is an important foray into new areas. They're looking at how:

Although closely related, a curious and significant different between the two wrens has to do with the number of songs in their repertoires. While a canyon wren sings about five different song types , a rock wren sings a loquacious 120 songs. Why have two closely related species evolved so differently from a communication standpoint?

That's a question that could bring insight into how bird behavior and communication are shaped by factors like social context, habitat and population density.

Studying how and why these little brown wrens communicate can be an exercise in patience. Describing a typical day in the field, Hathcock says he's often awake at 4 a.m., spends about an hour driving to the field, then hikes in (loaded with recording equipment, binoculars and a backpack), and sets up and waits (sometimes for hours) for the show's star to appear. But it's work that he loves. And it's a love for science that he hopes to share once he finishes his master's degree in Biology by becoming a high school teacher. "My generation is so tech-oriented," he says. "We're really trying to get kids out of the classroom."