Gain the knowledge and skills you need for success in the dynamic, transcultural world of English.

The Department of English offers students the opportunity to follow their passion for reading and writing. Our English programs ground students in the knowledge and practice of cultural, literary, and rhetorical interpretation and history, and offer them the platforms to develop into highly proficient academic, creative, and professional writers.

In addition, we train teachers in a variety of pedagogical models and encourage them to reflect critically upon the teaching profession and their place therein. We produce literate citizens and teachers of exceptional merit, with the ability to interpret and contextualize acts of signification in relation to their conditions of production and reception.

Develop advanced analytical thinking and communications skills you can apply to virtually any career. Blending studies in literature, language, writing and speaking, the Liberal Arts concentration provides you with a foundation for professional and graduate study options.

Join one of Colorado’s top English teacher preparation programs. Not only do we place student teachers throughout the state, the job placement rate for our English secondary teaching majors is almost 100 percent.

Explore rhetorical, critical, and cultural theory and a range of technological tools used in various sectors of the publishing industry. This program intentionally focuses on career readiness and employability.

What can you do as an English major at UNC?

To find more about opportunities and events in UNC’s English BA, check out the UNC English Department's Facebook page.

The History of Bookmaking

English 495, The History of the Book, demonstrates how books were created before the printing press.

Being able to get a true feeling of all the components of the book, from how it's made to how it began, has been immensely satisfying as an English major and fellow book lover.

Your Future in English Language Studies

Consider UNC's English B.A. if you want to: 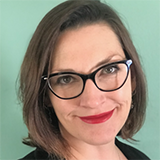 Dr. Sarah E. Cornish earned her Bachelor’s degree at the University of California, Irvine, her Master’s at Boston College, and her Doctorate at Fordham University. She is currently the Director of Graduate Studies for the English Liberal Arts MA program and teaches both Undergraduate and Graduate courses. Her teaching is deeply informed by her research and her commitment to exploratory learning through multimodal and archives-based collaborative projects.

Dr. Cornish’s research focuses on British and American (transatlantic) modernism, particularly understudied women writers and literary and social culture of the periods spanning the First World War, the interwar years, and the Second World War. Her theoretical interests lie in feminist theory, space/place theory, particularly architecture and the built environment, material culture, narratology, and film history and theory. She has recent articles in Twentieth-Century Literature (Duke UP) and Feminist Modernist Studies (Routledge), co-edited a special issue of The Space Between: Literature and Culture 1914-1945 “International Cinema in the Space Between: The Long Decade of the 1930s,” and has a chapter in Teaching Modernist Women’s Writing in English edited by Janine Utell (Modern Language Association Press, 2021).

She is also the current president and co-founder of the Feminist inter/Modernist Association (FiMA), which is the professional organization for Feminist Modernist Studies. FiMA offers support to scholars working on women writers, feminists, and culture-makers of the late 19th through the mid-20th century (1870-1970). Emphasizing modern women, gender, sexuality and feminist issues, the society offers networking and resources for ongoing research and teaching in the burgeoning feminist areas of cultural studies and transnational studies, for the recovery of underexplored or “lost” women writers and producers of art/culture, and for new developments in feminist critical theory. Other professional commitments include serving on the Advisory Boards of The Space Between Society and the Orlando Textbase for Women Writers from the British Isles (Cambridge).

In 2014, Cornish received UNC’s First Year Scholars Outstanding Faculty and Staff Award, and she was nominated for UNC’s Inspiring Woman Award in 2015. Locally, Dr. Cornish is a founding member and serves on the Board of Greeley’s Go West Film Festival.

English majors bring communication, critical thinking, creative and interpretive skills to the job market that are in demand in a wide variety of careers. An English degree also provides an excellent foundation for pursuing further graduate study. These are just a few of your options: