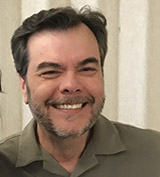 Over the years, Dr. Ryan has done considerable work in grant writing and administration for Georgetown and Arizona State Universities with such units as the Hispanic Research Center and the Office of the Vice President for Education Partnerships where he contributed toward the improvement of educational opportunities for the Latino community. Dr. Ryan’s work has taken him to such places as Spain, Italy, France, Greece, the United Arab Emirates, Hungary, Panama, the Dominican Republic and Puerto Rico, where he has made presentations in both English and Spanish. Other positions he has held included undergraduate advisor for Spanish majors at Arizona State University; cultural coordinator for the American Institute for Foreign Study’s Summer Program in Salamanca, Spain; and English instructor for Centro Británico, also in Salamanca. Before attending college, Professor Ryan was one of five winners of the prestigious Herencia Española National Essay Contest. Since 1983, Dr. Ryan has been a member of Georgetown University’s Lamba Beta Chapter of Sigma Delta Pi, the National Collegiate Hispanic Honor Society.

Recent combined enrollment of heritage (HL) and non-heritage (L2) speakers in my intermediate Spanish courses (originally designed exclusively for non-heritage students) has created the urgency to rethink the organization, sequence, and emphasis I place on topics and structures in the classroom. Hence, this project present, originally funded by a 2017 Summer Support Initiative grant, compares HL and L2 word- and sentence-level error data I collected from my students in Spring 2017 and examines such questions as how one might continue teaching Spanish grammar to an expanded audience and, at the same time, more effectively address the different needs of both HL and L2 learners. I recently published (in 2018) an article based on this research in the Journal of Language Teaching and Research, and a second article (in 2019) on a new peer-review, self-evaluation module that I have effectively incorporated into my intermediate classes. I also shared my findings with Colorado high school Spanish teachers at a special session of the 2020 Colorado Congress of Foreign Language Teachers meeting. I continue to collect consensual data from my students for this project with an approved IRB protocol.

Verbs are arguably the most important word in any sentence and the much of my theoretical work concerns itself with the emergence of verbs in first language learners of Spanish and other languages. This began at UNC with the publication in 2012 of my first book, The Genesis of Argument Structure: Observations from a Child’s Early Speech Production in Spanish, in which I provide important evidence for existing verb structure in Spanish speaking children, even at the one-word stage of production. Since that time, with a 2012 Research Dissemination and Faculty Development Award, a 2012 Summer Support Initiative Award, and a Spring 2013 Faculty Reassignment Award, I expanded the project to analyze significant amounts of additional data from the Child Language Data Exchange System, an online repository of first language transcripts. These efforts enabled me to corroborate my original findings with additional Spanish and Italian data, make some new cross-linguistic observations, present my findings on the developing stages of this project at four international conferences , and produce six peer-reviewed papers, two most recently in 2017 and 2020. Future plans include the submission of a proposal to the National Science Foundation to expand the project to analyze an additional five languages.

A Holistic and Contextual Grammar of Spanish

A future book I am writing, titled Gramática contextual y razonada de la lengua española (roughly translated to English as A Holistic and Contextual Grammar of Spanish). The grammar, for which I have already produced seven chapters, promises to be a unique, holistic approach to the teaching of advanced Spanish grammar that draws on my and others’ scholarship from several areas of linguistics, including but not limited to, historical linguistics, language typology, and an understanding of the basic ways in which all human languages work. I continue to work on this book as time permits and plan to finish it during my next sabbatical. Once the manuscript is completed, I intend to submit it to Georgetown University Press for publication consideration.

This large-scale project that studies changes over time in format, content, and more specifically, language in American immigrant language newspapers of both this century (in Spanish) and the previous one (in Spanish and Italian) and explores how immigrants evolve over time in the way they portray (in their own words) the effects of immigration, the extent of home cultural/linguistic preservation or loss, as well as stages of target assimilation or transition. In the summer of 2014, I presented preliminary results of this project at the International Conference on Historic Newspaper Discourse (CHINED) in Helsinki, Finland. In 2015 and 2016 with the assistance of a second UNC New Project Program award and a small external grant from the Immigration History Research Center and Archives at the University of Minnesota, I was able to travel to both the Rhode Island Historical Society Library and the Immigration History Research Center and Archives to finish data collection and analysis of Italian data. A peer-reviewed scholarly paper on this research was published during the period (Ryan 2017) as the contribution to an edited volume titled Diachronic Developments in English News Discourse. My new focus has to do with the notion of campanilismo and how the focus of this notion among newspapers shifts from country of origin to that of the target country. To this end, in summer of 2018, I attended the three-week Italian American Diaspora Studies Summer School in Rome, Italy, where I shared my work up to that point and gathered new ideas and information to help with the next steps of this project.

Capstone of most of my scholarship for the past five years examines the structures of Romance languages other than Spanish (particularly those in the south of Italy), which I have found to exhibit a number of characteristics that, although unattested in existing early Spanish texts, would help explain how Latin transitioned to structures that HAVE been attested in Spanish and other languages of the Iberian Peninsula. This work was the focus of my recent 2017-2018 sabbatical, . In Spring 2015, a Faculty Reassignment Award provided me the time necessary to conduct additional research and to further develop this idea for a peer-reviewed book chapter, published in 2017 by Ohio State University Press. Expansion of this work to the specific topic of phonology has yielded yet another peer-reviewed paper for an edited volume titled Production and Perception Mechanisms of Sound Change, sponsored by the University of Salamanca, Spain and published in 2018. A second paper was produced for another volume in 2021. Since its inception, the developing stages of this project have yielded nine presentations at annual professional meetings. My sabbatical produced a book manuscript that integrates my data collection, analysis, and paper presentation efforts thus far, and will constitute my second published research book. I am revising the draft of this manuscript with feedback from knowledgeable colleagues and will submit it for publication.

Another data-intensive project I have undertaken at UNC has to do with the relexification of diminutives in the Romance languages, a process whereby the diminutive suffix morpheme (e.g., -illa ‘little’) has lost its separate “diminutive” meaning and has adjoined to the word root (e.g., torta ‘cake’), becoming reanalyzed along with that root as an entirely new single word root or morpheme (e.g., tortilla not meaning ‘little cake’). Relexification of diminutives is a highly understudied phenomenon, yet it is one of the most prolific means of new word creation in Spanish. With the assistance of a 2012 UNC New Project Grant and a 2014 Summer Support Initiative Award, I partnered with Dr. Víctor Parra-Guinaldo, of the American University of Sharjah, and hired undergraduate research assistants here at UNC to catalog the entirety of historically diminutive forms in Spanish that have become relexified. This project, which is intensively quantitative, analyzed data from Stahl and Scavnicky’s Reverse Dictionary of the Spanish Language (1973), the online Dictionary of the Spanish Royal Academy, as well as the Critical Etymological Dictionary of Castilian and Hispanic Spanish. After analyzing the data in Fall 2013 semester, Dr. Parra-Guinaldo and I presented project results at both 2014 and 2016 International Conferences on Historical Lexicology and Lexicography, and most recently, at  A joint peer-reviewed article of our findings was published in 2016. In 2018, I obtained a UNC Summer Support Initiative grant to collect and analyze data for this same phenomenon in Italian. Since that time, I have presented comparative results for Spanish and Italian at several conferences, including the 2017 International Conference on Historical Linguistics, 2019 RMMLA, and 2020 International Conference of Languages and Linguistics.  A second article was published by the the Athens Journal of Philology in 2021.