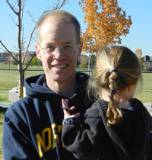 B.A. - University of Massachusetts at Amherst

In 2004, I received my Ph.D. from Harvard University. Following graduate school, I moved to Denver, Colorado for a postdoctoral training fellowship in a brain-imaging center within the Department of Psychiatry, at the University of Colorado at Denver Health Sciences. My postdoctoral research involved the exploration of neural mechanisms associated with the development of autism. My research on autism has been featured in both mainstream and scientific media including the Journal of the American Medical Association, Nature Online, BBC News, New Scientist, and Brain Works.

In 2006, I joined the University of Northern Colorado and received tenure in 2013. Currently I am involved in a longitudinal study examining the impact of child maltreatment on students’ adaptation to the college environment. My collaborator, Dr. Marilyn Welsh, and I hope our research informs targeted interventions that support students with a developmental history involving psychological trauma. Our research has been featured in the Greeley Tribune.

Since joining UNC, I’ve taught many different courses across developmental and cognitive psychology including: Cognition, Social Cognitive Neuroscience, Child and Adolescent Development, and the Psychology of Autism. Both as an instructor and a researcher, I am strongly committed to the cognitive neuroscience approach that emphasizes the interdisciplinary study of psychological phenomena across multiple levels of analysis.

Across the past few years, I’ve been working, in collaboration with Dr. Marilyn Welsh and several students, to explore the impact of childhood maltreatment on students’ adaptation to college. The research literature makes clear that students with a developmental history involving psychological trauma are at increased risk for poor college outcomes including drop out. At the same time, many students with such a difficulty developmental history show resilience. Our central goal is to understand what cognitive and emotional factors contribute to individual outcomes given a maltreatment history. Can we identify aspects of an individual’s current psychological being that predict whether he or she will be relatively more vulnerable (or resilient) given a history involving psychological trauma? We believe such a refined understanding may inform targeted interventions.

Our research program involves a longitudinal investigation. First, in an initial lab visit, we recruit participant groups (students with a maltreatment history and students with no such history) and obtain permission to follow their academic progress (e.g., GPA, years to graduate, satisfaction with college, etc.) across their time at UNC. Second, across subsequent lab visits, we invite these students back in order to measure current psychological functioning. Below is a sampling of psychological variables that we are currently exploring:

Our research is supported by the Avielle Foundation (dedicated to the public health goal of violence prevention) and by an internal Provost grant from UNC.

Welsh, M., & Peterson, E. (2014). Issues in the Conceptualization and assessment of hot executive functions in childhood. Journal of the International Neuropsychological Society, 20(2), 152 – 156.

Peterson, E., & Miller, S.M. (2012). The Eyes Test as a measure of individual differences: How much of the variance reflects Verbal IQ rather than social cognition? Frontiers in Psychology, 1 – 6.