UNC’s online Doctor of Nursing Practice (DNP) empowers you to affect the future of nursing and health care delivery. Available to practicing MSN / APNs, this two-year, online DNP program prepares you to be a clinical expert with a focus on the critical thinking, leadership and political policy skills needed to advocate and create changes in healthcare practice at the individual, population and organizational systems levels. The DNP curricula provides content in evidence-based practice, quality improvement, and systems leadership, among other key areas.

As the terminal degree in nursing practice, the DNP provides an alternative to research-focused doctoral programs and brings you to the highest levels of scientific mastery and critical analysis. Critical to the DNP degree is the development of the doctorally prepared clinical scholarly project.

The post-master’s online DNP program requires 44 credits of coursework and about 1,000 clinical hours. You can apply the clinical hours logged in your master’s program toward the 1,000-hour requirement. The DNP program includes three required visits to the University of Northern Colorado campus. You’ll finish the degree with a DNP scholarly project that addresses issues you encounter in your own professional practice. The DNP program is accredited by the Commission on Collegiate Nursing Education (CCNE).

Your Future in Nursing Leadership

The aging of the U.S. population, combined with changes in the health care system, has resulted in a critical demand for leadership in the nursing profession. Current health care trends have left nurses with more responsibility than ever. The post-master’s DNP degree empowers you to analyze the scientific, technological and policy factors that influence the profession. You’ll be equipped with high-level expertise to help you bring about positive change for colleagues, patients and the communities you serve.

Consider UNC’s DNP post-master's certificate if you want to: 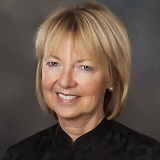 Faye Hummel’s numerous contributions to the nursing program at UNC have helped to improve the education and profession of nursing, including developing nursing courses that focus on diversity and culture. With the help of two colleagues from other universities and the creation of the Friendship Bridge Nurses Group, she also helped bring the first master's program in nursing to Vietnam.

For nearly two decades, the group has recruited nurses from across the United States to teach in the Southeast Asian country. The arrangement began with courses in undergraduate research and public and medical health, but did not confer a degree. In 2007, a master's program through the University of Medicine and Pharmacy in Ho Chi Minh City was created and has since seen six cohorts of students receive degrees.

As a result of her work at home and abroad, Hummel was chosen as the 2015 recipient of the M. Lucile Harrison Award, one of UNC's top faculty honors.

Where can your certificate take you?

Translation of evidence to practice