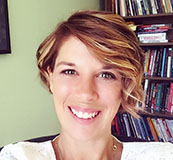 Pronouns: She, her, hers
Department of Sociology
College of Humanities & Social Sciences

2016 “The Price Mothers Pay, Even When They Aren't Buying It:  Mental Health Consequences of Idealized Motherhood.”  Sex Roles: A Journal of Research 74(11): 512-526 (with Dr. Angela Henderson and Sandra Harmon).

2014 “Embodied Activism without Bodies? Analysis of Embodiment in the Breastfeeding and Male Circumcision Movements.” Sociology of Health and Illness 36(5): 639-654 (with Dr. Laura Carpenter).

2011 Review of Opting Out: Why Women Really Quit Careers and Head Home, by Pamela Stone.  University of California Press, 2007.  In Work and Occupations: An International Sociological Journal 38(4): 514-516.

Dr. Harmony Newman is an Associate Professor and Graduate Program Coordinator of Sociology and Gender Studies at the University of Northern Colorado (UNC). She joined the UNC faculty in 2013 after earning her Ph.D. in Sociology from Vanderbilt University. She has taught courses both on-campus and online in UNC's undergraduate and graduate programs on a range of topics including gender/race/class, social problems, health and illness, research design, and qualitative methods. Dr. Newman has conducted research primarily in the area of gender, including motherhood and undergraduate STEM education. Her current research project focuses on barriers to equitable experiences for female students in science field courses.