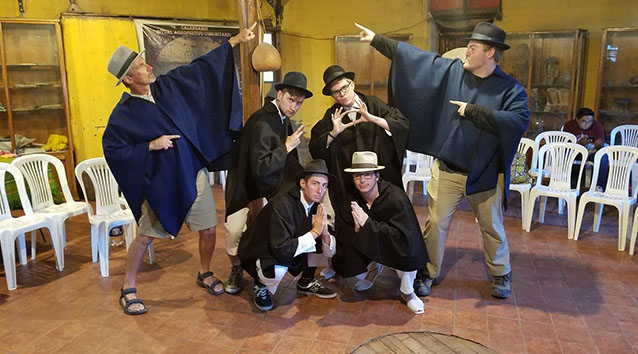 (Above: Jeff Hoffman (far right) and the UNCO 'Poncho Boyz' in Ecuador)

Hello! My name is Jeff Hoffman. I am a graduate student at the University of Northern Colorado. I am currently going for a professional science master’s in environmental geosciences as well as a graduate certification in Geographic Information Systems. After taking a volcanic geology course in which I conducted a GIS volcanic risk assessment of Cotopaxi, a stratovolcano in Ecuador, I decided to take a course that involved a trip to Ecuador (including Cotopaxi).

While this trip was focused on culture, environment, and science, and thus I probably should have written this blog post about one of those things, I believe that this trip did something for me that is much more impactful than anything else: it gave me a new outlook on life and made me aware of what I truly want to do and where I want to be. Because of these things, I also have yet to experience any of my normal depression symptoms that I was experiencing prior to the trip. I suspect many of the students on the trip will write about the environment, or science, which is great and will provide a lot of valuable information. I believe that, especially with a lot of the emotional difficulties many students experience today, there should be some attention paid to the emotional benefits of spending time out of the country.

I will be open in saying that certain events in my life at the end of 2015 have caused me to be in a position where I was absolutely lost regarding my ambitions, hobbies, emotions, etc. This lack of direction put me in a terrifying place mentally and emotionally from the winter of 2015 through the summer of 2017. These issues had affected my performance at both work and school, as well as my social interactions in a negative way. I spent so much time and energy during this period longing for some way to get back on track with my life and regain a sense of self-confidence, self-worth, and ambition that I didn’t focus on much else and this made it very hard to focus on school and work as much as I needed to. Because of this, the thing I am most thankful for with this trip, is that it got me out of the position I was in. It put me back on track.

I spent much of my life as a homebody, never going, nor having the desire to go, anywhere outside of where I was comfortable. I had never been out of the country. I had never experienced other cultures. I’d been given opportunities to do so, but I never took them because I originally didn’t care too much. I liked what I was used to. It was during my “year and a half of darkness” that I had finally decided that I was tired of living that way, and I allowed myself to tackle my own anxieties about going somewhere completely different, and I loved it.

For someone who was highly considering not going on the trip due to their own fears and anxieties, I felt that I was much more comfortable during this trip than most others in the group. Things that seemed to bother the rest of the group – being homesick, bugs, quality of life, not having access to the food they are used to, etc. – didn’t bother me at all. There was nothing and no one that I truly missed, I didn’t mind the bugs, I didn’t mind the lack of air conditioning, high speed internet, and other luxuries. I even got angry with the rest of the group a few times for how often they wanted to get food that they could easily get back in the United States. This observation of myself made me start thinking about the possibility that maybe I am not meant to spend much of my life in the United States, and I found solace in this recurring thought. At the very least, it made me realize that I need to go somewhere different, be it a different state or country. 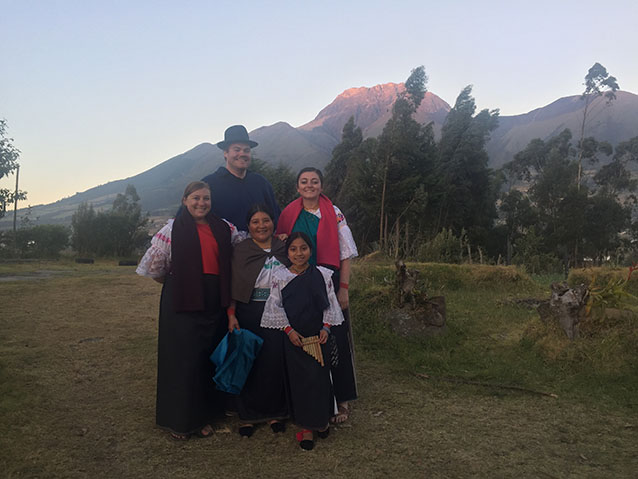 The mother and daughter of the family my group stayed with in the Agato community.

I think what impacted me the most about the trip, however, was the time that we stayed in the Agato community. We were split into small groups and stayed with host families. Our family spoke very little English. However, I understood a fair amount of what they were talking to us about because of having taken multiple years of Spanish in middle/high school. I absolutely enjoyed the challenge of communicating outside of the language that I had used my whole life. This aspect of the trip made me adamant to start improving my Spanish as well as teach myself Japanese. I’ve at least kept up with the Japanese since the trip.

The other thing I loved about the Agato community were their ideals on family, community, and life. The families were very close and they always spent time together, whether it was cooking, doing crafts, etc. The communities were very close in this regard too. These people are nowhere near as technologically advanced as people are in the United States, yet they seem to not be affected by emotional issues such as depression to the same extent as people in the United States. They seem to be so much happier despite having so much less. I think the reason why is because of their views on life.

I had asked my host family, in the best Spanish I could muster, “what is the meaning of life.” I got an answer that was so much better than the typical “I don’t know”, “There is no meaning”, and “42” - answers that I would get in the United States. I got something along the lines of the following: “Everyone and everything has a role in the world and in the community that they are given by mother earth. Men have roles, women have roles, children have roles, animals have roles, plants have roles. We accept the roles we are given and do our best with these roles to respect mother earth’s gift. Everyone is given a gift, and we must find out what that gift is so that we can share it and give back to the world and community.”

I think on this and I notice that here in the United States, so many people do not accept the roles and gifts they are given. So many people seek to forget who they are, and where they come from, instead of utilizing the roles and hands they are dealt to the best of their ability. Perhaps this is one reason why there are so many issues in our society, and why so many feel that they aren’t good enough? 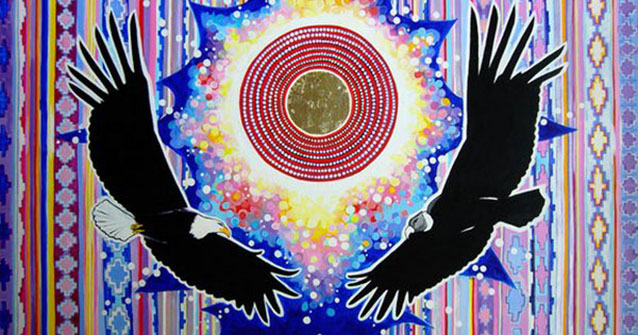 The eagle and condor prophecy.

While in the Agato community, we were given a quote that is from a prophecy: “The eagle and the condor will fly through the sky together.” At first glance, it seems like a simple prophecy, and one would interpret it as there will be harmony between the north (United States having the Eagle as its national bird), and the south (Ecuador having the Condor). However, what is meant by this prophecy is that there will be harmony between the mind (represented in their culture as the eagle) and the heart (condor). The idea is that for one to be at peace, one must allow their mind (things like logic, technology, etc.) to work together with their heart (things like ambitions, instincts, etc.).

This prophecy really made me aware of some of the issues I have been going through. I have spent so much of my life, ESPECIALLY in the last year and a half, only letting my mind lead and not following my heart at all. I focused too much on thinking logically, and thinking in general. I didn’t allow myself to follow any cues that my heart was giving me because I either felt they were illogical, wouldn’t get me anywhere, etc. Perhaps this explains why I had been experiencing so much inner turmoil. So many people here in the United States only let their mind dictate their life, and others only let their heart dictate their life. Maybe this explains why so many people in the United States experience the same inner turmoil that I was. Heck, we have pretty much driven condors in the United States to the point of extinction. Either way, hearing this from the community impacted me a lot, and I have since decided that I will follow my instinct, I will follow my passions, and I will let my heart make more decisions in my life.

There were so many things about this trip that helped me and I am so thankful for that. Between doing something completely different than what I am used to, having new experiences, and being around the Agato community, I am now feeling so much better than I was before. I loved the challenges presented, and the change of pace. Now I know that what I want to do with my life is to use my knowledge of earth science and geographic information systems to work for organizations to solve geospatial problems in other countries. I want to be able to use this skillset to be able to travel more as well, and I may eventually try to incorporate my teaching experience into this path as well. This trip redirected me and gave me a new outlook on life, and for that, I am extremely thankful.