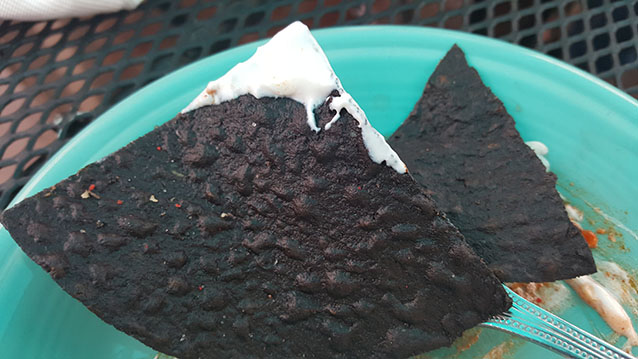 Exhibit A (above): The nachos I ate while pondering my future trip to visit the glaciated volcanoes of Ecuador. 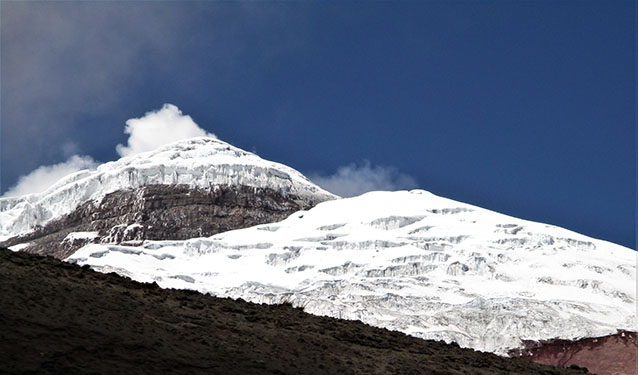 As it turns out, the Cotopaxi volcano in Ecuador is actually not all black, is less prominent than a nacho chip, and has much more “sour cream” than I expected!

From the glacier line to the summit of Cotopaxi, glaciers persist for over 3,000′ of elevation. They are immense, towering spectacles. The glaciers appear in the interlude of dancing clouds which blanket the peak most of the day. Prevailing southeasterly trade winds create this movement aloft as moisture from the Atlantic Ocean passes from east to west over the high elevations, producing clouds and intensifying the rare moments of glacier exposure to the onlooker.

Considering that Cotopaxi is near the equator, it seems hard to believe that glaciers can exist at a latitude normally associated with heat. Tropical glaciers exist not only in Ecuador but also throughout the Andes mountain range, in eastern Africa, and Indonesia. These features are particularly sensitive to global climate variation, and are therefore a strong indicator of atmospheric warming. In the last 30 years, the glaciers of the Andes have retreated by 30-50%, and are not expected to survive another 30 years. The loss of these glaciers has implications in water resource management, a change in the local climate patterns, and the loss of unique ecosystems and wildlife. Additionally, tropical glaciers are themselves an irreplaceable historical catalogue of past climates which can be revealed by analyzing ice core samples; this record will no longer be available once the glaciers have gone.

In order to truly say if a glacier is disappearing, we need science, and good definitions. The health of a glacier can be described by characterizing the areas where snow accumulation is maintained. The accumulation zone is the area of the glacier where there is greater mass gained than there is mass lost- which can be influenced by changes in precipitation, wind displacement, or an increase in temperature. In the ablation zone, the opposite is true and the reduction of glacial mass is more prevalent than the build-up of it. Between these zones there lies a transitional region where the snow and ice gained equals the snow and ice lost. The elevation at which this occurs is called the Equilibrium Line Altitude (ELA). The ELA for inner-tropical glaciers can be visualized as a ring around the top of the mountain where the temperature is consistently at 0’C. As the average temperature increases each year, the ELA creeps up the mountain. 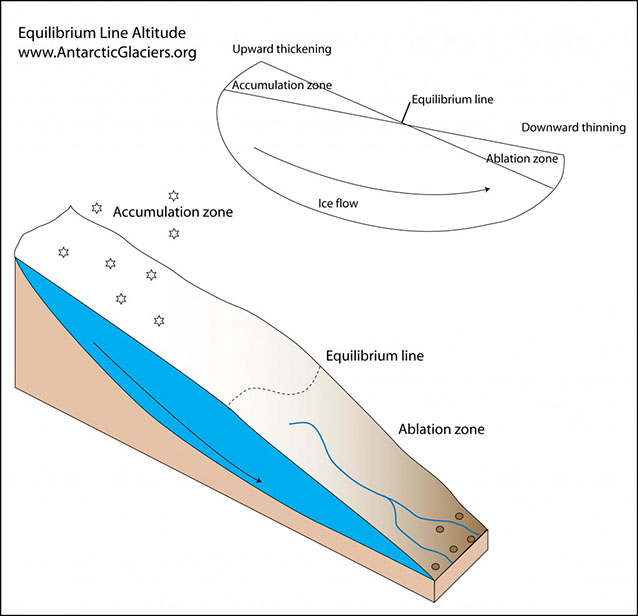 The mean annual area of the glaciers on Cotopaxi were last estimated to be diminishing at rate of 2.6% per year. This rate was approximately the same as the average tropical Andes glacier, so keeping an eye on the ELA and glacial mass of Cotopaxi might be a good representation of the average trend in the Andes. Check out this paper on the current state of the tropical Andes for details about glacial mass loss rates.

¡Esta es una sopresa! The sight of the glaciers of Cotopaxi were a surprise to me because I’ve only ever seen them in places like the North Cascades and Glacier National Park. In these parks, cirque glacier and valley glaciers are the predominate glacier types; they can be found nestled in the bowls between peaks or in valleys, where they seem more protected than those atop volcanoes. The ice cap on Cotopaxi is composed of 19 outlet glaciers which are slathered gratuitously on the peak, stacked in mounds with columns of blue ice. To add to the dramatic scene, this ice cap is situated atop the only peak in the area, making it seem that much more exposed and unique in the landscape. The sight of grandiose glaciers on Cotopaxi was a wonderous sight, but there were also smaller and more intimate surprises on our travels.

A street vendor in Mindo, Ecuador sold us these little bags of surprises (sopresas) for 25 to 50 cents, USD. We were so excited to see what might be in them. It was a moment to recognize how special the little things can be, especially for such a low cost. That’s a way of life I admire! 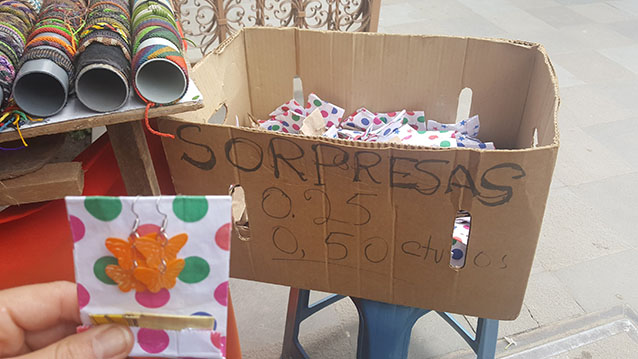 Box of surprises in Mindo, Ecuador.