Catch Up with the Doyenne of Science Fiction Writing

Think of an author getting to work, and you may picture a claustrophobic study, a desk littered with loose drafts stamped with many cups of coffee, walls haphazardly stuffed with books, and a single typewriter cresting above the chaos.

For Connie Willis, a 1967 alumna with degrees in English and Elementary Education, the process of writing a book begins at Starbucks, with papers and notebooks spread across the table — no laptop in sight. It might be hard to think that one of science fiction’s greatest champions accomplishes all that she does in a noisy coffee shop off of 11th Avenue, but Willis does just that, twice a day.

“They all know me by name here, and they know what I order. If I try to mix it up on them, I have to shout it out from the door; otherwise they’ll have it already prepared for me,” Willis says and laughs.

Since the alumni magazine last featured her (see Spectrum, May 2000), Willis has published 15 novels, short stories and essays, and has been awarded or nominated for awards 12 times. She was inducted into the Science Fiction Hall of Fame in 2009, and in 2011 she joined the company of writers like Ray Bradbury, Robert A. Heinlein and Isaac Asimov when she was awarded the title of Grand Master by the Science Fiction Writers of America. Over the course of her career, she’s won more major science fiction awards than any other writer.

She’s most proud of her novels Blackout (2010) and All Clear (2010), which deal with researchers from the year 2060 traveling back in time to observe key events in World War II. The researchers find that they’ve been placed at the wrong dates and in the wrong places, and they struggle to return home without impacting the course of history. 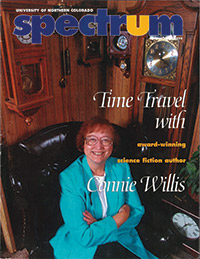 The UNC alumni magazine featured Willis in the May 2000 issue. The article, “Hairnets, High Noon and Hansen-Willis Hall."

The best way to start with Connie Willis’ works:

For Willis, making the average person confront complex moral dilemmas and battle the odds is a lot more interesting than writing a classic “good vs. evil” story.

“I always write about ordinary people who are caught up in situations that they’re not equipped to handle,” she says. “I hate human villains; I don’t think they’re very interesting. I’d much rather put you up against the plague, or World War II, or a major problem in time travel.”

But for Willis, it’s not all about fighting and struggling. Sometimes it’s about exploring the lighter side of life. She’s working on a comedy about Roswell, New Mexico, and the events surrounding the town’s fame. In 2016, she wrote Cross Talk, a romantic comedy about social media, 24-hour availability and telepathy. This fall, she published a collection of Christmas stories in A Lot Like Christmas.