It was ‘Fisayo Awolaja’s 23rd birthday. The 2018 UNC graduate was sitting in his room in Greeley, about to jump into the third semester of his master’s degree at the Colorado School of Public Health. He had a quiet birthday dinner planned.

Then his phone rang. The voice at the other end of the line belonged to a staff member with the NFL’s New Orleans Saints. 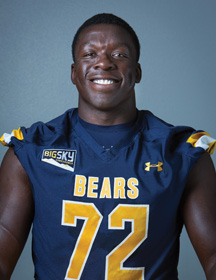 It was ‘Fisayo Awolaja’s 23rd birthday. The 2018 UNC graduate was sitting in his room in Greeley, about to jump into the third semester of his master’s degree at the Colorado School of Public Health. He had a quiet birthday dinner planned.

Then his phone rang. The voice at the other end of the line belonged to a staff member with the NFL’s New Orleans Saints.

And four hours later, he was on a plane headed to New Orleans.

Since then, he’s signed a contract with the Saints, learned the playbook and had his contract waived during cuts.

But, like most athletes and graduate students, Awolaja’s story started years earlier, as a kid growing up in Thornton, Colo., interested in science and excelling in basketball. His parents — both nurses — hadn’t wanted him to play football because of the risk of injury (although basketball still left him with a knee injury). So when he got to UNC and walked onto the football team the spring of his first year, he kept quiet — until he re-injured his knee and had to tell his family.

Eventually, they attended a game to support him, wearing shirts bearing their pride. But even as they accepted the fact that he was now a football player, and as he further developed his strength and speed, he struggled to learn the mental side of a new sport.

Fortunately, though, he had dedicated teammates and coaches, and he took on the challenge of learning whatever he could via Google, taking notes in a composition notebook. He studied film with his teammates and coaches. He applied the same mind that had gotten him into the McNair Scholars program to football.

That program, by the way, had offered him a chance to get onto a different type of field during his college experience — a field in the mountains west of Boulder, Colo., at the University of Colorado Mountain Research Station.

He spent one summer up in the mountains, kneeling by plots of wildflowers, the stalks ending in bursts of little yellow buds. He learned to sew pollen limitation bags, captured bees and spread pollen with a paintbrush. One day, he heard something behind him and turned to see a bull moose 15 feet away.

He discovered that the Rocky Mountain native Thermopsis divaricarpa was capable of self-reproduction, and he presented his findings at conferences across the country. Before that summer’s research experience, he had planned to go to medical school. But as he learned research techniques, he decided that he wanted research and the environment to be a central part of his career.

But he still had a football career to finish.

Despite the challenge of learning the game and handling an intense academic load, Awolaja worked his way up to playing in every game his final season at UNC. He went on to participate in UNC Pro Day, earning a Saints rookie mini-camp invite, then a vet mini-camp invite. At the Saints facilities in Louisiana, he ate lunch with Drew Brees, got playing tips from veteran offensive linemen, and showed off his speed in drills.

“The biggest thing for me is that, even in that environment, it’s not that those people were so far ahead of me that it was unobtainable to me,” he says.

Then came the phone call, the contract, the preseason participation, the waiver.

He still plans to complete his master’s in Public Health and go on to earn a Ph.D. in environmental engineering, where he’ll solve problems to improve people’s environments in ways that impact their health. In the meantime, he’s training in Denver, enjoying home-cooked meals at his family’s home in Thornton (and even cooking some Pinterest-sourced recipes for them).

And he keeps his phone on. Because football might not be done with him yet.