On a basic level, cosplay is people dressing up in costumes from pop culture. For some people (like me) it also means making the costumes.

Cosplay and online content creation is my full-time job now, so I spend time every single week either constructing costumes, shooting photos and filming videos in costume, or, once every two or three months, appearing at a convention or event in costume. My earnings include photo print and music sales, ad revenue, sponsorships and a number of other sources.

I had always been interested in creating and crafting. I learned to hand sew at a young age and used a sewing machine in elementary school. And I used to do text-based roleplaying and fan art and fan fiction, because my way of enjoying media was to put my hands on it and make something new. Once I learned that cosplay was a thing,
I was immediately hooked.

My passion isn’t so much for “playing the character” as it is for creating new works from my favorite media. My focus is on photos, video and music, most of which I create privately and then share online, rather than performing live.

I mostly pick characters that I love and identify with, although I admit that the costume design and styling of the character plays a big role in my choices, too. 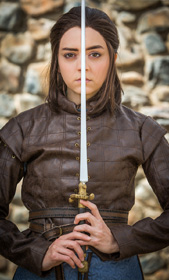 Known as “Ginny Di” in the cosplay community, DiGuiseppi is a full-time cosplayer. This March, she took time out to visit with students in Associate Professor Kristin Bovaird-Abbo’s MIND 288 Contemporary Arts Connections, “Worlds of J.R.R. Tolkien.” DiGuiseppi’s work can be found online at ginnydi.com.

My favorite cosplay is probably Arya (from “Game of Thrones”), just because I’ve cosplayed so many of her costumes (four) and I’ve been cosplaying her for so long, I just feel connected to her. But as strongly as I feel about Arya, I do get tired of being a “one trick pony” sometimes, so she isn’t always my go-to. Usually my favorite cosplay to wear is the most recent one I’ve finished, so right now that’s Officer Jenny from Pokémon.

My most challenging cosplay to date is probably Ciri, from the video game “The Witcher 3: Wild Hunt.” That costume has so many different pieces, and each is heavily detailed and distressed. I did so much decorative hand stitching on that costume, and then had to make it all look filthy and torn up. It’s also the biggest makeup challenge I’ve done, since she has some very heavy, specific eye makeup, freckles and a bunch of scarring.

It usually surprises people to hear that I make my own work. I think a lot of people just assume I’m a cosplay model at first. For those who already “get” cosplay, I think they’re most surprised by what a high percentage of my costumes are made from thrift store bedsheets and curtains! A lot of the business of cosplay is marketing, and marketing requires a ton of writing. I write blogs. I write social media posts. I write scripts for videos. Being able to communicate my ideas clearly and thoughtfully has been immensely helpful in building a brand for myself and reaching more people with my work.