UNC Leads with its People in Latest Marketing Push

While much of the university’s brand marketing continues to share distinguishing features and program offerings, billboards on I-25 outside Fort Collins, in downtown Greeley, at Denver International Airport, on a new website and elsewhere, are leading with faces.

They’re the faces of graduate and undergraduate students, faculty and other members of the campus community.

UNC is expanding its international
reach by partnering with Hong Bang
International University to deliver the Vietnam institution’s first master’s degree program in nursing. While UNC has established international partnerships with over 40 institutions on four continents, this is the university’s first program that will be offered on premises of a campus abroad.

UNC’s “Bear in Mind” podcasts, which
debuted in February, offer insights by
UNC faculty, staff and alumni on issues
of local or national importance. In the
initial episode, political science faculty
member Gregory Williams talked about
President Trump’s first few weeks in
office, his campaign promises and the
power of the U.S. presidency.

Work by UNC professors and an honored alumnus served as the foundation for the Bureau of Indian Education to unite 66 BIE-funded schools in New Mexico, Arizona and Utah.

History Professor Michael Welsh, Special Education Professor Harvey Rude and Northern Arizona University Associate Professor Joe Martin ’82 conducted a feasibility study to inform the integrated approach that resulted in the transfer of control of the schools from the BIE to the Navajo Nation.

Citing her role as a visionary, champion and leader within the field of educational interpreting for more than 20 years, the National Association of Interpreters in Education bestowed its inaugural award honoring leadership in the field to Leilani Johnson, director of UNC’s ASL and Interpreting Studies program. The award, named in Johnson’s honor, will be presented annually to an interpreter working in education that exemplifies the leadership qualities that Johnson has demonstrated during her career.

UNC is taking another big step in reducing its carbon footprint through a partnership with McKinstry, a national company with offices in 15 cities that focuses on energy and operation efficiency in existing and new buildings.

McKinstry audited 1.3 million square feet in 18 buildings on campus to reveal opportunities to implement energy and operational cost savings strategies with projected annual savings of more than $500,000 — measures that will reduce the school’s carbon footprint.

McKinstry also helped secure $286,000 in utility rebates to offset initial costs of the improvements. Energy and operational savings from the improvements over the next 15 years will pay for their $8.86 million cost. 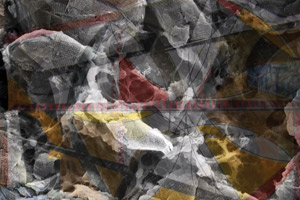 Professor's Artwork Headed to the Moon

School of Art and Design Professor Anna Ursyn’s computer-generated nano-art will be included in a time capsule aboard a lunar rover scheduled to be delivered to the moon later this year. Ursyn’s work, titled “Swarm,” (pictured above) will be among the thousands of nanoformatted examples of art, architecture, design, music, drama, ballet and poetry included in the Moon Arts Project.

The Moon Arts rover is scheduled to be part of the payload on a SpaceX rocket that will be launched from NASA’s Kennedy Space Center in late-2017.

According to project managers, the Space Ark isn’t intended to show aliens what life on Earth is like, but rather for future generations of Earth’s inhabitants, since the time capsule could last for millions of years given the lack of atmosphere on the moon.

UNC Agrees with NCAA on Results of Investigation

The National Collegiate Athletic Association’s investigation of UNC’s men’s basketball program — started in spring 2016 after UNC became aware of and self-reported potential violations by the program’s previous coaching staff — concluded in February when the NCAA’s Enforcement Division released its official Notice of Allegations about multiple instances of academic misconduct. UNC
expects to hear this fall if its self-imposed penalties, which include financial penalties and restrictions on recruitment and financial aid awards for student-athletes in the program, are acceptable to the NCAA’s Committee on Infractions.