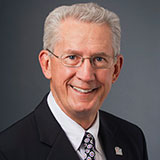 Jordan has served on numerous not for profit boards including Chairing the NCAA Division II Council of Presidents and Chairing the American Association of State Colleges and Universities.

Jordans lives in Lafayette, Colorado with his wife Ruth. They have three children and six grandchildren.