Get top-notch professional training for a university faculty position.

UNC’s Doctor of Arts in Music with emphasis in Conducting provides comprehensive preparation for a career as a college-level educator and/or leader of a musical performing ensemble. You’ll gain exceptional professional training from a widely acclaimed music school, building deep academic expertise and well-rounded skills as a teacher, scholar, and musical leader.

As a doctoral student at UNC’s School of Music, you’ll have the chance to work with dedicated faculty who are leaders in their respective fields. Our faculty excel as teachers and professional mentors, offering personalized guidance to help you get the most out of your doctoral training. You’ll also get the benefit of UNC’s vibrant musical community, which includes more than 400 diverse, highly committed musicians. The School of Music is accredited by the National Association of Schools of Music.

D.A. in Music with Emphasis in Conducting

The D.A. in Music consists of 67 to 71 credit hours of study. It includes practical training in college-level teaching, including coursework in pedagogy and extensive time on the podium. The program culminates in a doctoral dissertation based on your original scholarship, along with recitals.

Your Future in Conducting

Graduates from UNC’s Doctor of Arts in Music program have an impressive track record of professional success. Our alumni hold faculty appointments at music schools across the country, with outstanding achievements in scholarship, pedagogy and musical performance. Hiring committees respect the quality of UNC’s music programs, so you’ll enter the job market with first-rate training and a highly regarded credential.

Consider UNC’s Music Conducting DA if you want to: 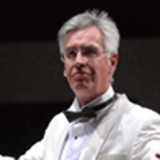 UNC’s Symphony Orchestra has been named DownBeat Magazine’s “Best U.S. College Orchestra” 10 times. All 10 of those prestigious awards came under the direction of London-born maestro Russell Guyver. During the same period, Dr. Guyver twice led the orchestra to selection for the prestigious International Cycle of University Orchestras in Zaragoza, Spain.

A graduate of London’s Guildhall School of Music, Dr. Guyver relocated to the United States in the 1980s for his doctoral studies. In the years since, he has launched a successful chamber group (String Orchestra of the Rockies), won an Emmy Award for his score of a PBS docudrama about the painter Sydney Lawrence, and composed a one-act opera called Opera(tion) World Peace.

“One of my goals as a conductor is that we peak out at a concert,” says Dr. Guyver. “That we’ve rehearsed sufficiently, without becoming tired of the music.” Given the UNC Symphony Orchestra’s track record of honors and awards, Dr. Guyver seems to have a good knack for eliciting peak performances.

As a D.A. student at UNC’s School of Music, you’ll have opportunities to work with first-rate ensembles in all genres. Our musical groups have won major awards and performed in high-profile venues throughout the United States and the world. You’ll work with serious, dedicated musicians striving to excel in their craft.