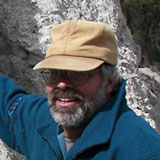 Dr. Evanoff studies the middle Cenozoic sedimentary rocks of the Great Plains and Rocky Mountains.  His specialty is the stratigraphy, sedimentology, and paleontology of distal volcaniclastic sequences such as the White River Group and the Bridger Formation.  He has worked in Badlands National Park in South Dakota as well as on the deposits of Florissant Fossil Beds National Monument.  He has a broad range of interests ranging from Cenozoic terrestrial land snail and vertebrate faunas to the distribution and origin of Cenozoic volcanic ash deposits, and from the changes of Rocky Mountain and Great Plains landscapes during the Cenozoic to the history of geological studies in the Rocky Mountains and Great Plains.  He has also studied the Jurassic Morrison Formation of Dinosaur National Monument and the Garden Park area of central Colorado.

He is a research associate at the University of Colorado Museum in Boulder and the Denver Museum of Nature and Science.  He also teaches adult education courses in paleontology and geology at the Denver Museum.  Before coming to UNC, he taught geology and paleontology at the University of Colorado over a span of 23 years.  He is a past-president of the Colorado Scientific Society (CSS), and has helped organize two symposia for CSS.  He has also been active in presenting talks and organizing topic sessions for the Geological Society of America, the Society of Vertebrate Paleontologist, the Paleontological Society, and the Western Interior Paleontological Society.

Evanoff, E., Gregory-Wodzicki, K.M., and Johnson, K.R., eds., 2001, Fossil Flora and Stratigraphy of the Florissant Formation, Colorado:  Proceedings of the Denver Museum of Nature and Science, Series 4, no. 1, 218 p.