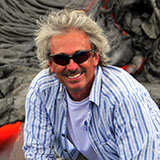 His research focuses on the surfaces of active and older lava flows and how they are influenced by the behavior of a volcano. Dr. Anderson has published more than 30 peer-reviewed articles, including two in Nature, and he has received several NSF grants to support his research. He has studied active volcanoes in more than a dozen countries, and has been supported by the NSF NASA to study lava flows on Earth, Mars and Venus.  He enjoys combining his love of volcanoes with education by participating in radio and television spots that feature his work, including the BBC’s Volcano Live show that was viewed by several million in Europe in 2012. He has held university leadership roles, serving as Chair of the Science Department at Black Hills State University and the Director of the Mathematics and Science Teaching Institute at the University of Northern Colorado.

Dr. Anderson conducts research in two different but complimentary areas. His primary research interests focus on what the surfaces of active and older lava flows can tell us about the behaviors of the volcanoes that produce them (See more about his work: Volcanoes beyond Earth). He typically involves both graduate and undergraduate students in his research, bringing them to research sites in Hawaii, Peru, Chile, and the western United States. His second area of research centers on relationships between teaching and learning in introductory college geoscience courses. He is well-known for his work on geologic misconceptions, with this work leading to the publication of the most widely-used concept test in the Earth sciences called the Geoscience Concept Inventory (Libarkin and Anderson, 2003).