Between WWI and WWII, enrollment in the program grew steadily as did the school’s enrollment. The college began to offer tuition-free national defense courses through its engineering program and made improvements to its airfield and ROTC facilities. On October 22, 1946, General of the Armies Dwight D. Eisenhower, Chief of Staff, signed General Order No. 124. This order created separate entities for Army and Air ROTC units. CSU, then named Colorado A&M, was among the first schools to have an Air ROTC unit. In 1947 the newly created independent U.S. Air Force assumed responsibility for the Air ROTC unit and Detachment 90, AFROTC was born. In the decades since its inception, AFROTC has become an integral part of CSU. The 2017-2018 school year marked 100 years of Army ROTC and 70 years of Air Force ROTC at CSU.  Both programs have produced over 5000 commissioned officers.

The University of Northern Colorado had its own Air Force ROTC program, Detachment 100, up until 1987 when a decrease in enrollment resulted in a merger with Detachment 90.

The first photo was likely taken around 1890, before the cadets were required to have a military uniform. This may be the oldest known photo showing military training at Colorado State University. 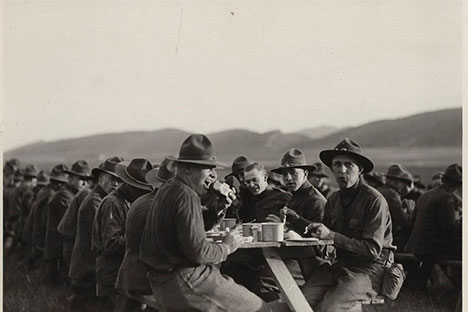 The second image depicts cadets at a training encampment in the spring of 1921. There they will learn and practice many of the skills necessary to be a good officer in the field.  Field Training Exercises (FTX) such as this are re-emerging as a vital part of leadership training at Detachment 90. 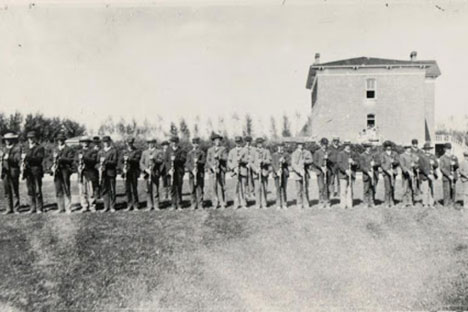 This image is of the military science building. Built to replace the wooden military buildings destroyed several months earlier by a fire, it was originally called the “R.O.T.C. Headquarters and Classroom Building.”  Designed by architect Eugene Groves, its construction gave the department its new main building that was part of a network of military facilities, such a storage sheds, pistol range, stables, and garages, which over the years emerged south of University Avenue.  During the late 1950s many of these structures were torn down or moved to make way for campus modernization. We still use the same building today, with some technological improvements (and a newer second floor). 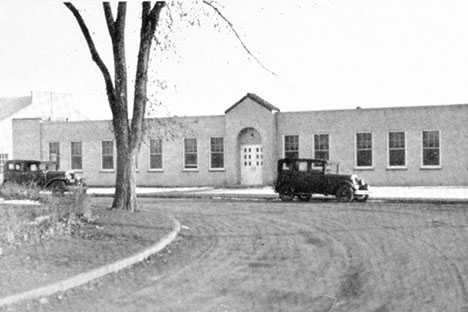