This January, senior Music Education major Sam Hesch traveled with UNC’s Jazz Lab I and a number of UNC faculty to New York City to compete in the inaugural Jack Rudin Jazz Championship at the Lincoln Center.

Hesch, who is in his fourth year with Lab I, was one of four UNC musicians to bring home individual recognition — Outstanding Alto Saxophone — bestowed by jazz legend Wynton Marsalis himself. The musicians played jazz at 10 a.m. in the famed Rose Theatre, attended educational sessions with top artists, networked with peers and directors from other universities, and experienced the Big Apple. Here, Hesch reflects on his experience.

I started playing saxophone in elementary school. I had really great teachers. And in middle school, my band teacher was super awesome — I really loved him. And then I got to high school and had another great music teacher. And I realized, "You know what, I love doing this." And it wouldn't have happened if it wasn't for the great teachers I've had. So I want to give that back for other kids. 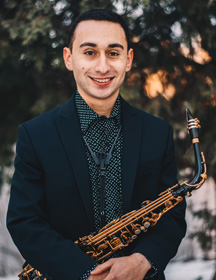 Zach Rich, who's our lead trombone, wrote a tune for the competition. There was only one other group that played an original composition (written specifically for the competition). So that was pretty unique that we were able to do that.

It’s cool to play things that are written by people who are great at writing, but it's another thing to play tunes written by your friends and peers and colleagues. You have more respect for them. You can really encourage them. It's also a great learning experience for student composers. And I know (director of Jazz Studies) Dana Landry loves student compositions. It's a really rewarding experience because Lab I is really good. We can basically sight read the charts so composers get a really good, accurate representation of what a piece is supposed to sound like, right away.

The week before New York, we had rehearsals every night. We were just working things out and making sure things were in tip-top shape. On Thursday night, we had a send-off concert at UNC for anyone who wanted to hear it where we played everything we were going to play in New York.

Friday we got to New York, and on Saturday morning, we had a rehearsal with some members of the Jazz at Lincoln Center Orchestra, which is really, really cool because these guys are some of the best musicians in the world. Our clinician was Ted Nash, who actually plays, ironically enough, second alto in the Jazz Lincoln Center Orchestra, which is what I play in Lab I. He was a great resource. And after that we had a Q and A with this guy named Wynton Marsalis. He's basically the face of jazz in United States.

At the Q and A, one kid came up and asked, “So I'm thinking about moving to New York and trying to make a living here being a musician. What do you think about that?” And Wynton Marsalis was like, "Where are you from?" He's like, "Texas." Wynton Marsalis said, "Well, you know New York is a great place and we have a great music scene here, but we need artists everywhere. It's important for all of us to build the community of musicians and artists around the world, not just in one place." That spoke to me.

After all the bands played, Wynton Marsalis got up on the microphone and announced the finalists. I was slouched in my chair, and I was not expecting him to call my name. And he's like, "Outstanding Alto Sax, Sam Hesch." And I was like, "What! You've got to be kidding me." I got to shake his hand and take a picture. I'll never forget that experience. It was unbelievable.