On a sandy, dry road in Weld County, Colorado, UNC graduate student Neil Balchan casually pulls a red, 5-gallon bucket from his car and puts it down a few feet away. Then, he dips a long pole into the bucket and lifts out a rattlesnake. He walks several yards down the road, the snake dangling from the pole, then gently places it on the ground. The snake has spent several days at a UNC lab, and now it’s back where it was found. 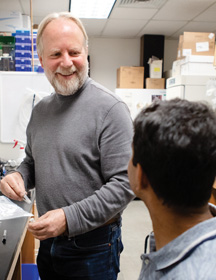 He’s been fascinated by snakes and other reptiles since he could remember, and when it came time to chose a graduate school, he knew he wanted to work with Mackessy, a renowned snake-venom expert.

“Dr. Mackessy is an authority in this field, and he’s done incredible work in both this and several other research areas through his career,” Balchan says. “Having a faculty member like that advise a research project is incredibly valuable.”

Balchan is particularly interested in understanding why some rodents seem resistant to rattlesnake venom.

Most often, when a rattlesnake bites and injects venom into a rodent, the rodent dies and becomes a meal for the snake; however, Mackessy and Balchan are seeing some populations of rodents that “detoxify the venom.”

Balchan studies numerous species of rodents as well as rattlesnakes and their venoms to better understand why and how certain rodents are venom resistant.

“Rodent blood is complex beyond regular blood in the sense that some rodents can inhibit rattlesnake venom function,” Balchan says. “The rodents here in northern Colorado may have some level of resistance, or even immunity, to local rattlesnakes, so we’re trying to pull that blood apart and understand what’s happening at the protein level that could be resulting in that.”

And the key to that resistance could have a significant impact on human lives where antivenins are in short supply.

According to the World Health Organization, “Around 81,000 to 138,000 people die each year because of snake bites, and around three times as many amputations and other permanent disabilities are caused by snakebites annually.”

Balchan hopes his research will help lower those numbers. “This is something we tend to ignore or hear very little about, and by studying venoms and how venom varies, we can hopefully mitigate these numbers,” he says.

Shortages in antivenins are due to cost and the different types of venom. According to Mackessy, one vial of antivenin costs anywhere from $2,500 to $10,000. A typical bite usually requires a minimum of four to 10 vials. He’s even heard of cases where 40 to 60 vials of antivenin have been used due to life-threatening reactions.

Costs aside, there are differences in venoms. If a person is bitten and envenomated by an African cobra, antivenin made for a rattlesnake in the U.S. wouldn’t help because of the uniqueness of compounds found in venoms.

“In the U.S., we primarily have one antivenin, CroFab, that’s been in use for a number of years now,” Mackessy says. “It’s highly purified and effective in treating rattlesnake and other viper bites in this country.”

For their research, Balchan and Mackessy capture snakes in their natural habitats and bring them to the lab at UNC. They collect venom and blood for any potential genetic work in the future, then return to the spot where the snake was collected and release it.

“If we can collect an animal in the wild and interact with it to collect genetic information and venom, then we’ve got a responsibility to put that animal back where we took it from,” Balchan says.

“These animals are important components of ecosystems,” Mackessy says. “There’s a tendency for people to want to kill anything that they don’t understand, and rattlesnakes are an animal that falls into that camp; however, if you kill this animal, you may also be eliminating the source of a drug that could someday save your life.”

Mackessy says Balchan has contributed greatly to the work being done at UNC. “Neil has been working in the lab for about a year and a half, and basically hit the ground running,” Mackessy says. “The very first day he was here, he was out in the field doing work.”

Balchan’s long-term plans involve a research-focused career as a professor or another area where he can spend his worklife “playing with snakes, for a lack of better terms.”

But wherever life takes him, he plans to keep in contact with Mackessy.