As campus closed in March, it also brought research projects to a halt. We spoke with three UNC researchers about their work and the impact of the COVID-19 closures.

Neil Balchan, a graduate student from Manitoba, Canada, has been working with Professor of Biological Sciences Steve Mackessy, Ph.D., for about a year and a half.

Balchan’s research focuses on understanding why some rodents seem resistant to rattlesnake venom.

Most often, when a rattlesnake bites and injects venom into a rodent, the rodent dies. Mackessy and Balchan are seeing some populations of rodents that “detoxify the venom,” which is good for the rodent that lives to tell the tale and disappointing for the snake.

“The rodents in northern Colorado may have some level of resistance, or even immunity, to local rattlesnakes, so we’re trying to understand what’s happening at the protein level that could be resulting in that,” Balchan says.

The key to that resistance could have a significant impact on human lives where antivenins are in short supply.

Balchan says more than 100,000 people die due to snake bites annually. “By studying venoms and how venom varies, we can hopefully mitigate these numbers,” he says.

Snake venom research at UNC is one of many areas affected by the coronavirus. “(It) has caused major problems for research since the lab is essentially off-limits,” says Mackessy. “I have lots of writing to attend to, so I hope to make progress on that, but this will put lab work on hold.”

Watch for Balchan’s story in the Fall/Winter issue of UNC Magazine.

One of the unique qualities of UNC Cancer Rehabilitation Institute (UNCCRI) work has long been the connections between UNCCRI patients, students, interns and research, and all three have been impacted by COVID-19 closures.

Research at the institute has shown that exercise can have a tremendous positive impact on a cancer patient, their recovery and quality of life, and Reid Hayward, Ph.D., professor of Sport and Exercise Science and the director of UNCCRI, feels a level of frustration knowing that their patients aren’t able to take advantage of that. 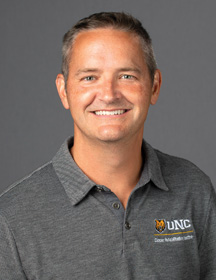 “We’ve got a lot of data to show the benefits of exercise for these individuals, and so we feel like they’re not getting everything they need. Obviously, the risks right now are outweighing the benefits, but there is a benefit for them,” he says.

“The students at the Cancer Rehab institute are very invested in cancer survivors, the field of cancer rehab, exercise oncology. They’re all very passionate about it, so for them, it’s very disappointing,” Hayward says.

“I’ve got a Ph.D. student who is looking at the effects of our program on a specific immune variable. He’s got to do a complete start over when we get back, and we’ll have to adjust things like timelines and requirements for the number of subjects that he’s going to have.”

As of June 1, students are able to work in the lab and are conducting new studies, but students doing clinical work are still sidelined, waiting for the institute to reopen.

For Rick Adams, Ph.D., professor of Biology, the impact of COVID-19 has been felt not only in the lab, but in terms of the way bats are viewed globally.

“Regarding the recent speculation surrounding the sourcing of COVID-19, bats were almost immediately stated to be the likely reservoir. The truth is that the origin of COVID-19 remains unknown because all animals carry coronavirus loads and very few species have been sampled,” says Adams.

“A study published in April in the Academy of Science’s journal PNAS compared bats to seven other orders of mammals and found no evidence that bats were a more likely source of disease transmission to humans than most other groups.”

Adams points to a recent letter published in Science by a Chinese researcher that states, “The reputation of bats as virus carriers has led to extreme suggestions of mass slaughter to protect public health.”

Adams, who’s been researching bats for 30 years, has traveled with students over the years to work with bats in Colorado and throughout the world.

He and a Ph.D. student were scheduled to begin fieldwork in June however, the U.S. Fish and Wildlife Service strongly suggests that no handling of bats occurs this summer due to the potential of researchers passing COVID-19 to North American bat populations (reverse-zoonosis).

As a result, the Colorado Parks and Wildlife Department rescinded all bat capturing permits this year, though Adams says they will be able to do sonar-capture studies.

“Our fieldwork has been aided by devices that can record the ultrasonic echolocation calls of bats, which allows us to determine species presence/absence. These devices allow us to work alone and download the recordings for analysis.”