The stage at Union Colony Civic Center in Greeley may have been quieted by the pandemic in 2020, but in November 2021, students, alumni and the Greeley Philharmonic Orchestra came together for a heartfelt performance honoring the career of Galen Darrough, D.M.A.  Photo by Woody Myers

When UNC’s Combined Chorus returned to the stage to perform with the Greeley Philharmonic this past November, it was a long-awaited opportunity to honor choral director Galen Darrough — and it gave 85 alumni a chance to come back to Greeley and perform under his baton one more time.

Each year, the UNC Combined Chorus has capped off the academic year with an April performance with the Greeley Philharmonic Orchestra (GPO), and for many years they’ve done so under the direction of Galen Darrough, D.M.A., UNC’s emeritus director of Choral Studies.

The April 2020 concert was to have been Darrough’s last time conducting the Combined Chorus at the GPO, after his retirement from UNC in January 2020.

But when COVID-19 quieted the stage at the Union Colony Civic Center in March of 2020, the plans for the April Combined Chorus were cancelled. 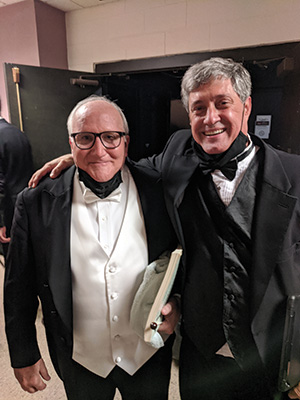 Darrough and Stadler take a moment to celebrate a night that capped off 30 years of performances.

“I thought, well, I’m kind of slipping out the back door of retirement,” Darrough recalls.

But that door wasn’t ready to close just yet.

Nick Kenny ’16, chief executive officer of the Greeley Philharmonic, said that as he and his team were planning for the 2021 season, they wanted to hold true to presenting the UNC Combined Chorus, and they wanted to bring Darrough back in recognition of his work. They moved the concert to Nov. 13, 2021, to do so.

“Very rarely do any music students get to perform with a professional orchestra. For UNC students to get to do it almost on an annual basis, is just really special,” Kenny says. “We had wanted to recognize Galen’s three decades of service and partnerships with GPO, but then the pandemic hit, so we had to kind of restructure this concert.”

They began by changing the pieces the choir and orchestra would perform. Originally, the April 2020 concert was to have performed Ralph Vaughn Williams’ Dona Nobis Pacem.

Kenny and his team turned instead to the Brahms Requiem. Requiems are generally a funeral mass for the dead, but the Brahms Requiem is different. “This German requiem is more focused on those who are bearing the suffering,” Kenny says. “We thought that’s a very powerful message for what we’re going through with the pandemic, and that it would be appropriate to perform that requiem.”

They approached Darrough with the suggestion, and he agreed.

“The theme of redemption, of comfort for the living for those who have departed, for those who are left behind, is really the general theme of the Brahms Requiem. It makes it such a beautiful, uplifting (piece). It’s just a life-changing piece,” he said. As he spoke with Kenny, Darrough asked if he could conduct the orchestra for some of the Hungarian dances.

“To my delight, they consented,” he says. He would conduct the entire concert.

With the program settled, Darrough knew that because of the pandemic they wouldn’t have the 150 to 160 students on stage as they have in the past.

“We usually put up enough numbers to pull off a major work, but owing to COVID, there were only about 95 students,” Darrough says. “So, I asked my colleague, Dr. Jill Burgett, ‘How about if we throw it open to alums?’”

Burgett liked the idea and Darrough put the dates on Facebook. “I would say in two days, we had a choir,” he says.

In the end, 85 alumni from across the country returned to Greeley to perform with Darrough.

“It wasn’t even a question of whether or not to go, we were invited,” says Hasman. “Dr. Darrough, Brahms… not a hard sell!”

Hasman had performed the Brahm’s Requiem with Darrough while she was a student at UNC. “I remember feeling so moved during that performance that I teared up several times. Afterwards Dr. Darrough saw me and my wet eyes and gave me a big hug. I always appreciated that he recognized how moved I was and that it meant something to me. It’s just one of those memories I cherish, so you can imagine how I felt when he announced that I could come sing the same piece under his baton.”

Stadler, who is a vehicle fleet manager at UNC, has been a member of UNC ensembles since 1992 and also sings with the Greeley Chorale. “How could I not want to sing once more with the man I’ve followed for nearly 30 years,” he asked.

The word “beloved” often comes up when alumni speak about Darrough. When asked why students and alumni felt such affection for him, Stadler said, “It has everything to do with having a good heart and a passion for sharing, delivered with such kindness and gentleness. He’s just the kind of person who everyone wants to be around. I guess we can actually thank COVID for granting the opportunity to end with an even bigger bang than we otherwise would have. To bring so many former students ‘back home’ just made it that much more wondrous,” said Stadler.

Everyone on stage, including orchestral members who weren’t playing a wind instrument, had to be masked.

“It muffles it about 15%,” says Darrough. “It’s not optimal and the singers have to over-articulate the text, but people love to sing and they’re not going to let something like COVID stop them.”

“The vocal demands on the students, particularly in two of the larger movements, are extreme,” Darrough said. “I think it’s one of the most taxing pieces. The choir never sits down, there’s no need to put platforms or chairs in there.”

Hasman agreed. “My feet and knees and arms did not remember how it was to stand on that hot stage holding up the music for so long. It was so grueling!”

The performance’s emotional impact was felt on both sides of the baton.

“There was just a tremendous outpouring of love,” says Darrough. “There’s a great poem by Robert Frost called  ‘Fire and Ice,’” says Darrough. “I talk (to my students) about how your heart has to be on fire, but your mind has to be on ice in a situation like that. That’s the way that I had to do it, because there were a couple of times where I became really quite emotionally touched and I had to back off a little bit for the sake of clarity and technique and wanting to be a good conductor. It was really a combination of an emotional and an artistic high point in my life.”  UNC