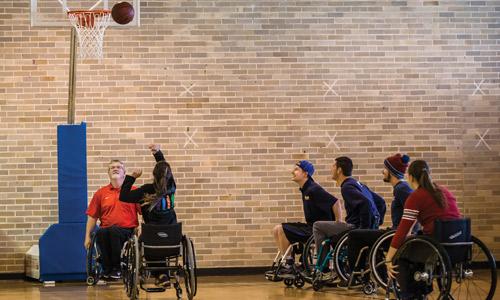 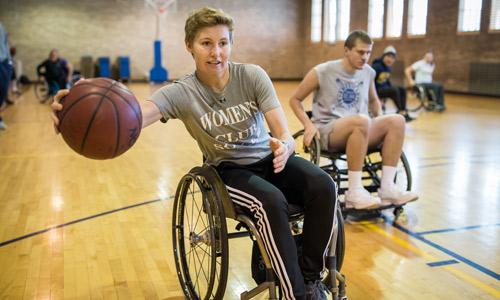 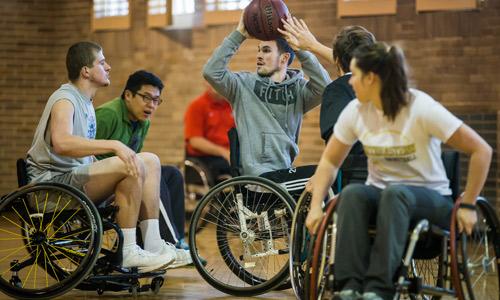 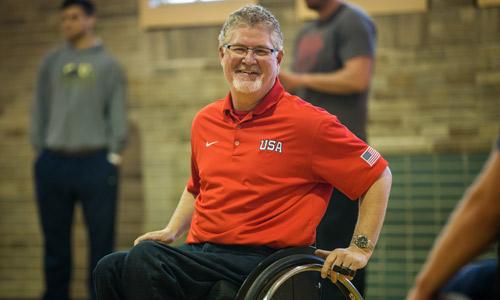 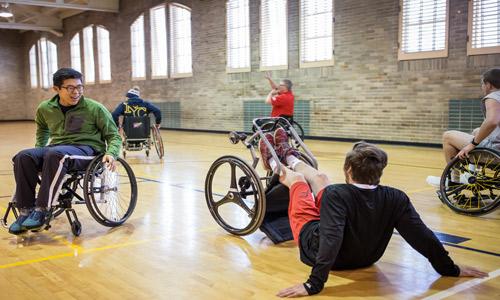 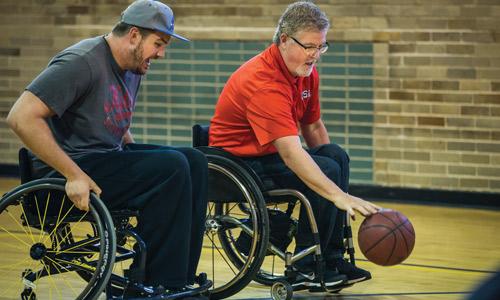 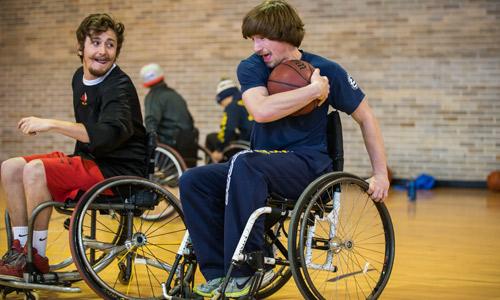 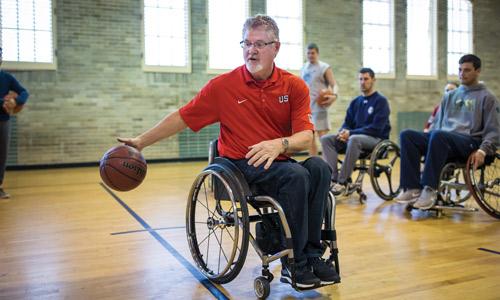 On an early Tuesday morning, Gunter 1150 looks like pretty much any other college classroom. A few posters hang on the walls. Students in jeans, sweats and athletic gear fill the desks for a required Physical Education class.

After a student presentation, the professor tells his students to get up and stretch before his lecture on the Paralympics. Then two things happen: He wheels over to a table at the front of the classroom, and he pulls out a bronze medal.

Meet Scott Douglas, known to his students as Dr. D. He’s program coordinator of UNC’s sports coaching program and teaches in the School of Sport and Exercise Science. He’s what you’d expect from a guy who teaches college students to be physical education teachers and coaches: friendly, open, connected to his students, occasionally throwing a little shade at a rival team.

The bronze medal itself, won in wheelchair tennis doubles at the 2000 Paralympic Games in Sydney, isn’t as much a cause for pride as is the story behind it. Scott uses a wheelchair, but he sure isn’t confined to it. The medal and the chair are afterthoughts in his daily life. Whether explicitly or not, though, they’re emblematic of Scott and the path he’s taking at UNC to prepare the next generation of physical educators and coaches.

It happened in 1982 when Scott was 18, skimming down the slopes at Snowbird Ski Resort in Utah with a friend. He was a freshman at the University of Utah, and after finishing a focused high school baseball and basketball career, he’d become a little unanchored.

He hit an icy patch, fell, and slid on his back, headfirst, down a trail called Bassackwards. Then, bam — like being hit by a linebacker — he rammed into an unpadded maintenance ladder on a lift tower. He immediately tried to push himself up to standing, but he was down for good. His back was broken. The injury to his spinal cord would require lifetime use of a wheelchair.

He’d been dating a fellow student and co-worker, Teresa, for two months. Teresa’s father worked with people with disabilities, so the injury didn’t faze her. “I knew he was still the same person,” she says.

As for Scott, he’ll tell you the accident woke him up. He started focusing again. Teresa refused to baby him. Sixteen months after the accident, they got married. They moved into a cheap basement apartment near campus, like any young couple might, as she worked and he finished his degree. The first time Scott picked up a basketball again, he was still in a full-body brace.

“I couldn’t even reach the net with my shot because I had gotten so weak from being in the rehabilitation hospital,” he says.

He kept playing. He got strong again. He competed on the local wheelchair basketball team and played in tournaments throughout the West, and he started dabbling in wheelchair tennis. He hit the court with athletes who had lived with impairments for years. They taught him how to jump a curb and dive into a pool and, if a hotel fire alarm went off, how to bump down nine flights of stairs.

“They don’t teach that in rehab,” Scott says.

Sports would eventually lead the Douglases to Birmingham, Ala., where their son Connor was born in 1993. Scott worked at a rehabilitation hospital with an adapted sports program, called the Lakeshore Foundation, which would later become a U.S. Olympic and Paralympic Training Site during his tenure. As the director of athletics, he could train during his workday. With some expert coaching, his tennis ranking climbed to sixth in the world.

Wheelchair tennis has a similar rhythm to standing tennis. The time between groundstrokes is slightly longer — players are allowed to give the ball a second bounce — but the extra time is occupied by a mesmerizing wheeled version of a standing player’s anticipatory shuffle.

The wheelchair, Scott says, is just another piece of athletic equipment.

Scott played in the Open division with the top players, even before he had worked his way up to that level.

“I didn’t care,” he says. “I wanted to play the best guys. And even though I got my ass kicked, I think I learned more from losing than if I would’ve played weaker players and maybe won the tournament.”

His sponsors included Oakley and Prince tennis, as well as a wheelchair manufacturer that once overnighted a custom chair to Switzerland when his arrived broken. The sponsorships were an early victory for recognizing impaired athletes as athletes. As Teresa says, rights for the disabled can be seen as part of a long progression of equal rights for all marginalized groups.

In 1992, 1996 and 2000, Scott competed in the Paralympics in tennis, earning bronze in Sydney with his doubles partner.

Scott’s son, Connor — who never needed a stroller as a kid because he could always hitch a ride on his dad’s lap — didn’t know that his dad was different until he got older.

“I just knew him as dad,” Connor says. Then he noticed adults looking at his dad funny. Other kids thought Scott’s athleticism and wheelchair were cool. Young kids, Scott says, tend to be more open-minded. So he chose to teach future teachers and coaches: They can impact kids while they’re still open-minded, and those kids can grow up to be unafraid and accepting of disability. 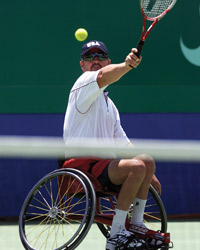 In his classes, Douglas applies what he’s learned as an elite wheelchair athlete. That includes his experience, left, in the bronze-medal doubles match of the Sydney 2000 Paralympic Games.

Snapshot of a champion

1982 – Douglas, then 18, breaks his back — injuring his spinal cord at the L1 vertebra — while skiing in Utah.

1994 – Douglas becomes the sixth-ranked tennis player in the world after training at what is now a U.S. Olympic and Paralympic Training Site. He reaches No. 1 in the world in doubles in 1998.

2000 – Douglas wins the bronze medal in wheelchair tennis doubles at the 2000 Paralympic Games in Sydney. He also competed in the 1992 and 1996 Games.

2008 – At age 44, Douglas joins The University of Alabama’s wheelchair basketball team while earning a doctorate in human performance and sport pedagogy.

2012 – Douglas arrives at UNC, where he teaches and does research in physical education teacher education and sports coaching.

To further connect and engage with his students, Scott shares stories from his time as a professional athlete.

For example, he tells them about the time he traveled to Greece in a diplomatic role as the Paralympics assistant chef de mission in 2004. America was at war with Iraq, and tensions were high. The U.S. Olympic Committee chief security officer wanted Scott to wear a bulletproof vest during the opening ceremony in case snipers rimmed the stadium and shot at the American flag.

Scott didn’t wear the vest, but he did trade gifts with other diplomats, including his counterparts from Iran.

“The sport and the games transcended that,” he says.

After Scott retired from para-sport competition, he returned to school to become a high school teacher and basketball coach. Teresa had earned her teaching degree when Connor was in elementary school, and partly inspired by her, Scott earned his M.Ed. at the University of Montevallo in Alabama. He then received a graduate teaching assistantship and enrolled at the University of Alabama to pursue a doctorate in human performance and sport pedagogy. He came out of retirement to start for Alabama’s wheelchair basketball team, using three years of student-athlete eligibility and earning Academic All-American status as a 46-year-old before graduating in 2011.

After spending a year as a visiting professor in Texas, a love for the healthy Colorado lifestyle and a job offer at a school renowned for its teaching brought him to UNC in 2012.

Mark Smith, Ph.D., now the associate dean of UNC’s College of Natural and Health Sciences, was the chair of Scott’s hiring committee. Smith says that Scott’s wheelchair gives him authenticity in the eyes of the students, starting on the first day of class.

A student might wonder how to interact with a professor in a wheelchair, Smith says. “Then after 10 minutes, they’re like, ‘The same as you would interact with any other professor.’”
Scott’s experience in Paralympic sport also lends authenticity to his research. A member of the Paralympic Research and Sports Science Consortium, he helps facilitate Paralympic-related research, and presents his own research on Paralympic and adaptive sports and coaching at conferences around the world. “It’s an understudied — and it’s an underrepresented — group,” says Smith.

Often, wheelchair athletes are coached by standing coaches who take what they’ve learned in standing sports and apply that to adapted sport. At the 2000 Paralympics, Scott says, his doubles partner missed warmups before a semifinal match that sent them to the bronze medal match instead of going for the gold. What would have happened had their coach been better trained in sports psychology and mediated any frustrations before the match? Scott will never know, but he’s determined that his research and teaching will better prepare para-sport coaches.

Scott dreams of starting and coaching an intercollegiate wheelchair basketball team at UNC. For now, he focuses on building understanding and challenging preconceptions with future teachers and coaches. He tells (and shows) his students that the kids with disabilities they’ll teach and coach can fully participate in sports — just like he can.

For one study, he and fellow faculty member Jennifer Krause, Ph.D., had students write down what they thought about disability. Then they sent members of the class to a Denver Nuggets or a Colorado Avalanche game. Half the students went in wheelchairs, paired with a standing companion. The students came back with all sorts of stories that changed their perspectives: Someone couldn’t reach the ketchup at concessions. Someone else struggled in the accessible bathroom stall. Later, the students reflected on both how the experience changed their perception of disability and how it affected them as future teachers of students with impairments.

Scott’s Teaching Diverse Populations class helps students learn to creatively adapt physical activity to diverse groups. It’s intensely practical: Only half of the class days are spent in the classroom in Gunter. The other half take place in the gymnasium, where Scott might pull out the sponsor-provided wheelchairs he kept from his playing days — plus two bought by UNC — so students can try playing wheelchair sports for themselves.

The experience provides lessons no lecture can replicate. “When you’re actually in a competitive situation, you don’t realize how hard it is to actually get up and down the court,” says Karli Jelden, a UNC pole vaulter and physical education major who played wheelchair football in Scott’s class.

Scott occasionally drops by other classes where students are practicing teaching to their peers, Jelden says, and he’ll act like he’s a student. It forces the future coaches and PE teachers to think on their feet.

“I think that’s what makes you a good teacher,” she says.

That, and having real empathy for your students, like the kind that Scott teaches. The energy and insight he brings to the classroom, and the rapport that he builds with his students, sets a high bar for future teachers. And so, while the classroom in Gunter might look like your average college classroom, it’s so much more.

As class ends, Scott calls out like a coach calling to his players.