Leaders have a great impact on the tone, culture, goals and vision of an organization. For each of the colleges and academic areas at UNC, the top leader is the dean, reporting to Provost Mark Anderson. Amid 2020’s uncertainty, three new deans joined the ranks at UNC.

Each of them was drawn to UNC by different elements of the colleges, with varied backgrounds at public and private institutions across the country. They want to see UNC offering more unique, integrated, transdisciplinary programs; they plan to support undergraduate and graduate research; and they’re working together to support UNC’s students and mission as a whole.

Here, we introduce these three leaders and share their vision for UNC’s future.

SherRhonda (Sher) Gibbs, Ph.D., had a clear vision for UNC by the time she arrived on campus this summer from the University of Southern Mississippi’s School of Management. She’d been brainstorming what she would do as a college dean for the previous three or four years.

“My vision for MCB is to continue with building leaders from the ground up and positioning the college to be the leading business school in immersive business education and career preparation,” Gibbs says.

In light of that vision, today at MCB, cross-campus collaborations are in the works to create programs in cybersecurity, cybercrime, data analytics and data science. Gibbs is leading a collaborative approach with industry personnel to create curricula that prepares students with the skills employers are looking for. She plans to enhance UNC’s online offerings, add an entrepreneurship concentration, form a student success center and start a student business incubator. She’ll require students to take courses in financial literacy, and a special topics course on app development and economy will be offered in the spring. She has her eye on innovation, with the support of UNC President Andy Feinstein. 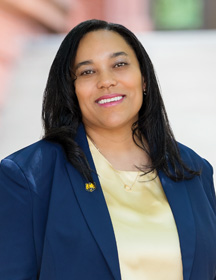 Alumni! Do you want to get involved or give back to MCB?
Gibbs invites you to reach out to her: SherRhonda.Gibbs@unco.edu

Before she dreamed of becoming a dean, Gibbs started as a mass communications major at Grambling State University in her native state of Louisiana. She remembers having one particularly harsh English professor who helped hone her written communication skills.

“People were terrified to turn in assignments because she would just rip it apart. It had to be perfect.” Gibbs says.

That professor told the class that if they were there to be like Oprah Winfrey, “you can forget about it,” Gibbs remembers. “She said, ‘If you want to start out making a good income when you exit college, you should go major in computer science.’”

Gibbs changed majors, earning her degree in computer science, and started her career at IBM. She went on to work for the Mayo Clinic in medical records and health care information technology, getting her MBA while working full-time in Minnesota. During her time at the Mayo Clinic, Gibbs started her first business in specialty retail and catering. The entrepreneurial spirit continues to play a prominent role in her life, and she considers herself to be an expert in recognizing opportunities.

“I recognized early on in my career at the Mayo Clinic that there were only two people who seemed to be promoted into leadership: the doctors who had MDs and very, very tall males. I was neither of those things and realized I needed to make a change.”

Shortly after this realization, Gibbs applied for and eventually earned a Ph.D. in Management, hoping to affect her future teams in terms of attitudes around leadership and culture.

“Everyone in an organization is valuable and can be the source of a great idea… whether it’s a custodian, vice president or entry-level staff member. Great ideas can come from anywhere!”

Along the way, she picked up a motto that has stuck with her. “Ask for what you want,” she says. “Very few people are given opportunities without asking.”

As a faculty member at the University of Southern Mississippi, Gibbs revamped the entrepreneurship program. To prove her motto, she moved up into leadership by seeking a job elsewhere, then asking Southern Miss for a counteroffer.

Eventually her dean, knowing her goals, began nominating her for dean positions. One from UNC caught her eye with the words “innovation,” “entrepreneurship” and “Software Engineering program.”

When you talk with Jennifer Nutefall, her interests rise to the surface quickly: Social justice. Family. Pop culture. Her cat, Sam, adopted two years ago from the Humane Society where she volunteered in Silicon Valley. And libraries.

She took her first library position at age 16, going on to work in the libraries at Syracuse University while she studied to be a sports journalist. Helping people answer questions and find what they needed felt fulfilling, which kicked off a 22-year career in libraries. She partnered with faculty to build research skills into their courses, earned two master’s degrees and moved into administration. After serving most recently as the university librarian at Santa Clara University, she became UNC’s new dean of University Libraries in the summer of 2020.

“What really caught me in the job description was the focus on social justice and looking for a dean that could come in and really talk about and work through and articulate what the role of the academic library is in social justice,” Nutefall says.

Her journey with social justice began at George Washington University in Washington, D.C. As a librarian there, she partnered with a faculty member who incorporated thought-provoking service learning into a writing course. Later, Nutefall watched students “grapple” with their identities at Santa Clara, which required all students to take an experiential social justice course. There, Nutefall and her colleagues started an undergraduate diversity fellowship. 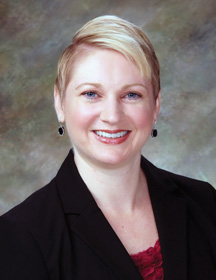 Did you know? 2021 will mark the 50th anniversary of the James A. Michener Library

“I think that it is important for libraries to take a stand on acceptance, on inclusion, on diversity,” Nutefall says. “And it’s not just in our collections, and whose voices are being heard, how things are being interpreted, who’s writing about all of that, but in terms of the speakers that we bring in, the language that we use, all of that.”

She plans to strategically approach how UNC’s James A. Michener Library and the Howard M. Skinner Music Library can continue to embrace equity and inclusion. For example, some students may not have regular access to computers, and using the library as a place to study and access computers or loaner laptops for remote classes can make a difference in their success and ability to do well in those classes.

Nutefall says UNC has already done a lot of work with open educational resources (OER) to make textbooks and other resources available at no cost to UNC students. She plans to work to open access to more research, flying in the face of traditional publishing practice.

“As a public institution, we really have an obligation to have the research done here be accessible to the public,” Nutefall says.

She’ll also work with her colleagues to develop ways to support undergraduate research.

As a 12-year-old, Jeri-Anne Lyons decided that she wanted to become a scientist and work in a hospital lab. Today, she’s not only a researcher but a leader of research as she begins her new role overseeing UNC’s research activities and helming UNC’s Graduate School.

In July, Lyons officially took over the Graduate School from interim dean (and current associate dean) Cindy Wesley, Ph.D., after former dean Linda Black, Ph.D., stepped down from the position to return to the teaching faculty of UNC’s Clinical Counseling program. 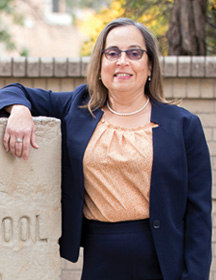 Lyons’ path through college started at the University of Wisconsin-Stevens Point — a school she describes as similar to UNC — with a degree in Medical Technology and minors in Chemistry, Spanish and Music. She went on to earn a Ph.D. in Immunology, focusing on multiple sclerosis (MS) in animals.

During her postdoctoral fellowship at Washington University in St. Louis, she worked in an MS clinic with patients and their families, continuing her research and work as a faculty member.

Most recently, as a faculty member at the University of Wisconsin-Milwaukee, she taught and mentored students, leading research on light therapy for MS patients.

“Graduate education and research really are my passions and where I really find a lot of joy in helping students through their programs,” she says.

She plans to facilitate collaborations among graduate school programs to create unique offerings for graduate students. She envisions a holistic graduate experience where students learn to be instructors, researchers, grant-writers and faculty members. She also plans to champion UNC’s best resource: its people.

“In terms of both roles, AVP of Research and dean of the Graduate School, I see myself largely as an advocate and a support,” Lyons says.

One of her priorities is growing UNC’s research activity to attain an R2 Carnegie Classification research ranking, which she says will result from supporting faculty and students in identifying and applying for funding opportunities.

“I look forward to working with the Office of Undergraduate Research to promote research opportunities for undergraduate students here at UNC,” she says. “We have strong undergraduates and strong graduate programs.”

Lyons’ interest in research makes her a great fit to continue growing UNC’s culture of inquiry and discovery.

“[With research,] you get to spend every day digging in the sandbox, figuring out what the question is,” she says. “And then playing around until you figure out what the answer is.” UNC