Leadership for a Changing World

Leadership for a Changing World

This year marks 20 years for UNC’s Stryker Institute for Leadership Development, and the program continues to make a difference for students, and gives them leadership skills to go on and make a difference in the lives of others.

As the Stryker Institute for Leadership Development prepared to celebrate its 20th anniversary in late September, it did something it has been doing since its beginnings: It gave voice to the women who have been part of its transformative efforts. Stryker Scholars were asked about the impact the program has had on their lives — and, exponentially, on the people and communities around them — and they shared an outpouring of strength, gratitude and community:

“I have grown a lot as a woman and as a professional. Coming from a family where no siblings made it to the end of middle school, and neither of my parents made it to the end of elementary, I am now blessed with a master’s degree and with a very high probability of my children also achieving a high education and a brighter future... Because of you believing in me, my life was transformed.”

“I felt crushed by the weight of being a youngish, poor single mom and that’s all I could see within myself. Stryker helped to change that.”

“I think the most impactful aspect by far is that I have agency, I have power in how my story ends. I am not alone.”

“The leadership skills cultivated while in Stryker empowered me to believe in myself and to help others do the same (including my girls).”

“Stryker helped me find my voice and made me feel comfortable in leadership positions. Now with a family and two daughters, I wish to pass on that understanding of leadership and empowerment. I also hope to show them that being in community with fellow women of color is a powerful and wonderful experience.”

The Stryker program’s work to elevate women economically, and to nurture leadership skills, understanding and agency, has transformed the lives of 524 Stryker Scholars, and in the process has made a difference for so many others.

Established in 2001 with a $1.25 million gift from UNC alumna Ronda Stryker ’76, the Stryker Institute for Leadership Development offers scholarships and leadership training as a participation-based scholarship program. It serves students identifying as women from underrepresented groups and supports scholars in their identity and leadership development. Stryker has since contributed more than $11 million to the program with an additional $4 million pledged over the next several years.

Stryker, who earned her Bachelor of Arts at UNC in Special Education and Sociology, has said that if you help a woman, you can change the trajectory of her life and her family in ways that ripple throughout her community and world. 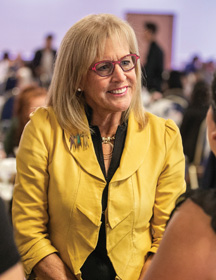 Stryker grew up with a sense of helping others. Her mother grew up with missionary parents in China; her grandfather, an orthopedist, developed tools to help others, launching Stryker Medical Corp, a global corporation.

She came to UNC in September 2001 for the dedication of the Institute in Scott-Wilcoxon Hall. “It’s more about the students than it is about me,” she said at the time. “It’s about being able to follow a dream.”

The institute has held to that ideal, giving Stryker scholars opportunities to pursue their dreams — and empowering them to enter their communities prepared to lead in their life and professions.

While a student at UNC, Ronda spent time with a migrant farm family which in part shaped her vision and served as the catalyst for her gift to UNC. She envisioned her contribution to enable and empower women from underrepresented groups who would benefit from additional opportunities and resources.

In a 2001 article for UNC’s Spectrum magazine, Stryker said, “I think it has always been part of me. Ever since I was born, I have had this thing in me to want to see people follow their dreams.”

Noemi ’02 and Elizabeth ’19 Medina — Stryker Scholars 20 years apart — developed leadership skills that make a difference in their classrooms and communities.

It was late July and like many teachers around the country, Noemi Medina ’02 and Elizabeth Medina ’19 were back-to-school shopping for their classrooms. Both teach at Greeley’s Salida Del Sol Academy, a K-8 dual immersion school where mom Noemi teaches second grade, and daughter Elizabeth is a third-grade teacher.

As teachers, they have a common interest in their students — in making their learning environment welcoming and effective and giving them a good start in school. But that’s not all they have in common. Noemi was in the very first cohort of Stryker Scholars in 2001, and Elizabeth graduated as a Stryker Scholar from UNC in 2019.

Elizabeth has memories of her mother studying with her “Stryker sisters” when she herself was about four or five years old. “I remember playing with the daughter of one of her (Stryker) sisters. We would always be underneath the table coloring while they were studying,” she says. “So, I was actually with Stryker since day one, and when I came to UNC, I knew I was going to be a teacher.”

As Noemi worked to make her dreams of teaching a reality, she got to know and work with women in the earliest days of the program, when many of the women in the program were non-traditional students with children.

“When I see Stryker now, it’s changed compared to what we did. We’d get together, study and just kind of bond,” she says. “Now, not only do they focus on leadership, but they really focus on teaching you how to own your identity, to own who you are as a person, and to love yourself for who you are, and how you can use your identity to empower you into the leader that you are,” Noemi says.

The importance of education was instilled in Noemi from a young age. Born in Mexico, she came to the United States when she was two years old and says her father would tell her and her siblings, “I’m here to work for you guys. You guys make sure you get an education.” She took his words to heart. From high school she went to school for a cosmetology license, then started taking classes to become a teacher.

She administered English language assessments for District 6 before becoming a school secretary at Billy Martinez Elementary School in Greeley. While there, she was encouraged to pursue her education degree.   “I’ve always wanted to be a teacher. That was one of my plans,” she says.

Her husband also encouraged her. “I worked during the day and at night I did my schooling,” she says, adding that her husband and mother-in-law helped with Elizabeth while she worked on her degree.

Financially, Noemi says the generous Stryker scholarship made a critical difference. “At that time, my husband was just starting his general contracting business. So, financially it helped a lot, but it also helped me become a leader, because I never thought I was a leader,” she says. “I was always more to myself, just quiet, and (Stryker) helped me bring that leadership out. I hear that from a lot of Stryker scholars, how (time together) brings joy to them because they’re able to be themselves and not be afraid to get judged.”

In addition to scholarship support, students receive a laptop computer and participate in seminars, discussions and activities that develop their leadership skills. The program also partners Stryker scholars with eighth-grade students at Salida del Sol in a big sister/little sister mentoring program.

Those moments of community and understanding are hallmarks of the program and are what so many Stryker scholars remember as life changing.

“The leadership component of the program has been here from day one,” says Yvette Lucero-Nguyen ’09, director of the Stryker Institute. “I think the lens through which we view leadership has started to be refined based on what’s happening in our society and what the needs are.”

Lucero-Nguyen, who has directed the program for the last nine years, has seen the impact Stryker has had on students and on alumni as they reach out to their communities.

“They spend that first year establishing a foundation of understanding on social justice while focusing on understanding their identities, asking, ‘How do I understand them in the context of our society, and within privilege and oppression?’ Once we have developed an understanding of ourselves through identity, we allow that to be the lens through which we begin to explore leadership in our second year. By doing so, we can better understand how we navigate as leaders, and how it’s different for each one of us based on the identities that we hold. It became a foundational piece that we realized needed to exist, to really understand how to unpack our leadership, and how to use identities as a tool for empowerment, and to be able to lead with that.”

That approach to leadership is unique.

“It challenges the traditional norms of leadership and who we identify as leaders. If we lined up a bunch of people, and said, ‘Pick out who you think is a leader. Who would that be?’ I think people are drawn to a traditional view of who that might be, just based on how they appear. And we don’t do that. We take that and say that doesn’t exist.”

It’s an approach that helps students see how, as leaders, they can support others. “It helps them to be aware of others, and their identities, and the communities they are from,” says Lucero-Nguyen. “It helps them ask, ‘How do I acknowledge and support the identities others hold,’  whether it’s in the classroom with their students, or it’s as a nurse with their patients? I hear consistently how they’ve learned to navigate as a leader and use their voice, and understanding why it’s important.”

Elizabeth Medina, who went through all four years of school as a Stryker Scholar, says that the seminars and discussions have helped her talk about subjects that may have been difficult to give voice to before.

“As teachers, we have to take it into our classroom. Our kids have to know there’s a safe haven there. A lot of the things we learned through Stryker, we actually use in our classroom with our kids,” she says. “They have to know they’re able to talk to somebody, trust somebody, and it’s okay to be themselves. And when you have a classroom like that, where they feel safe, your school year is wonderful.”

Creating a classroom that is safe creates a classroom where students can learn, and classrooms of today exist in a society that is different from a generation ago. Elizabeth says that knowing how to answer questions students are curious about has been an important skill for her.

“Last year was the first year we had a topic about sexuality come up in a third-grade classroom. Those are now the standard norms for students. It was easy for me to be able to have an open conversation with my students about it because I have the background, thanks to Stryker,” she says. “Our world is not the same, and it’s going to be constantly changing. Stryker really does help open up to that mentality that we have to continuously keep learning as adults and as humans, because we have to keep up what’s going to be coming in our world from here on out.” UNC