With the arrival of 96 new Steinway pianos and an All-Steinway School designation, UNC students have the highest quality instruments at their fingertips.

In December 2020, three large moving vans arrived on campus bearing gifts: 50 Steinway pianos were being carefully unloaded, rolled into Frasier Hall, uncrated, placed and expertly tuned. They were the final delivery of a total of 96 new Steinway and Steinway-designed Boston pianos gifted to UNC. Almost entirely funded by gifts to the university, they made UNC Colorado’s only publicly funded institution of higher education with the prestigious All-Steinway School designation, and one of fewer than 200 institutions worldwide to attain the designation.

“In a year where there’s just been a lot of hardship, it was really so exciting to watch,” Kiki Gilderhus, Ph.D., says. She was serving as interim dean in the College of Performing and Visual Arts at the time. “I walked over from Guggenheim to Frasier, and there were three trucks, two in waiting and one that was open. They had a work crew of four or five men who were moving them in. I think about the tangibility, the physicality of these pianos; there was this kind of great juxtaposition of muscle and then delicacy because, of course, these are also fragile objects.” 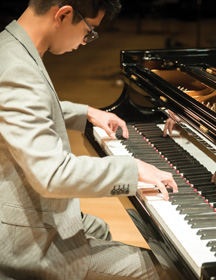 Visit the website to learn more about the All-Steinway Initiative, watch videos, and view the photo gallery.

Gilderhus describes the moment the pianos arrived as “an unfolding.” For her and others involved in the project, that unfolding brought with it a sense of both culmination and possibility: of instruments waiting to lend voice to gifted UNC students and faculty after a long, quiet year of remote and virtual music.

From Astoria to Greeley

At first, the idea of an All-Steinway School seemed distant. In 2007, Professor of Piano Lei Weng, Ph.D., joined the faculty at UNC. A Steinway Artist, he remembers mentioning the All-Steinway School designation to Michael Alexander, who was then the School of Music Director, about a year later.

“I knew how much this meant to the school, to our students, to faculty — how much it would change the whole school and what kind of service it would provide,” Weng says.

Just about a decade later, Bob and Bonnie Phelps came to campus. Their son had graduated from UNC in 2012, and they had a deep sense of appreciation for the education he received and the experience he had at the university. As donors, they had worked with the College of Performing and Visual Arts leadership team for a couple of years to identify and purchase instruments, technology and equipment for the Schools of Music, Musical Theatre and Visual Arts. On that day in 2017, they came to campus at the invitation of the university to meet students who benefited from the new instruments and equipment.

Gilderhus remembers the day well. “I felt such incredible pride and gratitude. So often in administration you’re so concerned with minutiae, and you don’t always have the opportunity to see how students are being impacted. That day sparked future conversations,” she remembers. “We started to really talk with Bob about how we could achieve the All-Steinway School designation.”

The Phelps were inspired by the impact an All-Steinway School designation would have on students and by the doors it would open for UNC as a premiere performing arts program.

Steinway’s audit of the university’s piano fleet at the time revealed most of the pianos to be in poor to fair condition.

“We collaborated with the PVA leadership and the Office of University Advancement to create an action plan which became ‘The Steinway Initiative.’ It would require almost $1 million in fundraising from private donors to update and replace almost 90% of the university’s inventory with new pianos from Steinway & Sons,” Bob Phelps says.

The Steinway Initiative reflected the Phelps’ longtime support of many campus needs, including the Campus Commons project, which created the perfect setting for a beautiful Steinway D concert grand piano — also funded by philanthropic support. It would be the first of the new Steinway fleet.

Both Weng and Zukiewicz explained that each piano is different and selecting one can be a very personal process.

“Steinway pianos are handmade using the highest materials,” Weng explains. “The process is very consistent; however, every piece of wood is different… each worker, they are different. Each piano is different, just like a person born with a fixed set of DNA. That also exists in Steinway pianos.”

Zukiewicz says, “I think what makes a piano and an instrument really special is its capacity to express the variety of emotions, that variety of sounds, and it allows us to express our emotions through that with relative ease and clarity.”

He remembers sitting down that day to one particular piano in the showroom. “It was like a magnetic feeling. It’s like you try something, and you’re just like, ‘Oh, this is nice.’ Then you try something else, and it’s, ‘Wow, I didn’t know this has this color that I can produce.’ You develop this personal connection with an instrument, and it talks to you. You give it something, and it talks back to you. That’s the intimacy of the relationship that you have as a musician with your instrument.”

It was that piano that Zukiewicz, Weng and Landry agreed was the one they wanted for UNC’s Campus Commons Performance Hall.

“Carnegie Hall is very famous for having one of the best pianos that you can imagine. Their pianos are usually handpicked by some of the best artists. The day after our concert, I went to select our piano. In my ears, I had that instrument that I just played on (at Carnegie Hall), and I can tell you that, compared to that instrument, we got a better piano. That says a lot, I think.”

The Steinway Model D is now one of two pianos presiding over the performance hall at Campus Commons. Its arrival on campus elevated the vision for an all-Steinway fleet of pianos.

“There was this sense that if students are going to perform on an instrument of this caliber, then think what they could achieve — and what it would do to add to the prestige of UNC’s already acclaimed School of Music — if all of the pianos were of the same quality,” says UNC’s Vice President for Advancement, Allie Steg Haskett. “Philanthropy — led by the Phelps — made that vision a reality, and it was so exciting to see nearly 100 new pianos arrive on campus.”

The pianos provide students, faculty, visiting artists and prospective students with high-quality consistency that helps them grow as artists and reach their potential and are making an audible difference in the lives of the students who are playing them.

“These pianos allow (students) to produce better music, express themselves more clearly, find more varieties of sounds, express their emotions in more diverse ways, and really engage much more with the music through having a high-quality instrument,” Zukiewicz says.

Weng explains that quality can reflect a student’s true ability. “The keys can respond to your touch in hundreds of ways,” Weng explains. “You put a little pressure, a little quicker, a little slower, your finger position changes from more vertical to more flat — it is all reflected in the sound. This is like magic. So, you see, now they’re playing the magic.”

The students can feel the difference. Masters student Yuan Li says the pianos allow her to express herself more fully. “The Steinway pianos are one of the best in the world. And when I perform on this piano, I just feel like it can really give me so much more, that can fulfill my imagination in the tones, in the sound and color. So actually, I can really achieve what I’m aiming for on this instrument.”

Looking to the future — for both current and future students, as well as the entire university community —  there is a sense of anticipation after a year of quiet isolation.

“We’ve had to find lots of different ways to continue to practice, to compose, to perform, to reach out to audiences and make connections,” Gilderhus says. “And right now, it’s largely digitally or through computers. But the thing that I think has been sustaining is the gift of these pianos. This is a gift that’s waiting for that moment where we start to open up again. This is a poignant moment. We’ve not been able to have live performances for a year, and so there’s this pent-up kind of desire to really see these pianos in action and to see the art that’s being created and experience that.”

Whether it’s students experiencing the opportunity to play or audiences experiencing the difference these pianos make in the performance hall, there’s a sense of promise that resides with the pianos, a sense that their gift to the community is waiting for the moment when they can be played — and heard — together.

“The experience is just unlike anything else, to hear the sound,” Weng says of the new pianos. “Even the best technology cannot deliver that. The sound surrounds you 360 degrees — there’s no gap, you are in the sound. Can you imagine? It’s not a speaker coming from here, or here, or here, but the real sound of the piano. It surrounds you and embraces you.” UNC