In mid-February, when the landscape outside UNC’s Campus Commons was a monochromatic winter palette, artist and UNC alumnus Armando Silva ’10 was at work creating a mural inside the building that would commemorate the César Chavez Cultural Center’s 35th anniversary. When he finished, the white expanse of wall across from the building’s main entrance had been sparked with vibrant colors and a portrait of the center’s long-time director, Patricia Escobar.

The mural, titled “Somos Porque Eres” (We Are Because You Are), is layered with meaning, colors and words intended to evoke a sense of welcome, acceptance and home, and to encapsulate culture, caring, activism and a legacy of “paying it forward.”

“The mural has actually been student-led, and a lot of it started with our student staff here,” says Joél Orozco Almeida, CCCC’s associate director, adding that students Ydrenni Caparachini and Miriam Renteria Gonzalez, both seniors in Mexican American Studies, were instrumental in carrying the project forward since its inception in fall 2020.

Once the location was approved with the enthusiastic blessing of UNC leadership, Silva began to conceptualize options with the students. The idea of Escobar’s portrait being central to the mural was one that resonated.

“When folks — especially students — thought about what ‘paying it forward’ looks like, they thought of Patricia, who has been the at the Chávez Center for 25 years, and director for 13 of those years, and she is just like the epitome of someone paying it forward,” Orozco Almeida says.

Silva placed words throughout the mural, and close to the portrait of Escobar is one that many students connect with her.

“‘Mijita,’” Silva says, “is like ‘my little daughter,’ or ‘my sweet daughter.’ It’s very endearing, and it’s one of those words that Trish uses when she’s engaging with a lot of her students. But that can also be something just in the Spanish-speaking community that is very endearing. It feels very welcoming. It feels very like, ‘I’m your elder, but I’m going to take care of you. I’m going to welcome you into this space.’” The mural was revealed via a Zoom meeting on February 18, surprising Escobar, who didn’t know that she was the subject of the mural.

“It’s me! Oh my, I didn’t know. Oh my,” she said, removing her glasses to wipe away tears.

“It is a tip of the hat, a thank you, to Trish for being that force, that energy, that allows us to continue to be ourselves; to celebrate everything that is around that soul, that estrella, that comes from the Cultural Center itself,” Silva says. 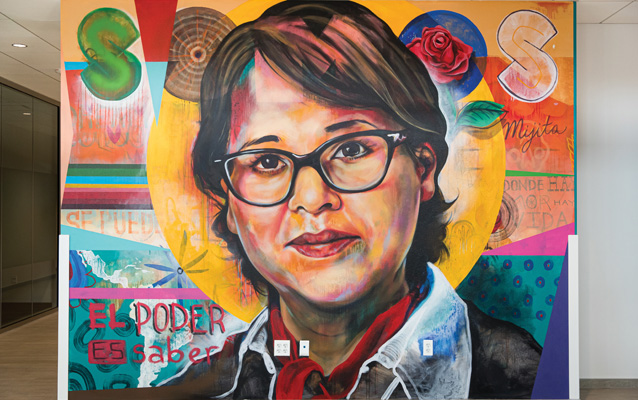