Lieutenant General Carol A. Mutter was the first woman to be nominated to a three-star rank in the U.S. military, the first woman promoted to three-star general and an inductee in the National Women’s Hall of Fame. Throughout her life, she’s pursued excellence. Now, in her retirement, she continues to help others do so by sharing both her story and her time.

Born and raised in Colorado, Mutter decided to pursue a math degree at UNC because it was close to home and affordable, and she wanted to follow in the footsteps of a female junior high math teacher. But, then she was recruited into a summer program with the Marines at a time when less than 1% of the Corps was women. That summer turned into a 31-year career in the Marines.

When she went to Officer Candidate School in 1967, Mutter says, women took a limited role when it came to combat training. 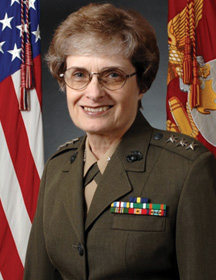 General Carol A. Mutter was also featured in the June 1996 issue of UNC Magazine, then called Spectrum.

“We did go to the rifle range, and we were taught which end of the weapon the bullet comes out,” she says. “We got to throw grenades, too. The men stood back. They were a little concerned.”

Her math degree led her to work along other avenues. She started out working with computers and trained other women officers. She continued adding to her toolbelt, taking on a variety of roles as she moved bases with her husband, Colonel James Mutter. She studied strategy and tactics and how to fight wars, and she handled logistics and finances.

“If you’re comptroller for an organization, you know everything that goes on in your organization because they can’t do anything without spending money,” she says.

She enjoyed the work and agreed with military values, so when her initial three-year contract ended, she stuck around. She says that the Marine Corps’ relatively small size and budget meant they were particularly open to innovation, such as having a woman lieutenant general.

In addition to her range of knowledge, her leadership and decision-making tactics made her an ideal candidate for the three-star role.

“First, I ask a lot of questions. I do my homework. I try to learn as much as I can about the question at hand, and then I make sure I know when I have to make the decision,” she says. “I like to try to talk to those who would disagree ahead of time, before the decision becomes public, as much as possible. So that they’re not blindsided, and they understand why I made the decision contrary to what they recommended.”

Since retiring in 1999, General Mutter spends a lot of time volunteering along with her husband.

“You can work a lot of hours when you work for free,” she says.

In addition to giving speeches and traveling, they work with schools to encourage girls in STEM and support organizations such as Women Marines Association (Mutter was formerly the president) that help veterans transition back into civilian life. She says that transition can be especially difficult for women.

“People don’t think of women as military veterans or as veterans who have gone through a combat experience, seeing some of those nasty things that it’s hard to get over,” she says. “There’s not even enough of assumption to ask the question, did you serve, are you a veteran? If you’re wearing a Marine Corps T-shirt, is that your husband’s or your son’s T-shirt? Not yours. So, that makes it real difficult.”

Fortunately, both General and Colonel Mutter could understand their spouse’s experience to a large extent, and their support for each other served them well. She calls him her best mentor and friend. He retired before her to support her career.

“He says the care and feeding of a two-star general, let alone a three-star general, is a full-time job. So he had to quit to take care of me,” she says. “People get their money’s worth out of the senior military and their spouses.”

But she would tell you that being a Marine is worth the sacrifices.

“It is not easy to become a Marine, and Marines believe our own public relations,” she says. “We believe we’re the best, and having been able to be a Marine for over 31 years was very special.”