UNC alumna Grace Franklin started a new job during a pandemic — and joined a team effort to keep her community healthy.

In February 2020, Grace Franklin ’15 had just stepped into her new role as the public health director for San Miguel County in southwest Colorado. She was excited about the opportunity to revamp the county’s programs in family planning, WIC (Women, Infants and Children), and immunizations.

But two weeks into her new job, Franklin found her plans for shaping the community’s health system derailed by a global pandemic — something that wasn’t on her mind when she was setting her career path.

Originally from San Diego, Franklin earned her bachelor’s degree in Conflict Resolution before enrolling at UNC in 2013 to pursue her master’s through the Colorado School of Public Health.

“The concentration at UNC is community health education, which was very appealing to me — how you communicate in a way that will resonate with people to make healthy behavior changes an automatic choice,” she says. 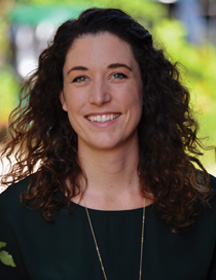 “We have folks coming from all over, with different understandings, different policies and different expectations about this disease and its containment.”
–Grace Franklin ’15

Her advisor worked with her to create a customized approach to her studies. “She was like, ‘This is what you’re interested in. This is how we can take these concepts and help build your knowledge base,’” Franklin says. “(Faculty) really encouraged me to stretch myself, come up with ideas and be innovative.”

A graduate assistantship and an internship also helped her find her focus.

“I did a lot of work with one of my adjunct professors and did my internship with her at a local nonprofit called Look Both Ways, which is a Loveland-based sexual health education nonprofit.”

That internship led Franklin to work with the Colorado Department of Public Health and Environment and, eventually, to her new role as public health director for San Miguel County. She arrived there just as COVID-19 was emerging as a public health threat, and it took priority over everything she planned to work on.

“The first two weeks coming into the pandemic, it was fairly chaotic,” she says, adding that, as a newcomer, she hadn’t had the opportunity to build relationships and was still learning about the community.

“It’s a rural frontier community that has a strong tourism economy. From the mountain town of Telluride all the way out to the ranches in Egnar, the needs vary significantly. And the risks for the spread of this virus vary, as well. I didn’t really know that or who to talk to,” Franklin says. “But, the beauty of this place is that because it’s so small in number and people lean on each other, the sense of community is tremendous.”

In March, one of the challenges they faced was turnaround on testing. “The ability to test folks and understand how the disease was spreading was the biggest bottleneck. There would be times where we did the nasal swab test to see if there was an active infection. It would take three weeks to get a test result. By that time, it’s useless,” Franklin says.

Meanwhile, Colorado mountain communities with ski resorts were making headlines for COVID-19 outbreaks. But with the bottleneck in active case testing, they couldn’t easily determine their population’s exposure. Then, two community members who own a biotech company offered a solution.

“They reached out to us and said, ‘Hey, we don’t have active contagion testing, but we do have an antibody test we’ve been developing, and we’d love to offer it to our entire community,’” Franklin says. “They provided the lab processing and transportation of the test for free, and then the county paid for the supplies for testing and the staffing to administer it.”

The test, which requires a blood draw, looks at a person’s immune response specific to this coronavirus strain. Out of a population of 8,000, there were 5,500 people tested from throughout the county.

“We were the first county in the nation to do such wide-sweeping testing,” Franklin says. Much to their relief, the results in late March and early April told them that San Miguel County had a fairly low infection rate. And, with a statewide stay-at-home order, those numbers remained somewhat contained until mid-summer. Then, as with many communities, those numbers began to climb, and communication and education efforts continued to be key initiatives — and a challenge in a tourism community.

“We have folks coming from all over, with different understandings, different policies and different expectations about this disease and its containment,” Franklin says. Trying to help educate the constantly changing tourist populations required continual efforts by the community and local businesses.

Another challenge was rooted in a language barrier. “We have over 20% Latinx population. Really early on, we saw they were disproportionately being affected by this virus… But we were like, ‘OK, we’ve got this. We have some Spanish, speaking educators.’ But we have a whole subset of folks from Guatemala who don’t speak Spanish as their primary language. They speak a language called Chuj. We were missing this entire subset. So, we saw a spike really early on in this Guatemalan community just because we weren’t getting the information to them that they needed,” she says.

“We recognized a gap in care for people to get the critical information needed in the language and method that they prefer,” she says. “By intentionally building an outreach campaign that responded to the needs of this often unseen population, we were able address the needs of the community as a whole.”

The challenges across socioeconomic and cultural diversity meant Franklin and her team had to respond nimbly, and she says that her education at UNC offered her hands-on experience that has made a difference in how she was able to meet that challenge.

“UNC is extremely special and unique in the sense that it has such a tailored experience,” Franklin says. “A lot of the classes connect you with other community organizations that need help, and you’ve got to take concepts and actually put them into action. And then you digest it and learn so much more from it.”